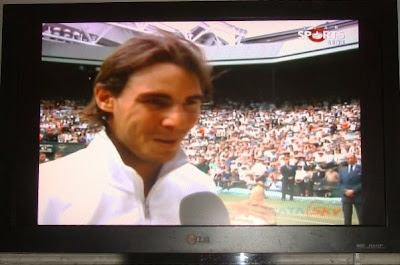 I better go have dinner. That Wolverine movie is coming up soon. It's the husband's turn to put up with stuff now :)
Email ThisBlogThis!Share to TwitterShare to FacebookShare to Pinterest

I so agree... Tennis is such an elegant game :) But surely you enjoy soccer as well... never mind the vuvuzelas!

What's sports without passion and emotion....??
personal opinion but I like it the opposite way....

But only football had Paul the octopus with the secret sagely smile. Surely, you liked that

Agree on that crazy humming vuvuzelas. One of the reasons why I sit far away from the TV when my son (and wife) puts on the football match.
As for the silence in Tennis, I think it could be because it started with Wimbledon and some one from the royal family will be in the audience and we can't have all that hooting and shouting in front of her highness can we?

Your comments on football,cricket are hilarious and yes, the elitist like tone in reasons for loving tennis are well stated. Nice, offbeat post :)