Marriage? We want Indians only :)

Am I the only one who finds matrimonial adverts fascinating?

Here are four ads from the Hindustan Times.

The first two are from Indian boys living abroad who want to marry girls from India. This of course, is a common phenomenon - taking a 'family-oriented' and 'cultured' bride from India is the norm (as opposed to the wild American memsahibs, I suppose, he he).

But the last two ads are from Indian girls abroad, who are looking for boys from India. I must confess, I was a little surprised.

Hmm, hmm. The boy wants someone sophisticated, attractive, well-educated, career-minded, but *also* family-oriented. Looks like his parents wrote the ad.

The girl's family must be educated and accomplished? OK, whatever :)

Hmm, what do we have here?
A girl studying medicine in the USA. Would like to "explore the possibilities of meeting prospective persons" on her India visit. I like the sound of that :) I think she wrote this herself, maybe. "Boy must be well educated". Nothing about the boy's family, he he.

These ads, by the way, are from a special column in the matrimonials reserved for NRIs (overseas Indians). The column occupies significant newsprint space. Obviously it's not just a few odd-balls who still yearn for India. It's interesting to watch how the Indian diaspora grows, but never really separates from the motherland. I wonder what "cultural values", if any, these new brides and grooms are exporting from India.
3 comments:
Email ThisBlogThis!Share to TwitterShare to FacebookShare to Pinterest

Alone, white and female in India

On a travel forum recently, a young Polish woman asked: "I am planning to go to India and would be grateful if you could tell me whether it is safe for me to go there alone. If someone has any experience in travelling on his/her own, please post your comments"

Lots of people offered her advice; most of which centred around dressing modestly (preferably in a salwar kameez!), not getting too familiar with strangers, avoiding isolated areas and dark alleys, and so on. Among the many people who offered advice, there was one gentleman who suggested she carry pepper-spray. This led to a protest by some others - What?? Pepper spray!!?? Why are you scaring tourists away from India?? - and so on.

Co-incidentally, I had just been reading a city magazine, a 'Women's Special', with a whole page devoted to staying safe in cities - and among the five things they listed was pepper spray! 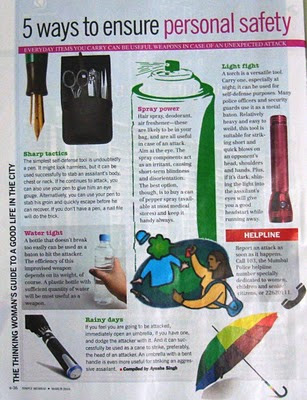 So what's the right advice for this lady? Should she stick to big cities? Are they safer, or are they more dangerous than smaller towns? Are some states safer than others? As I heard various points of view, I felt obliged to conclude that there is no single truth when it comes to female safety in India.

But that doesn't mean there are no conclusions to be drawn! I travel alone, frequently, to different parts of the country, and from my own interactions with men, I find that some parts of the country are disconcertingly hostile to women and disparaging of their bodies, whereas other places are a delight.

I was in Orissa recently, and I have to say I did not encounter one single lecherous man; it was a fantastic experience. I have spent two years in Calcutta, again, without so much as a single nasty incident in spite of late nights and odd hours.

I would rank Uttar Pradesh, Haryana, Rajasthan and Delhi among my list of difficult places for solo women travellers. (I have not been to Bihar, but I confess I have no great expectations from the state that produced Laloo Prasad Yadav). Other than Orissa and Bengal, I would rank Kerala among my nicest travel experiences, followed by Tamil Nadu, Andhra Pradesh, Karnataka, Maharashtra and Goa (in no particular order). I have no experience of the north-eastern states.

Of course, this is all based on personal and anecdotal stuff, and is therefore open to bias, but I suspect many Indian women would agree with me. If you don't agree, that's fine too. There is no necessity for consensus here. Irrespective of which state is better and which is worse, what I'm trying to say is that there seem to be some regional trends in the behaviour of men towards women.

I am puzzled by these differences. Surely we are all not that different from each other? Maybe it’s just that places which are more hidebound and stuck in the dark ages are more difficult for women? With a social structure that does not value women, it is that much more difficult to get the basic respect you deserve. But Tamil Nadu with its high female foeticide doesn't value women either...so it's hard to explain why I feel safer in Chennai than in Delhi. Again, this is also a sweeping generalisation. Some parts of Delhi (and I am writing this sitting in Delhi) are extremely safe and very nice to be, and some very nice guys I know are from Delhi. But I don't feel the same "body freedom" in the crowded lanes of Chandni Chowk as I do in the equally crowded Pondy Bazaar or Bhuleshwar or Gariahaat markets. Why? I wish I knew.

Sigh - so - going back to the young Polish woman - while there is no single truth about the Indian men she will encounter, the fact remains that she is likely to go through some not-so-pleasant experiences if she is travelling solo. Let's face it, this is a difficult country for single white women to travel. The average Indian man assumes that white women are alley cats and are potentially available - why else would they flaunt their bodies in public places, right? To add to this is the depressingly common lesson which most young men receive at the hands of their older friends - that's it's perfectly alright to ogle and whistle and grope and treat women badly. Indeed, it is very *masculine* to do so, as Hindi movies so brilliantly illustrate. It's not just white women who get the lecherous idiocy - the same disgusting treatment is accorded to very modestly dressed local women as well. It's a grim story, and one that always makes me want to decimate the entire male race :)

To the lady who asked the original question, I say, pack that pepper spray, girl! You may not need it, but you'll feel better with it in your purse.

4 comments:
Email ThisBlogThis!Share to TwitterShare to FacebookShare to Pinterest

It's a fairly standard story - tigers come into conflict with humans, prey on valuable livestock, and in response, the tigers are poisoned.

The latest to die are two young male tigers who w 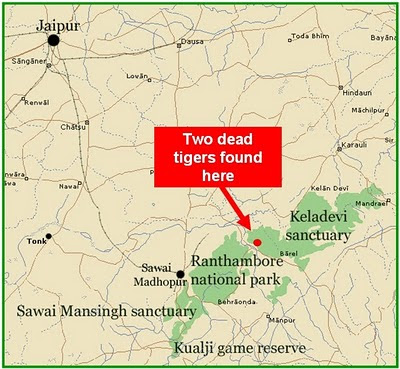 ent into the Keladevi Sanctuary, perhaps looking for new territory.
.
The Keladevi Sanctuary is the buffer zone for the Ranthambhore tiger sanctuary. The river Banas divides the forest in this area into two. To the southwest of the river is Ranthambhore National Park and to the northeast is Keladevi.
.
There are just 5 Gujar families in the area where the two tigers were killed. Gujars are primarily herdsmen; they live in small settlements in the forest. Some of them have been arrested for this killing.
.
But why blame them? What would you do if two scary predators came within a whisker of your livestock and family? Can you see yourself doing anything different?
.
Apparently, these two tigers had been visiting that area for the past one and a half months, and preying on livestock. The forest department did nothing. No compensation was given, and no discussions were initiated with the Gujar families to keep them or their livestock safe. No wonder they tied a couple of goats as poisoned bait!
.
Clearly the real problem is with the system, with forest department authorities who don't know their elbows from their backsides! Poor funding, poorly trained staff, poor tracking, and appallingly poor management of the forest, its people and its animals!! 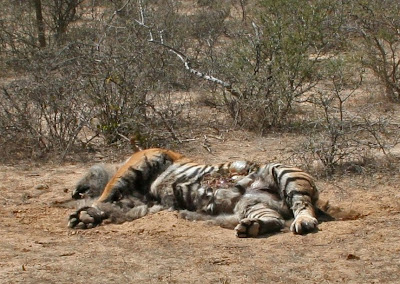 Photo by Giriraj Sharma, eTV. The full story is here, if you want to read it
4 comments:
Email ThisBlogThis!Share to TwitterShare to FacebookShare to Pinterest
Newer Posts Older Posts Home
Subscribe to: Posts (Atom)