Recently I saw this poster of a tiger for the Incredible India tourism campaign:

I burst out laughing, thinking of all the *very* polite, *very* vegetarian Indian IT professionals I know. If you're working in financial services, or information technology, or BPO, chances are, you'll have met some of these guys. Armed with laptops and packets of MTR ready-to-eat veggie upma, they periodically set out to conquer the West, but return gratefully to India (and the delights of home cooked food) at the first chance that presents itself.

I shouldn't laugh, though. Until recently, I was one of them. Every time I travelled, it was bread, fruit and cheese until I came back home to rice and chappati and my blessed dals and veggies. As my forays abroad grew more frequent, I learnt to hunt for Italian, Mexican, Lebanese and other cuisines, gradually becoming more and more successful in fending for myself.

These days, I'm no longer travelling abroad as much. Instead, I watch with interest (and some amusement!) as tourists of different nationalities, tastes and interests, grapple with Indian food.

Almost every tourist is surprised by the sophistication and variety of the vegetarian cuisine they encounter. The most frequent thing I hear is "Lord, I could be vegetarian here forever!" (and the happiest, loudest cries of delight seem to be from American vegetarians, don't ask me why). 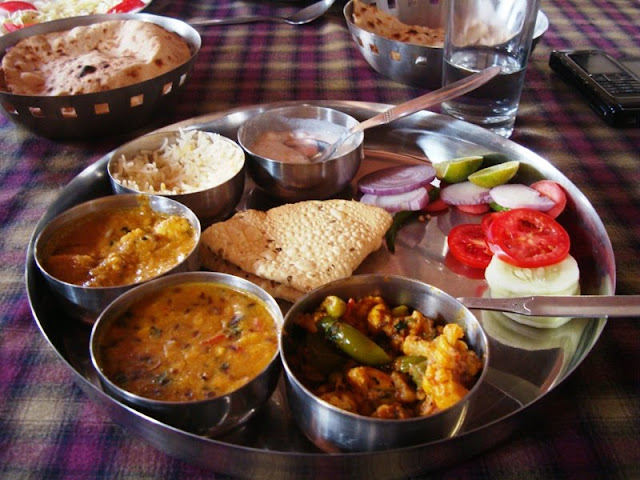 The excellent veggie thali meal at Hotel Sunbird in Bharatpur

I confess I am baffled by how widely popular vegetarian cuisine is in India. This is totally in contrast with other countries in the world, where vegetables are something that you force yourself to eat.

The markets here are full of interesting vegetarian options - for example, walk into any market in Delhi and you'll see something like this:

Fresh vegetables arrive daily at the market, and eagle-eyed men and women come shopping in the evening inspecting them with practised ease 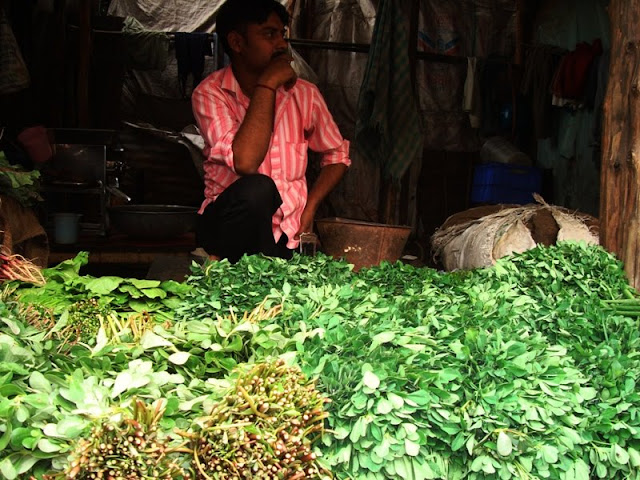 Different varieties of leafy greens are popular - these are chopped and added to wheat flour to make spicy flavoured parathas, or pureed to make saag, ground into chutneys, or simply used as garnish 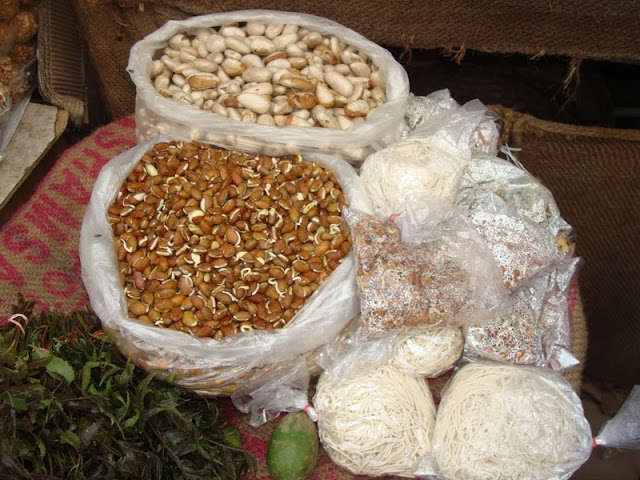 Sprouts and beans of different types are cooked with onions, tomatoes, garlic, green chillies, ginger and coriander to make amazingly tasty dals
The markets are proof enough - Indians eat a lot of vegetarian food, with sprouts, legumes, vegetables and milk products dominating the meal. Even "non-veg" Indians eat a lot of vegetarian food. The frequency of meat / chicken / fish dishes differs from house to house; in some cases it is once a week, whereas in some houses there is a daily non-vegetarian dish. Most Hindu homes have vegetarian breakfasts, with non-vegetarian food typically reserved for lunch or dinner.

Meat does not comprise the main dish in India in the sense that Westerners understand it - there is really no Indian equivalent of a large steak. In non-veg households, the star of the meal is a meat or chicken side-dish/curry, which is eaten with rice or roti. Or the meat is added to a biryani or pulao.

In comparison with people from other religions, Christians and Muslims eat more non-vegetarian food, including at breakfast. But even their diets have a significant vegetarian component. The only places that do not have a predominantly vegetarian cuisine are our coastal regions where fish is a standard element of literally every meal.

So anyway, where did this vegetable and legume diet come from?

I am told it's plain economics; that Indian diet has many vegetarian elements because most Indians cannot afford a meat based daily diet. But when you look at China, or any of the countries of the Far East that are just as poor as India, you see that their cuisines are dominated by non-vegetarian food. The Vietnamese, for instance, have similar per capita income as India, but have 5 times as much meat in their diet. Clearly there's something else going on in India.

There is a view that this is the influence of Buddhism and Jainism. Pshaw, I say. The Jains and Buddhists make up only a very small number of Indians; and there are not enough of them to create any food trends. Besides, almost everywhere in the world, Buddhists eat lots of meat, fish, and indeed, if the Far East is anything to go by, anything that moves.

Among Hindus, it is only the upper caste Brahmins who have religious reasons to be purely vegetarian. The vast majority are not required by religion to be vegetarian (except on certain festival days and occasions), but they still eat a lot of vegetarian food. Is it religion that drives the daily menu of a house towards many vegetarian foods? In part, yes, but I really don't think it is the full picture.

I think I'm going to settle for a more prosaic explanation, unless any of you can educate me otherwise. We eat so many vegetables and pulses and legumes simply because that's the way it has always been. "We are like that only". Whether we are "veg" or "non-veg", we make the most of the wide variety of veggies in the market. We cook them in interesting ways, cut them into pickles, we roast them, we mix them with dals, spice them up, mash them into chutneys, fry them into finger-licking snacks, and we thoroughly enjoy all of it.
15 comments:
Email ThisBlogThis!Share to TwitterShare to FacebookShare to Pinterest
Newer Posts Older Posts Home
Subscribe to: Posts (Atom)