My guide to Delhi's museums is now online on tripadvisor:
http://www.tripadvisor.in/Guide-g304551-k340-New_Delhi_National_Capital_Territory_of_Delhi.html

Before The Imperial hotel came up in 1936, the most luxurious hotel in Delhi was Maidens in the Civil Lines. Built in 1903, it was called Maiden's Metropolitan at that time. Along with the Cecil and the Swiss Hotel, it was among the few Western-style hotels available for Europeans visiting Delhi.

Maiden's Metropolitan was owned and run by a certain Mr. J. Maiden, who was fully involved in the day-to-day management of the establishment (and made a point of highlighting it as a major advantage). Shades of racism of course, assuming anything with a Sahib at the helm was somehow better. But perhaps I am being too sensitive. Maybe Mr. Maiden was only reassuring his customers they would be with someone culturally familiar, while negotiating a strange country. In any case, those were the days of the Raj, and I am more willing to forgive racism in an earlier era than today.
The hotel was open only during the winter. In summer, the hotel shut down operations, while the firangis of Civil Lines made their escape to the cool environs of Shimla (the summer capital of the British).

The primary advantage that Maiden's Metropolitan had was its location. It was right opposite Ludlow Castle (the British Residency). The rail station was also nearby. For visiting dignitaries and their entourages, it made perfect sense to be based at Maidens. In 1879, for example, the American president Ulysses Grant visited Delhi. They arrived by train from Agra, and were received ceremoniously. Grant and his wife stayed at Ludlow Castle, but their retinue found accommodation "in the hotels around the rail station".
I found an old advertisement for Maidens in John Murray's Handbook to India, Burma and Ceylon (published 1911). Long before Lonely Planet and Frommers, Murray's Handbook was a major source of information and travel tips for visitors to India. The first book came out in 1859, and several additional books came later. Every big hotel worth its name placed advertisements in Murray's handbook, and Maiden's was no exception. Note the room rates at the time: Rs 8 per night!
The advertisement says "This Hotel is owned and managed by an Englishman of long Indian experience, who devotes his time solely to one establishment and has no connection with any other Hotel in India." This is of course, a dig at the Cecil, whose owners (the Hotz family) ran several other hotels (Cecil Agra, Wildflower Hall and Cecil Shimla). Mr. Maiden wanted to point out that their attention was obviously divided :)

Here is Mrs. Hotz's advertisement for Cecil in the same book: 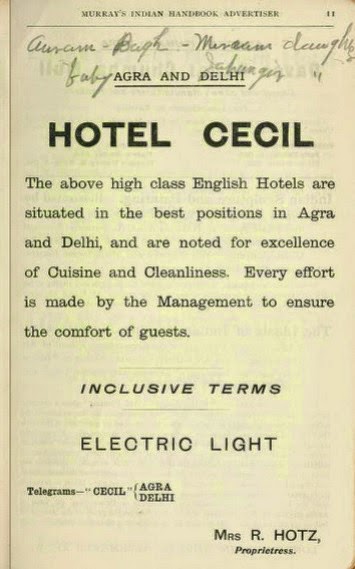 Both Mrs. Hotz and Mr. Maiden were obviously keen to highlight how modern their hotels were. Maiden says, "Electric Lights and Fans have been added, which convenience will be much appreciated, and show the up-to-date character of the house". The Cecil advertisement has "ELECTRIC LIGHT" written in allcaps :) Electricity had come to India only in the late 1800's, and that too first in Calcutta and Bombay. So these hotels were probably among the earliest buildings in Delhi to have electricity.

Maiden also made a big deal out of his "Fireproof Garage, with pit, free for use of Visitors' motor cars". There were very few cars in India at the time. Automobile manufacturing began in India only in the 1940s, so at the time this advertisement appeared, there were probably just a handful of cars that some maharajas or Englishmen had imported into India. Maybe these autos were not all that safe, and hence the fireproof garage!

There are three customer testimonials in the Maidens advertisement. The last one is from a guest who has returned after 12 years, and he says "I have been most comfortable in your new Hotel, as in the old one, and hope to see you again soon". There were actually two Maidens hotels. The first hotel was run by J Maiden and his brother. The second, the one that survives today, was run only by J Maiden. What became of the first hotel (or of the brother), I don't know. It is likely that the older hotel was modernised and relaunched in 1903, in anticipation of Lord Curzon's grand Coronation Durbar celebrations.

Maidens still survives today, it is run by the Oberoi Group now, and is classified as a 4-star hotel.  If you are looking for a heritage hotel experience in Delhi, but don't have the budget for the (much) fancier Imperial Hotel, then Maidens is a very good choice.
3 comments:
Email ThisBlogThis!Share to TwitterShare to FacebookShare to Pinterest
Labels: British Raj, Civil Lines, History of Delhi, Hotels in Delhi
Newer Posts Older Posts Home
Subscribe to: Posts (Atom)