Kahani Kabab Ki - the story of the kabab in India

It is the month of Ramzan now. During the daytime, Old Delhi's Muslim neighbourhoods are quieter than usual, as people stay indoors in the blistering heat, fasting all day long. Not even water is drunk. In the evening, the city cools down, the day's fast is broken, and people gather in large numbers around the many street stalls offering treats.

I was curious about the origins of the word kabab, so I did some digging around. It turns out that the word kabab is actually very old - its roots go back to the ancient Akkadian language, in which kababu means to fry or burn. The Akkadian Empire, dating to around 2300 BC, ruled over what is now Iraq, Turkey, Syria, and parts of Iran. The word kabab also exists in other old languages, such as Aramaic and Persian, which were spoken over a wide geography. It exists in Arabic, which is believed to have developed into a distinct language somwhere in the 3rd century AD. It also exists in Turkic, which between 6th - 11th century AD spread across Central Asia, covering a vast geographical region.

Thus, starting from ancient Akkadian, it appears that the art of spitting and roasting meats has existed continuously for at least 4500 years. The kabab was thus a familar dish among people spread over a very large region, ranging from Egypt to Mesopotamia to the Middle-East.
In India too, the spitting and roasting of meat was well-known. Meat was a significant part of the diet of the Indus Valley civilization, although we don't know if they called it kabab (because we have not yet deciphered their script). During the Mature Harappan period, colonies of Indian traders were established in the Persian Gulf port cities, and even in Mesopotamia. So it is possible that they had at least heard the word kabab :) :)

Based on the archaeological record, we know that the Harappans ate fowl, cattle, chickens, sheep, goats, deer, antelopes and wild boar. It's reasonable to assume that they knew how to grill and cook meat in various ways. Meat skewers have not been unearthed in any Indus Valley sites. But ovens have been found, both small and large, and we can assume that bread and meats were cooked in these ovens much like modern-day tandoori cooking.
Ancient Indian literature also contains many references to grilling, frying and cooking meat. In the Ramayana, there is a passage which describes a meal thus: Cooks, under the supervision of diligent stewards, served large pieces of meat roasted on spits, meats cooked as curries, and sauces made of tamarind and pomegranate; young buffalo calves roasted on spits with ghee dropping on them; young buffalo calves fried in ghee, seasoned with acids, rock salt and fragrant leaves; large haunches of venison boiled in different ways with spices and mangoes, and sprinkled over with condiments; shoulders and rounds of animals dressed in ghee, sprinkled over with sea-salt and powdered black peppers, and garnished with radishes, pomegranates, lemon, fragrant herbs, asfoetida and ginger.

It looks like our ancients were pretty good kababchis themselves :) They liked roasting and grilling spitted meat over flames, as well as cooking it into curries.

Coming back to the word kabab: it is likely that this word made its way again into India in a more recent phase, after we came into extensive contact with the Arabic, Persian and Turkic language.

In 711 AD, the Arabic-speaking Umaiyyad commander Muhammad al-Thaqafi conquered Sind, and thus established the first sustained Indian contact with the Arabic language. The word kabab may have entered the vocabulary of India through that source.

India's first sustained contact with Persian language came in the 11th century AD, when the Ghaznavids established themselves in Punjab. The first Turks came to India with Muhammad of Ghor in 1175 AD.

From 1206 AD, when Delhi was ruled by the Ghurids, Mamluks, Khaljis, Tughlaqs and Lodis, Persian was the official language. Turkish was spoken in the bazaars, and Arabic was the liturgical language taught in schools. During the Mughal empire, the official language used was Persian, although both Turkic and Arabic were in use. In the south of India, the rulers of the Deccan Sultanates also used Turkic, Arabic and Persian.

It is my conjecture that between the 8th century and the 18th, the word kabab became widespread in India through these contacts. The entry point was probably "Hindustani", a hotch-potch language which arose in the 11th century AD, through contact between the local Indian population, and various invaders, traders and religious men who settled in Hindustan from the north-west. Hindustani allowed speakers of Turkic, Arabic and Persian to communicate with native Indian speakers. In Delhi, the popular local language was Khadi Boli. Hindustani retained the grammar and structure of Khadi Boli but also absorbed a large number of Persian, Arabic and Turkic words for better cross-cultural communication. It is my conjecture that the word kabab first crept into Hindustani, then established itself over time into both Urdu and Hindi, eventually becoming fully absorbed into the Indian vocabulary.
4 comments:
Email ThisBlogThis!Share to TwitterShare to FacebookShare to Pinterest
Labels: Food 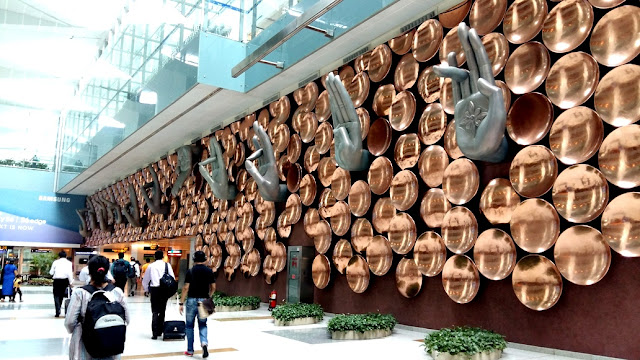 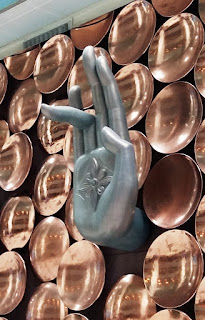 One of the major reasons why classical dances lose out to 'modern'  dance is the loss of this vocabulary. Over the years, the audiences no longer understand the gestures, and a vital link between performer and audience has been lost. A painstaking re-education is the only way to revive it. It's either that, or resign ourselves to losing these traditions.
5 comments:
Email ThisBlogThis!Share to TwitterShare to FacebookShare to Pinterest
Labels: Art, Delhi, New Delhi, Travel in India
Newer Posts Older Posts Home
Subscribe to: Posts (Atom)