If you go to Nizamuddin during the month of Ramzan, you will always spot the meswak sellers doing brisk business:


Meswak is a traditional way of cleaning teeth and is widely used among Muslims in India. It is sometimes spelt as miswak, and it's also called siwak.

Sales of meswak shoot up during Ramzan, because during fasting, you are not allowed to brush your teeth with toothpaste (as the fast will be considered broken). Meswak is "sunnah" (approved way of life), so you can use it to clean your mouth. Meswak triggers the flow of saliva. Swallowing this saliva is considered ok (whereas there are usually restrictions on swallowing saliva during fasting).
The meswak is a shrub / small tree. Its natural habitats in India are near mangroves, in saline lands, thorn shrubs, desert flood plains and along drainage lines in arid zones. It can tolerate lots of salinity.

The scientific name is Salvadora Persica; this fancy name was bestowed upon the tree by Dr. Laurent Garcin (1683-1751), a French naturalist working with the East India Company. In choosing the name "Salvadora" Dr. Garcin was honouring a 17th century apothecary from Spain, Juan Salvador i Bosca (1598-1681). The "Persica" refers to Persia, where the "true specimen" of the tree is said to be from.

Here is a photo of the plant in its natural settings, from Salem Al Shekaili's flickr page. Looks like a very uninspiring and ordinary shrub, doesn't it? But it is a valuable resource - the leaves are used as food (they have a mustardy flavour), the bark has medicinal properties, and it is being widely planted in Kutch as part of reforestation attempts.

In fact, to check to the versatile plants of the desert, you should head over to Salem Al Shekaili's really fabulous page to see his full collection of halophytes (plants which grow in saline environments).
2 comments:
Email ThisBlogThis!Share to TwitterShare to FacebookShare to Pinterest
Labels: Delhi, Festival, Nature, Nizamuddin

Of Papad and Urad

On a lazy afternoon, the papad-walla is very welcome in homes and shops in Old Delhi. Here he is, selling roasted urad-dal papads, sprinkled with masala. It's the perfect snack with hot chai.

Roasted papads are a very inexpensive snack (you can get 2 papads for just one rupee). They are very popular among families picnicking at India Gate in the evenings (although these days papad sellers are becoming a rare sight there). The secret of the papad's popularity is not just the low price, it's the spicy tangy masala that is sprinkled on it. You'll always see people asking for more masala :)

Among Delhi's poorer families, school-going children often eat roasted papad for breakfast, along with a cup of tea. A friend of mine, doing a PhD at Delhi, says that in one low-income community she surveyed, nearly 50% of the kids ate papad for breakfast. I was pretty shocked, really, and then I felt really stupid at my lack of knowledge of what poverty is really all about. What was I expecting? A fancy breakfast with fruit juice?

Papad doesn't really meet any nutritional needs, although since roasted papads are made of lentils, I suppose they are better than nothing. Typically, these papads are made of urad-dal (black gram), a lentil that is native to India. In fact, India is the world's largest producer (and consumer) of urad dal. Black gram accounts for more than 40 % of total legume seeds traded in the world, although I haven't seen it being used in any Western cuisines. Have you? I think it is used in central Asia and some Asian countries.
In India it is used not just for papads; but also as part of the daily diet, especially in South India, where it is a part of almost every breakfast (dosa, idli, vada).
In Delhi, other than papads, the most popular dish with urad dal is the famous Dal Makhani.
At the ITC Maurya, they have their signature Dal Bukhara:
The picture above is a collage of two separate photos - on the left is a typical meal at the Maurya's Bukhara, with tandoori roti, dal bukhara, kebabs etc. On the right is the menu of the special Presidential Platter that the restaurant created after Bill Clinton's visit. It is supposed to be for 2 people, but really, in my view, four people can eat what they serve. There is a vegetarian version of this platter as well, inspired by Chelsea Clinton.

There are several studies showing that urad-dal boosts the immune system. It is traditionally used in Ayurveda for several things, including as a face scrub, treatment for dandruff and acne, as a solution for low sperm count and erectile dysfunction in men, and for problems with menstruation. If you're interested in natural remedies, then see this link.

But if like me, your primary interest is in food, then look for a papad seller and try a roasted papad. And don't forget to ask for extra masala!
6 comments:
Email ThisBlogThis!Share to TwitterShare to FacebookShare to Pinterest
Labels: Delhi, Food, Old Delhi, People of Delhi

How to visit the Hill forts of Rajasthan, now on UNESCO World Heritage List

The forts range from the 7th century to the 16th century. Taken together, these rugged hill forts tell us about the political, cultural, social and architectural evolution of the ruling Rajput caste in the history of India.  Many are scenes of valour, and exemplify the Rajput belief in "death before dishonour".

These forts are built strategically on the Aravalli range, which is the oldest mountain range in India. According to UNESCO, they constitute "the most authentic, best conserved and most representative sites of Rajput military architecture".

Since there will likely be renewed interest in these forts, I thought I'd write something practical about where these forts are located, and how to get to them.

(1) Chittorgarh (Chittaurgah) - this fort is 2hrs to the north-east of Udaipur. If you are driving between Jaipur and Udaipur, you can visit this fort on the way, although it will make for a long day. The ideal way to visit it is as a day excursion from Udaipur. See more details here: http://udaipurmagic.net/excursion-chittorgarh.html

(2) Kumbhalgarh - it is 2.5hrs to the north of Udaipur. If you are driving between Udaipur and Jodhpur, you can visit this fort. Also, you can combine it with a visit to the temples at Ranakpur. You can do a day excursion from Udaipur, see details here: http://udaipurmagic.net/ranakpur-and-kumbhalgarh.html. You can also choose to spend the night at Kumbhalgarh, the Aodhi hotel is a very nice option. There's a sound and light show in the evenings.

(3) Gagron Fort - this fort is in Jhalawar, in the south eastern part of Rajasthan. Surrounded by the waters of the Ahu and Kali Sindh rivers on three sides, it is one of the finest examples of water forts. If you are driving between Udaipur and Jaipur, you can take a break at Bundi and visit Gagron as a day trip from Bundi. It is about 2.5hrs drive from Bundi.

(4) Ranthambhore Fort - located uniquely inside a tiger sanctuary, this fort is home to a popular Ganesha temple. It is accessible all days of the week and makes for a good visit combined with jungle safaris. Ranthambhore is 6hrs drive from Agra, and 4hrs from Jaipur (the nearest airport). More about my tiger sighting at Ranthambhore here. It is very popular with tourists, so expect crowds.

(5) Amber Fort - Most tours to India include a visit to Amber in Jaipur. In fact, Amber (also called Amer) is probably the most visited fort in Rajasthan, because it is part of the popular Golden Triangle circuit. There are elephant rides to the top of the fort. For how to visit Amer Fort, see this link: http://delhimagic.com/golden_tri.html 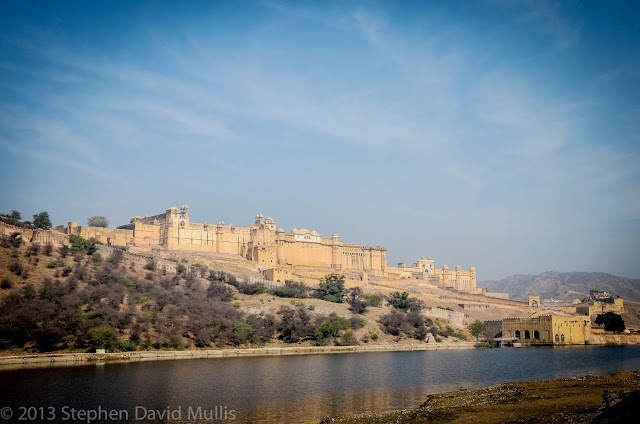 (6) Jaisalmer Fort - Jaisalmer Fort, or Sonar Qila, the Golden Fort - Its massive yellow sandstone walls are a tawny lion color during the day, fading to honey-gold as the sun sets. Jaisalmer is 6hrs drive from Jodhpur. At the moment there are no flights to Jaisalmer.

I created a map, showing where these forts are located. I'm sure you'll find it useful.

Each of the hill forts selected in this list is of "Outstanding Universal Value" with "advanced construction techniques exploiting natural terrain and contours for defense". They also have "unique social associations with Rajput courtly life". Many are the sites of ritual suicides, the Rajput mass-immolations called jauhar. The temples and palaces inside them are extraordinarily beautiful. These hill forts represent the most sophisticated and evolved examples of secular Hindu Rajput architecture, utilizing the wealth of natural resources and located in an extraordinary geographical setting.  .

I hope you will visit at least some of these forts this year. If you need help with planning the trip, please email me at deepa@delhimagic.com