The Secretariat Building and the people who really run the country!

I was driving towards the President's House compound, when I saw the North Block of the Secretariat decorated with the familiar colours of saffron, white and green. Against the blue sky, the building looked very nice! 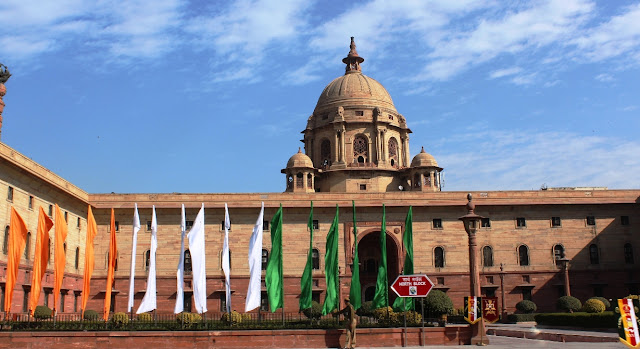 Every time I look at the Secretariat, I wonder what actually goes on in there. So this time I decided to read up a little.

.
The Secretariat is made up of twin buildings -  North Block and South Block (see photo below). The first thing I wanted to find out was why these two buildings are called the "Secretariat". It turns out that the folks in these buildings actually provide secretarial functions to the Cabinet. They convene meetings, circulate agendas and papers, record discussions, etc. The Cabinet Secretariat is the custodian of the papers of the Cabinet meetings (hey, *someone's* got to do the filing!).

But it's absolutely wrong to think of the Secretariat as a just bunch of paper-pushers. They provide Advice to the Ministers, and are responsible for inter-ministerial/inter-departmental co-ordination, as well as dispute resolution. Each of the two Secretariat buildings has 4 floors, and about 1000 rooms.  So now you can imagine what goes on inside - a lot of folks doing a lot of meetings and paperwork  and ego-management!

The numero uno of the Secretariat is the Cabinet Secretary, and he/she is also the head of the Civil Services. Lord Willingdon, who was Viceroy of India from 1931 to 1936, started the practice of having his Private Secretary by his side at his meetings. Later in 1935, it actually became a formal role.

Today the Cabinet Secretary is India's most powerful bureaucrat and the "right hand" man of the Prime Minister of India. The current Cabinet Secretary is Shri Ajit Seth, pictured below on the day he assumed office. He looks very calm and capable, doesn't he? I'm not surprised. 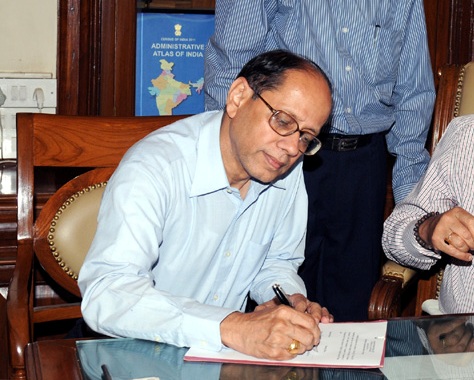 Kings and noblemen have always had administrators, capable guys who ran their kingdoms while they went off to war or to pay respects at some court or the other. The Chinese created the world's first meritocracy, with their famous 2500-year old Imperial Examinations system. They selected a group of intellectuals based solely on merit, who administered the country while the Emperors focused on political matters. 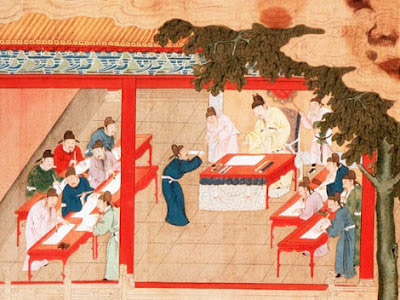 Closer home, many Indian Maharajahs had able scribes and administrators. The founder of the Walled City of Jaipur, Sawai Jai Singh (1688-1743) was ably assisted by his Diwan Vidyadhar. Sawai Jai Singh made it obligatory for his thakurs (nobles) to build their houses in the new walled city of Jaipur. But it was Vidyadhar who ran the show. He enforced the collection of 10% of the thakurs’ income to cover costs of building their houses. Vidyadhar also implemented several rules to ensure conformity in the design and execution of Jai Singh's planned city. As several documents of the time attest "Do as Vidyadhar says" used to be a routine part of the orders signed by Jai Singh. 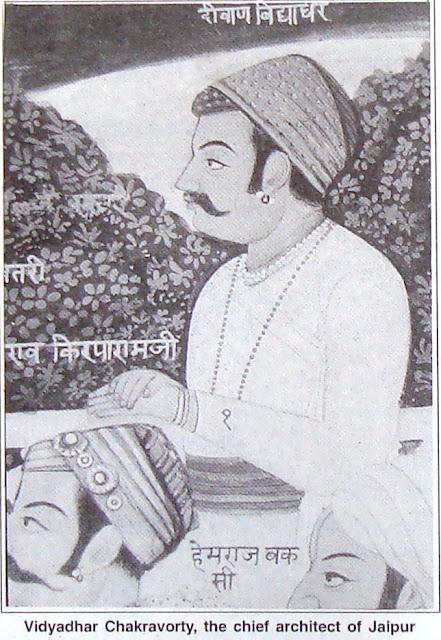 Under the East India Company, appointments to administrative posts were originally by "patronage". In other words, if you wanted to become a clerk or factor, you needed social contacts. A lot of younger sons who could not inherit estates in England tried building their fortunes around the world using this system of patronage.
.
But the East India Company was so impressed with the Chinese imperial examination system that in 1806 they established a college near London (Haileybury) to create a professional team of administrators. It was quite a departure from the norm! Pressure to create a merit-based system came from Thomas Taylor Meadows, who served as the Consul in Canton, China. He argued that "England will certainly lose every colony she possesses unless she adopts some system of impartial elevation of colonists to the posts and honours at the disposal of the crown".

Eventually an open competitive examination replaced the system of appointment by patronage. The original exams were confined to those branches of knowledge to which, in the words of Baron Macaulay, "it is desirable that English gentlemen should pay some attention". This included history, jurisprudence, finance, commerce and languages. Macaulay also suggested that a considerable number of the men selected should be those "who have taken the first degree in arts at Oxford or Cambridge".

And so it was that the "Oxbridge" men came to dominate the Indian civil services, a trend that strengthened after the Sepoy Mutiny of 1857, when the East India Company's rule ended and the crown took over.


The examination system is alive and kicking even today. This year over 200,000 people wrote the Indian civil service entrance exams, and finally 900 people were selected. The top two slots went to women, by the way. I took a look at the profiles of the top 25 candidates in the exams, just to figure out who the future bureaucrats of this country are. And I found a big mix of people from all walks of life: they include alumni from some premier educational institutions including AIIMS, IIM, IIT and the London School of Economics. They come from diverse family backgrounds - farmers, teachers, businessmen, army personnel, low and middle level government servants, doctors, advocates, professors and civil servants. 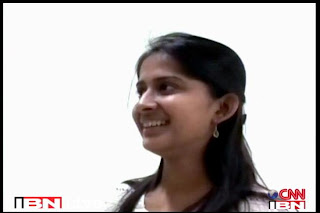 So these, then, are the people we will see inside the Secretariat in a couple of decades! In recent press interviews, they seem idealistic and willing to make a difference. Will they still be idealistic in 20 years, when they assume positions of significant influence?
Email ThisBlogThis!Share to TwitterShare to FacebookShare to Pinterest

Just one question: is "numero uno" a commonly used expression in English language? Because it's actually Spanish. I'm a Spanish girl studying English (your blogs has turned out to be of great help to learn new vocabulary in an amusing way)and this expression has got me a little taken aback.

This blog of yours, like the Mumbai Magic one, is really entertaining and didactic. In them you provide a very interesting approach to Indian culture. I'm enjoying them a lot! :)

Thanks Vieja, yes it is a Spanish expression but one that is commonly understood across the world.