The restaurants at Pandara Road have acquired a reputation for serving some of the best butter chicken in Delhi. It's the kind of Punjabi food that is viscerally satisfying - apart from the butter chicken, there are lots of rich creamy gravies, hot naans dripping with butter, soft paneer-saag, and other seasonal Punjabi specialties. 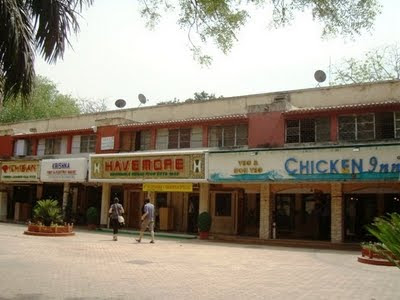 "Havemore" is right! This kind of Punjabi food is hard to resist! 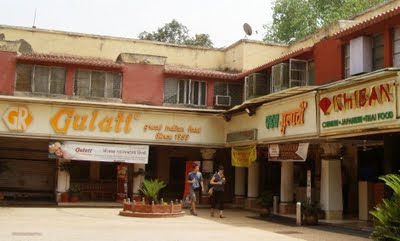 Gulati - another Pandara Road favourite.
I went to Pandara Road this week looking for an artery-clogging Punjabi meal :) But instead of the usual fare, I found a specialty menu on offer at Gulati's. 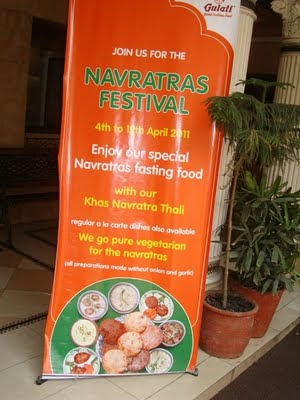 The Navrata Thali at Gulati
All over India, Vasant/Chaitra Navratri or Navratras is being celebrated; marking the advent of warmer weather. As part of this festival, a special fast is observed for 9 days. Rice and wheat are forbidden; in fact, all grains are forbidden. All meat and seafood is banned. According to religious prescription, only one meal a day is allowed; and simple healthy food such as fruits, vegetables, milk etc are to be had. Even onions and garlic and sea salt are forbidden. I guess the idea is not only to give the digestive system a break; but also to draw attention away from food, towards more spiritual thoughts.
However - like the Indian legal system - there are several loopholes in the scriptural injunctions, and these have been cleverly twisted to suit all those who have no desire to suffer :)
For example, those who can't live without hot rotis and puris have discovered that flour made of sago, buckwheat and water-chestnuts are all allowed. Why? Because these are not grains, you see? Water chestnut is a fruit; so is buckwheat (technically speaking!). And sago is made from tapioca. That makes these flour subsitutes perfectly acceptable during the Navratras "fasting". Similarly, since sea salt is forbidden; the meal is cooked with rock salt, lending it a different taste. Green chillies are a fruit, so they're kosher too. Chillies can therefore be merrily used to produce spicy results; spiritual thoughts be damned! :)
For every fasting "rule" there is a workaround, a sort of cheat code, if you will! It is as if a wicked, but highly determined chef decided that he or she would beat the system. Over the years, with help of several clever chefs and their clever workarounds, a complex cuisine has grown around the restrictions of the Navratras diet.
Since I have never fasted for Navratri, I was curious enough to want to try the Navratri thali. It turned out to be quite a fancy meal! 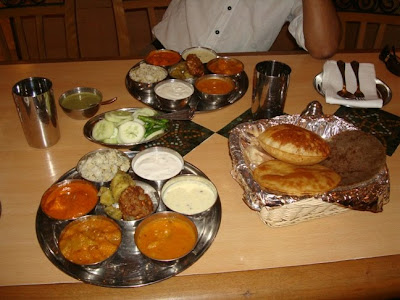 Thali with 8 different dishes, accompanied by water-chestnut (singhada) puri and buckwheat (kuttu) roti; and a cucumber salad.
At the centre of the thali is a bowl with two dishes served together, which serves as the starting point for the meal. The yellow-coloured stuff is aloo-chaat; the potato was lovely and tangy with rock salt. It was served cold, garnished with coriander. Next to it is a fried dumpling made of sago (sabudana), served piping hot. Nice combo! There's a spicy green chutney that you can eat with this.
The three orangey-red gravies were pretty good too - one of them is pumpkin, the other is paneer, and the third is a kind of dal that I couldn't quite figure out. All three were cooked without onions or garlic, but they were quite tasty.
Lastly, the three white bowls - they had:
a) sago kheer
b) sago pulao (flavoured with cumin and green chilli) and
c) yoghurt raita with rock salt.
I loved the raita, and the pulao was pretty good too. I tasted the kheer, it was light and nice, but I didn't have much of an appetite really. 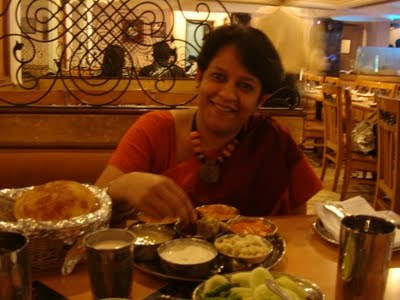 Buttermilk to finish off the meal
There was a glass of cold buttermilk, also seasoned with cumin and coriander, to round off the meal nicely. So instead of the kheer, I stuck to buttermilk.
For me, the most interesting part of this meal was discovering kuttu, or buckwheat. I had never seen buckwheat before. It is grown mostly in the hilly regions of North India. 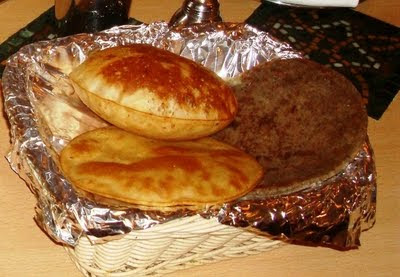 Buckwheat roti (the black coloured stuff)
The buckwheat fruit has a single seed, sitting inside a hard outer skull. The skull may be green or dark brown, which is what makes the kuttu roti blackish looking. The buckwheat roti tastes nothing like a wheat roti. It is kinda starchy, and it has been cooked with a lot of ghee, so it is heavy as well.
As we walked out of the restaurant, I wondered why or how this nine-day Navratri fast originated. In the month of Chaitra (April), the season changes. The hotter summer days begin. Maybe it originated as a way to get the body acclimatised to the weather change? If anyone knows the answer, or has a better guess, please let me know. Meanwhile, if you want to taste this thali, head to Pandara Road!
Email ThisBlogThis!Share to TwitterShare to FacebookShare to Pinterest
Labels: Food

That looks delicious! Thanks for sharing the wonderful pictures! A

And yes, buckwheat is really good - the only reason I know it is because here (in the US), Japanese food features it; you can find buckwheat noodles that are very tasty with a bit of soy sauce! :)

Nice article and very good description of the Navrathra Thali :) I have tasted Singara Puris - they are very yummy and go very well with aloo sabji. Aloo sabji with lot of cumin and dhaniya seeds taste great (even though it is devoid of onions)

I love this fasting feast. Bet you didn't have dinner. The kuttu roti must have been crisp and spicy.

Shobna it tasted like...kozhakattai maavu :) i.e. as non-crisp as it gets. No spice either.

I just discovered your blog and am loving it! So much delicious looking food in this post. :)

In America we use buckwheat to make pancakes (they're more nutritious than those made with white flour). They're filling and really tasty. I'd love to try a buckwheat roti!