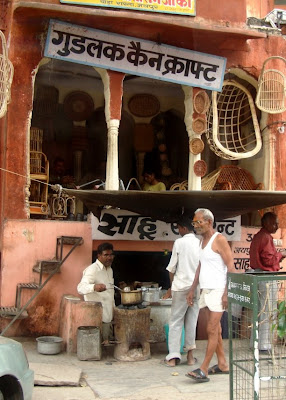 The best tea I had in Jaipur was at a little stall called Sahu Chai, on Chaura Rasta.
.
We had been walking for hours in the bazaars, and while it was fascinating, it was also very tiring. By 4:00 p.m., I was beginning to flag - so my friend Swati decided to take us to Sahu's, to perk us up.
It was literally a hole in the ground, a small shop sunken below street level. But Mr. Sahu was something of an artist. I watched him make our tea with a delicate hand, adding just the right amount of tea, spices, sugar and milk. He had an elaborate yet unhurried technique of stirring the tea as it brewed - perhaps he was watching over it for some secret sign?
Whatever the secret, the tea when it came was glorious - piping hot, milky sweet and flavoured with a mix of spices. It was served in a tall glass, and as I drank it, I felt the energy rush hit my bloodstream.
. 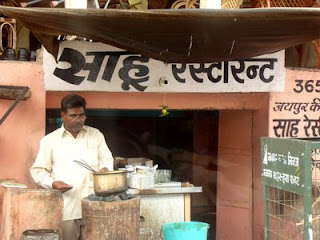 "Where would we be without tea?" I said to myself. I sent a silent thanks to the persistent Englishmen who first popularised tea in India. If it weren't for the dogged campaigns and door-to-door demonstrations of the Tea Association, Indians would have stuck to the traditional lassi, milk and water.
Of course, the English didn't quite bargain for how Indians would practically *reinvent* tea by adding cardamom, ginger, and even pepper to it! Nor did they realise we'd add the milk and the sugar alongside the water, boiling all of it merrily into a thick, aromatic cup. But as anyone who has tasted a good masala chai will tell you, there's nothing better on the planet!
Email ThisBlogThis!Share to TwitterShare to FacebookShare to Pinterest
Labels: Jaipur

yes, a cup of steaming hot tea made our Indian way brings comforts unmatched. And I must say here that I loathe the "chai tea lattes" that are served in US pretending to be Tea.

"chai tea" gets my nerves wrecking... just as "queso dip" and "carne asada steak" does ;)

But I agree. We were in India earlier this year and while in Jaipur, we got a bag with some masala chai that I've been carefully rationing... I don't want to run out, it is SOOOO good!!!! The only good thing we've found that is close to it is tea bags from a German organic brand... but it's just not the same.