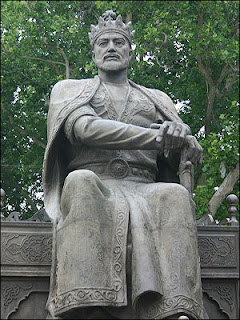 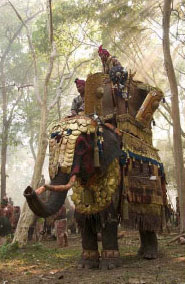 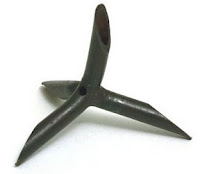 The elephants arrived in Samarkand, laden with gems, gold and booty. A grand mosque was built in thanksgiving. Since Timur was nomadic and lived in a tent, the elephants, painted red and green, became exotic and grand guardians of Timur's tents.
Email ThisBlogThis!Share to TwitterShare to FacebookShare to Pinterest

Historical figures we condemn as looters and vandals have used the wealth looted from India to erect monuments to their glory. Mahmud of Ghazni constructed buildings in his Capital which are still the pride of the locals there. At this point of time their postion in history appears to be dictated by the Geographical location of the guy passing judgement on them.

although, its truth that india could not stand in front of him and timur basically a very talented warrior who could put him under all conditions. see during his whole life time, he did not loose a war either cared his life in any war. the way he caputred delhi is not a way looters but brave man's war. he was not looter, if you see world history any person who got powr caputered up to his best. for example ashoke, alexander etc . every king wanted his kingdom expansion so were the desires of timur, he was a decent jack as he ruled with rules. you see, during war period , his diet was of ordinary soliders, he did not like luxurious life and had sworn not to stay more than three days in city.

India has a pathetic history of defeats, no wonder the people are so interested in mahabharat and ramayan for stories of glory since their medieval leaders were a failure.

Deppa,
I ran across this older blog entry of yours, and think it is beautifully written. I am working on a presentation that includes this topic. Do you still have your reference for this?
Thanks for sharing this.
Colleen

Colleen, it came from multiple sources, one of them I remember was Bamber Gascoigne's The Great Mughals, but I cannot remember the rest. Since I'm not writing a paper, I'm not burdened by the need to document and quote sources :) :) Ah, the happy freedoms of blog writers :)

Its a irony that we indians still do not comprehend the importance of great emperors like Chandragupta maurya and Ashoka maurya.
not a single movie befitting their stature and contribution. all we come across are the glamourised exaggerated versions of ramayana and mahabharat which mere epics but not historical events that really occured.

Thank you for your lovely blog, having visited your city some 20 years ago, I was fascinated by the history which is such an integral part of it. In many ways, the city and its people reminded me of my home country of England, and I don't mean the 'colonial bits', I think it's because we're both used to living in the midst of history and tradition, never changing, always in a state of flux.

I'm currently writing a book on Timur, working on the part relating to his Indian incursion, and oddly this is the third time today I've come back to your Delhi blog - the wonders of the internet. All I wanted to say about this particular entry is that most historians are of the opinion that the Mulfazat i Timuri is a (very clever) 17th Century forgery, so it probably shouldn't be relied upon as a reference.

Personally, I think the best primary reference for the course of the 1398 battle of Delhi is the second Zafarnama (the Timurid text by that name, not the Sikh one!). Interestingly that very detailed account mentions some of the preparations carried out by Timur's men to counter the elephants, which terrified them, but that they were not actually used in the ensuing battle. The tales of the camels bearing oil soaked reeds etc... seem to come from Ibn Arabshah, Clavijo and Schiltberger, none of whom were present at the battle and all of whom give rather far fetched seeming versions, especially Clavijo (who'd never seen elephants before he got to Timur's court - his description of one is interesting) and the impressionable Schiltberger, Ibn Arabshah even claims the elephants were scared of camels 'because there are none in India'!

Anyway, please keep up the great blogging on your fascinating and lovely home city which I one day hope to visit again, if I do I'd love to look up some of the lesser known antiquities you mention.

Battle of Haifa
Battle of pavankhind
1971 indo pak war
Battle of rezang la
Battle of Rajasthan
Battle of vasai
Battle of dewair
Mughal vs ahoms
And many more ...

@Mike, thanks for the corrections.