Hakim Chhottelal Shri Ram Jain, says the signboard of this medicine shop in faded red letters. And above that, it says Unani Vaidik. 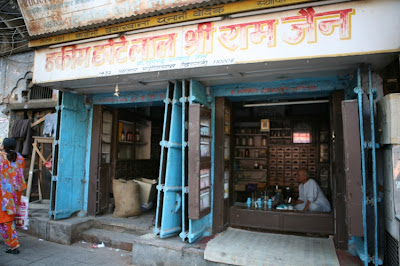 I stood there, bemused, looking at how this one little sign represented three of India's religions!
This is obviously a family of traditional Hindu healers (hey, why would he be called Shri Ram otherwise?), who at some point, converted to Jainism (therefore the 'Jain' surname). And then, sometime during Delhi's rule by Muslims, this family learnt Unani medicine, and reinvented themselves as Unani hakims, practising a medicine popular with Delhi's Muslims.

I wonder if they found it difficult to switch from Ayruveda to Unani. Probably not. Ayurveda and Unani aren't very far apart, they are both holistic medicines, which believe that the cure is within the body, and that a 'balance of the humours' is essential for well-being. But I'm sure this man's ancestor was a smart cookie. How else would he get access to this prime storefront, right outside Jama Masjid?

Next time I go to there, I'm going to speak to Chottelal Jain, and check out the family history. If you get there before me, come tell me about it. And here's a tip - Jain Sahib likes a bit of tea and gossip! 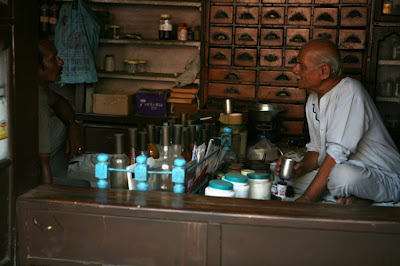 P.S. Do you know what's common between the Arabic word hakim, and the Sanskrit word vaid? Both mean learned or wise person! Vaid comes from the Sanskrit root word 'vid', meaning 'to know'. And the same root word exists in Latin (videre, to 'see'), from where we get the English word video.
Email ThisBlogThis!Share to TwitterShare to FacebookShare to Pinterest

This comment is not really apposite to this article, but I must say it would be really nice if somebody would do something like this on Hyderabad.

Why don't you do it, ragz? I promise I'll drop in and leave comments!

just a heads-up. i sent you an email in response to your comment. i wonder if you received it?

if not, drop me a message using the contact form on the About Us page of my blog.

Well to start with I am good at commenting about the work done by other people and extremely bad at doing something original myself. That apart, I would break down for material after a day or two.

But if at anytime you need material on Hyderabad you can always call on me.