There is some exquisite architecture in the Lodi Gardens. In fact, there is so much beauty that I don't know what to write about, and what to leave out. For example, this gorgeous doorway is just one of the unimportant side entrances of the Friday mosque at the Bara Gumbad complex.
The mosque was built by Nizam Khan Sikandar II (Sikander Lodi). He ruled between 1489-1517, and was a Pashtun Afghan. The Friday mosque is part of a complex of three buildings, two of which you can see in the photo below. The mosque is the building you see on the right, with the arched bays. The bigger building on the left is the Bara Gumbad. 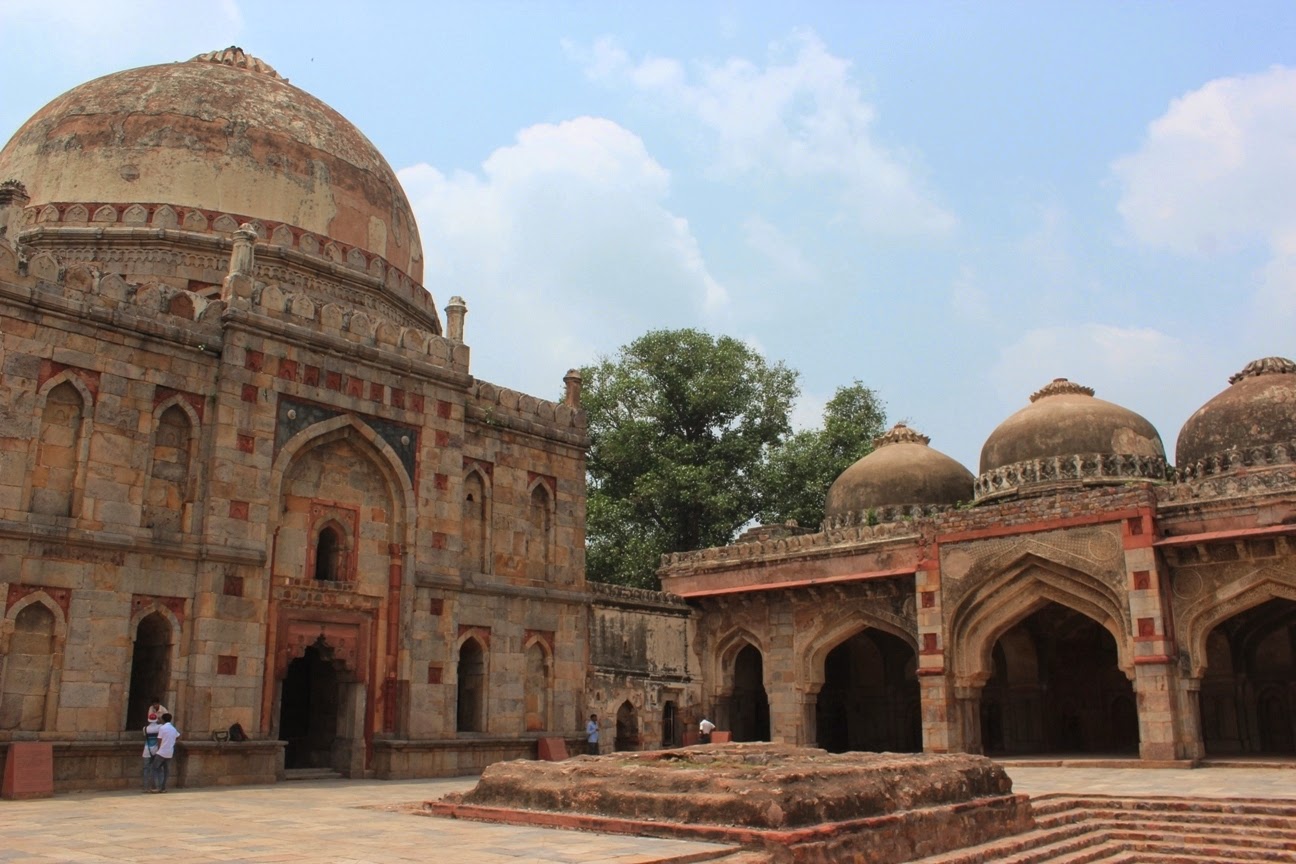 The arched entrances of the mosque are interesting, because of their proportion. The central ones are very wide, compared to their height. See the photo below; how wide the three arches are! By the time of the Lodis, the practice of putting three domes together in mosques was in place, and the sizes of the domes may have influenced the width of the arches. Or it could be, that the Lodis were modeling their work on the grand Great Arch of Bust, built by the Ghoris in Afghanistan in 1149. 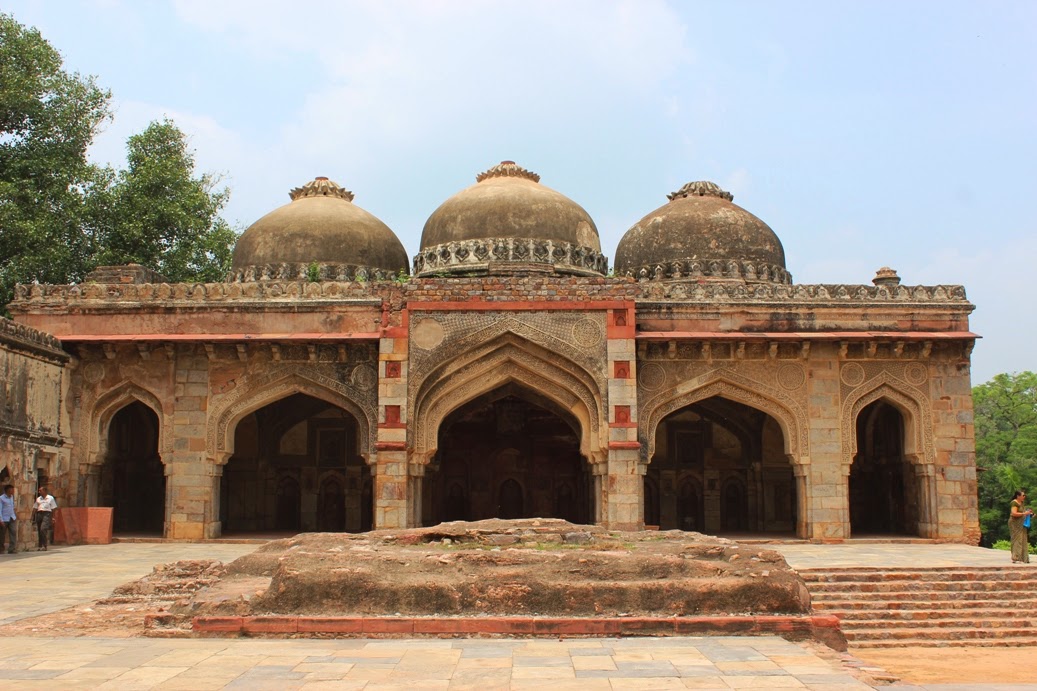 The mound of rubble which is in the foreground is believed to be a burial area. I don't understand what else such a large base could be, which is placed out in the open, and that too in the central path. Did someone want to be buried in the open, without a tomb over his head? Or was it some structural construction that they began and then abandoned? An architectural minar experiment gone wrong? Who knows?!

There are some unusual features in this Friday mosque of the Lodis. The most unusual one being the jharokha-window which you can see on the side of the mosque. The window was obviously needed for the flow of breeze in Delhi's hot summers. But this one has been given a local treatment, similar to those found in temples and homes of Northern and Western India. 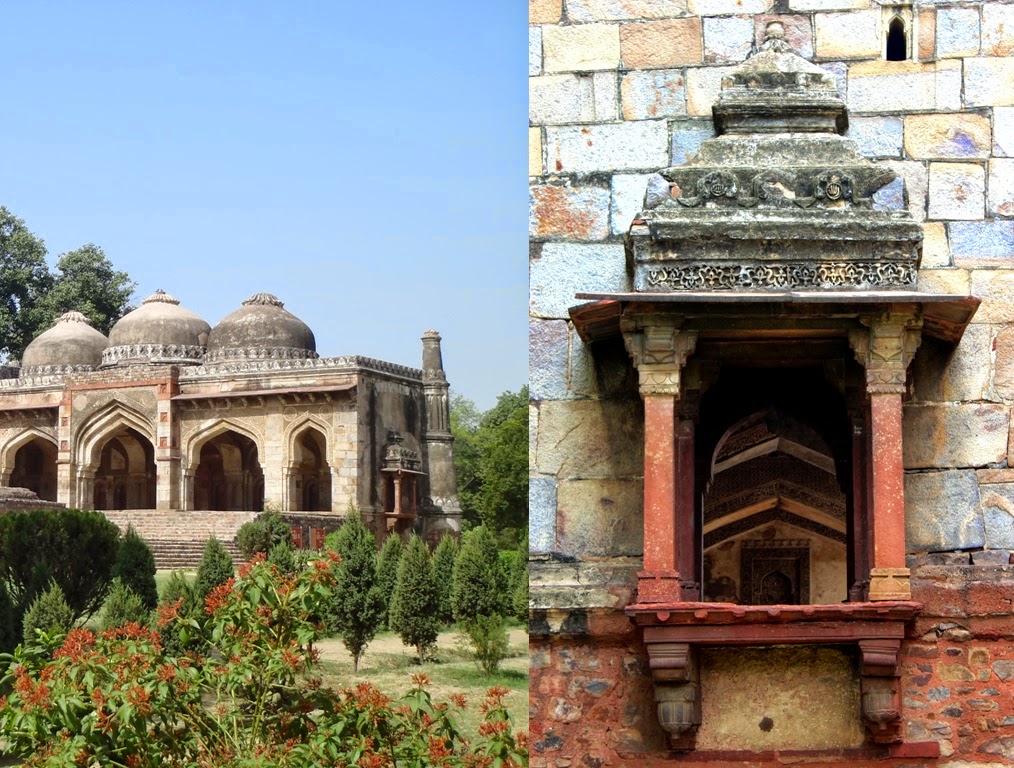 In the photo above you can also see a very stocky minaret. I suppose ever since the Qutb Minar (and the even older minaret at Jam in Afghanistan), every nobleman in Delhi wanted to build minarets. The Tughlaqs who preceded the Lodis also built several of these bulky minarets. To me it looks as if the one in Lodi mosque was planned to be taller, but then the idea abandoned later (see how the top segment narrows all of a sudden).

It's all these experiements - some successful and some not-so-successful - that endear Lodi architecture to me. As I said earlier, the Lodis are Pashtun Afghans. When we think about the Pashtuns, we have this image of a warring tribal people with no refinement. But Afghanistan has architectural remnants of all ages, including Greek and Buddhist stupas, grand minarets, grand arches, and they have superb stucco work with baked bricks and calligraphy; not to mention the amazing blue stonework. The Lodis brought these dreams to India. In this new land, where the Lodis ruled for 75 years - yes, that is a long time - they rendered the beauty of their homeland in whatever fashion they could.  Those of us who have walked in Delhi's Lodi Gardens can see the dreams of these men even today.
Email ThisBlogThis!Share to TwitterShare to FacebookShare to Pinterest
Labels: Delhi, History of Delhi

I would like to thank you for all the work of your many blog entries.

I live in Wales on the very west coast of Britain, windy and cold, just to see the colours of your beautiful city is warming.

I am studying the 1857 uprising, whether it is called the sepoy mutiny or the war of independence. This is purely for my own interest and to create models of the period.

Even with such a frivolous reason I still prefer to show respect to all those involved by trying to understand something of their viewpoint. I am trying to read modern Indian historians as well as the old Imperialist stories.

I came to your blog to look at pictures of the buildings, but I have gained much more than that.

I hope you will long continue to share your enthusiasm and insight.