A sleepy afternoon in Khirkee Village

Khirkee has been in the news recently, and it reminded me that I have not written about my visit there.

It was much before all this brouhaha happened.

I went to check out Khirkee some 4-5 years ago, while I was designing our Delhi - A Tale of 8 Cities tour. I was trying to showcase the many different settlements in Delhi, each from a different era, built by a different ruler, and with a different set of characteristics.

Khirkee is part of the very poetically named Jahanpanah (Shelter of the World), the 4th City of Delhi that Mohammed bin Tughlaq built in the 1300's. I wanted to add Khirkee to the Tale of 8 Cities tour because it shows how the city of Delhi is growing and literally sucking into itself, the villages that used to exist here. By the way, I am calling it the 4th city of Delhi, but depending on where you start the city numbering, it could be literally anything! :)

The major monument in the village is the Khirkee Masjid (Window Mosque). We wandered into the village, hunting for it, and were helped by local residents to find it. When I first saw the mosque, I was immediately struck by how robust it looked. There was no femininity or grace; instead I saw a strong building that looked more or less like a fort.

Khirki Masjid was built after the death of Mohammed bin Tughlaq, under the reign of his cousin Firoz Shah Tughlaq. Firoz Shah was the sort of ruler who trusted his wazirs and gave them a lot of wealth and independent authority. There were two important wazirs, a father-son jodi, who were responsible for many of Delhi's buildings in that era. Khirki Masjid was commissioned by the son, Khan-i-Jahan Junan Shah.

Although the mosque looked like a fort, when we wandered inside, we found these beautifully balanced pillars and arches, with a graceful strength that delighted me. 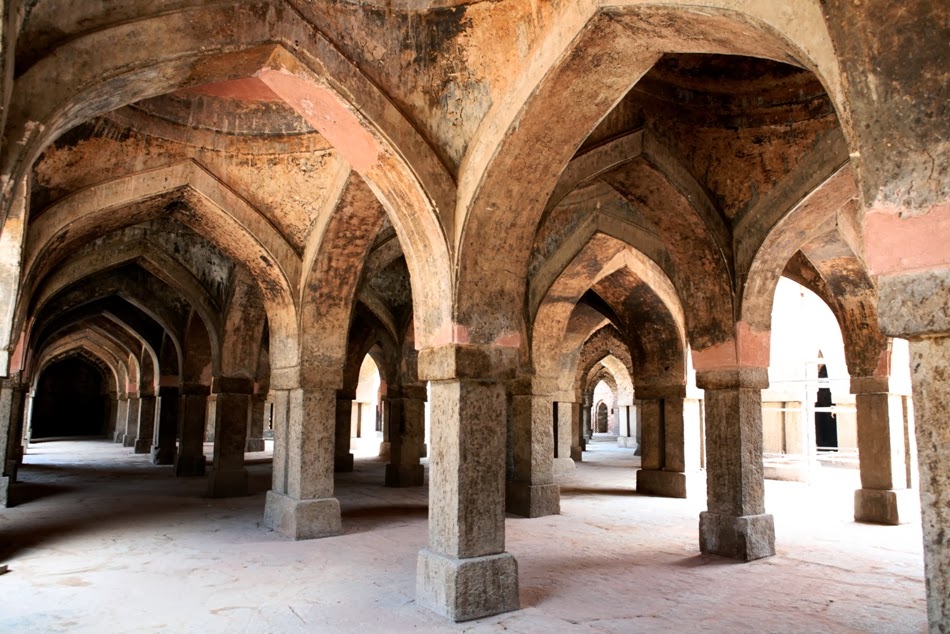 Khirki Masjid doesn't have a single large open courtyard for congregation. It is a square mosque, subdivided into quarters; and each quarter has its own inner courtyard. As you can see from the photo above, there are internal arcades which divide the mosque into aisles. These arcades are formed by 180 columns.

Here is one of the khirkis, the famous latticed windows that give the mosque and the area its name.


In the photo below, you can see the arched khirkis from the outside. The ASI has built a fence to prevent encroachment, and had dumped some rubble there; I think as part of their conservation effort (I saw scaffolding inside the monument, although it was deserted when we got there). Like many such settlements in Delhi, in Khirkee also, modern buildings as well as ramshackle structures are in evidence in the vicinity of the mosque. We debated climbing to one of these terraces to photograph the multiple domes of the mosque, but it was simply too much effort :) 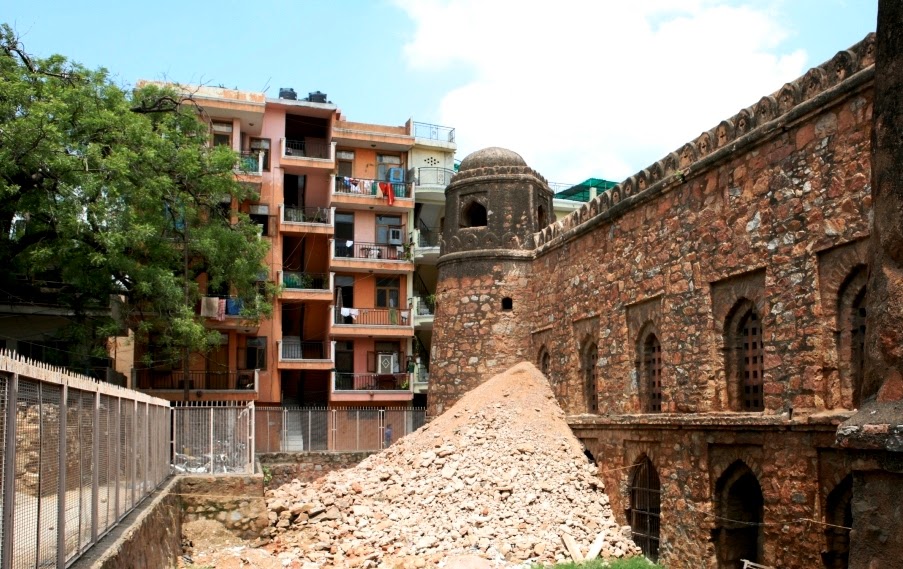 The area around the mosque still had lots of village-like features. This photo of a grandmother with her granddaughters could be from any of UP's villages. 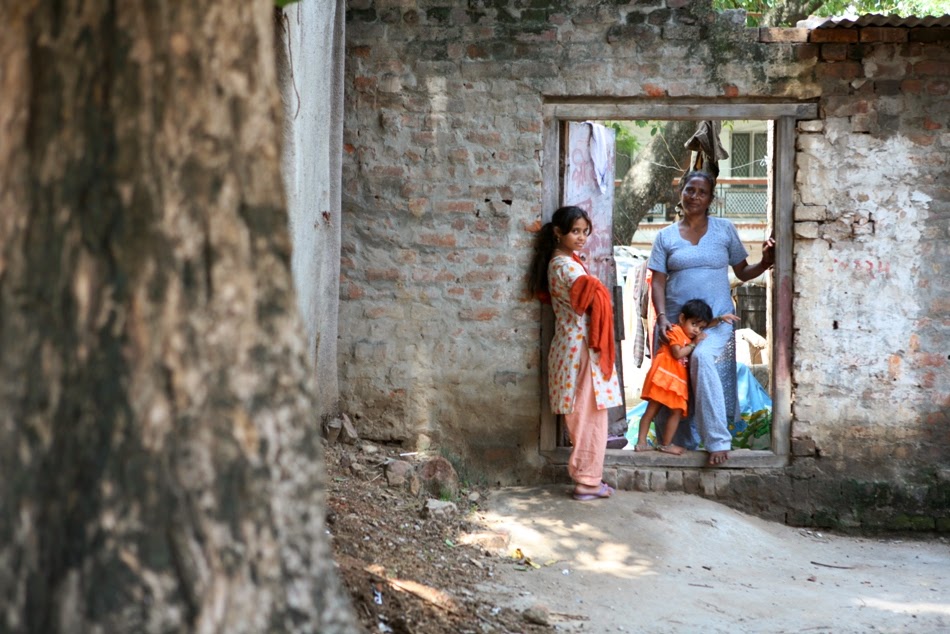 It was afternoon so people had finished their lunch and were in a relaxed mood. 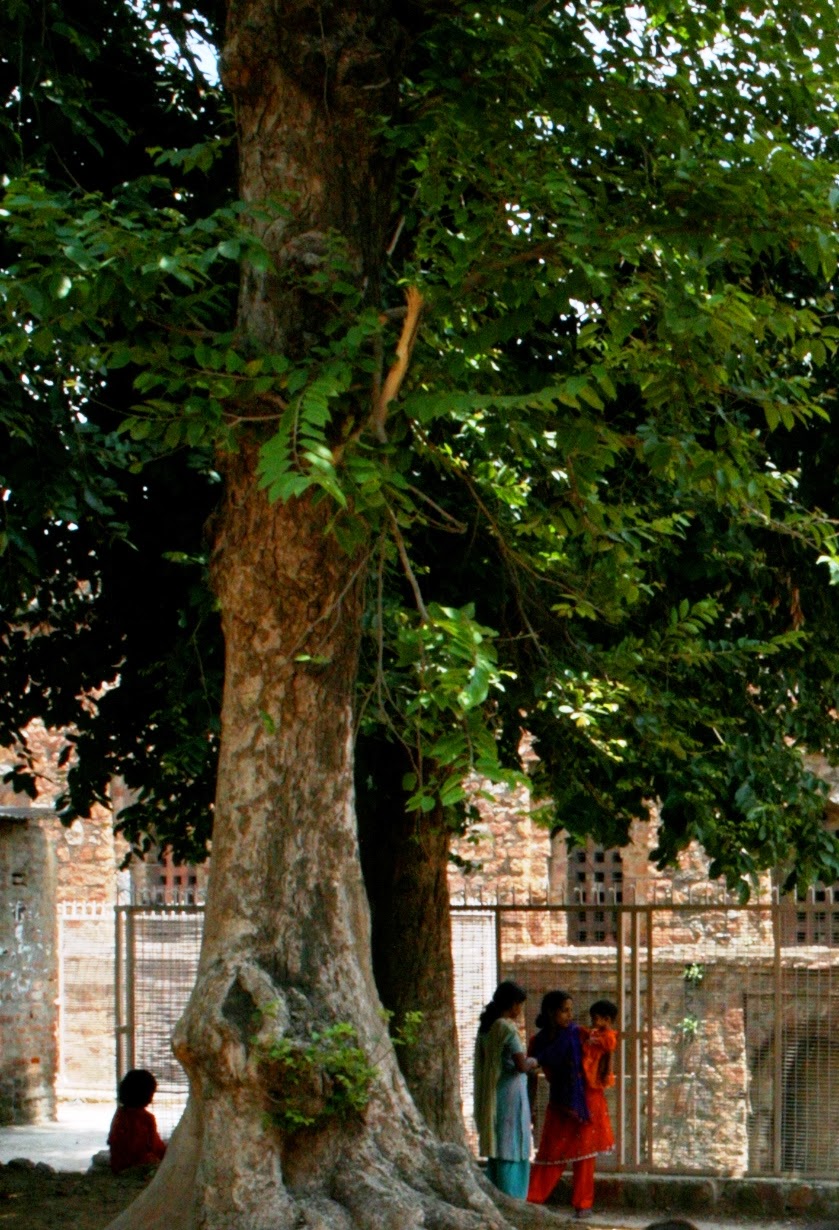 Shivji temple in a clearing, with a lingam nearby: Shivji was also relaxing, with no devotees hounding him for anything :) 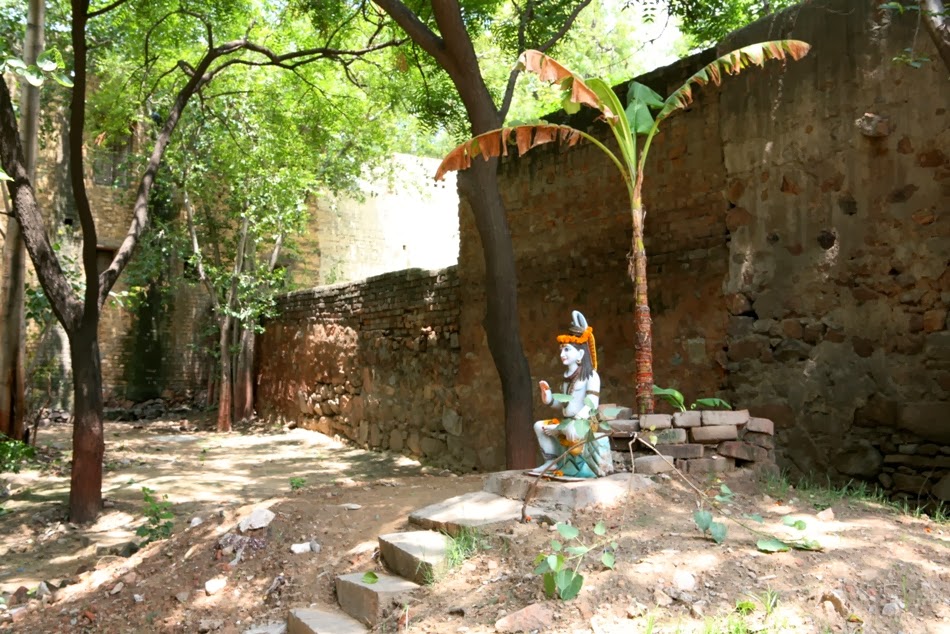 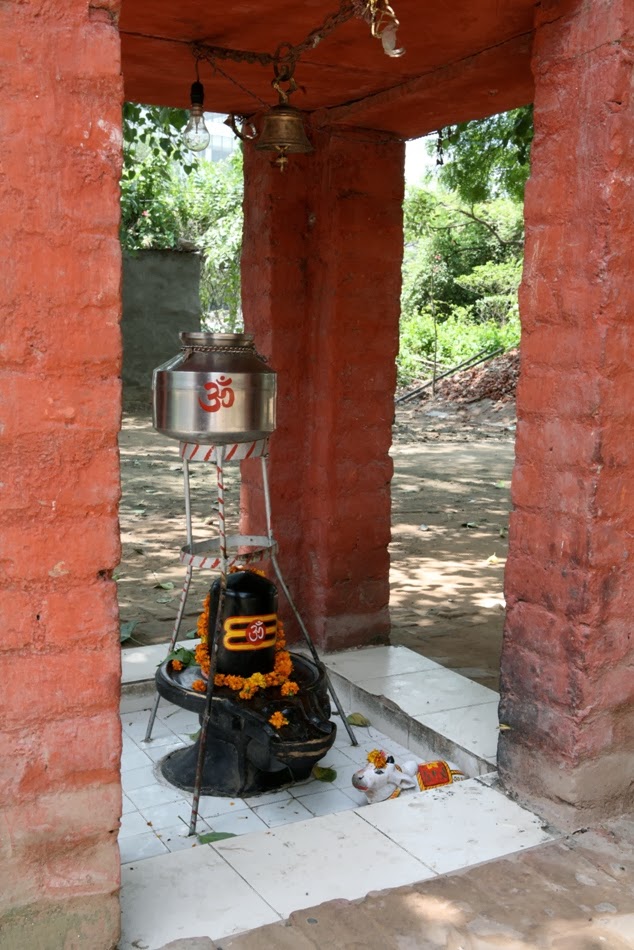 I saw a tabela (cowshed) with buffaloes, some inside, some outside: 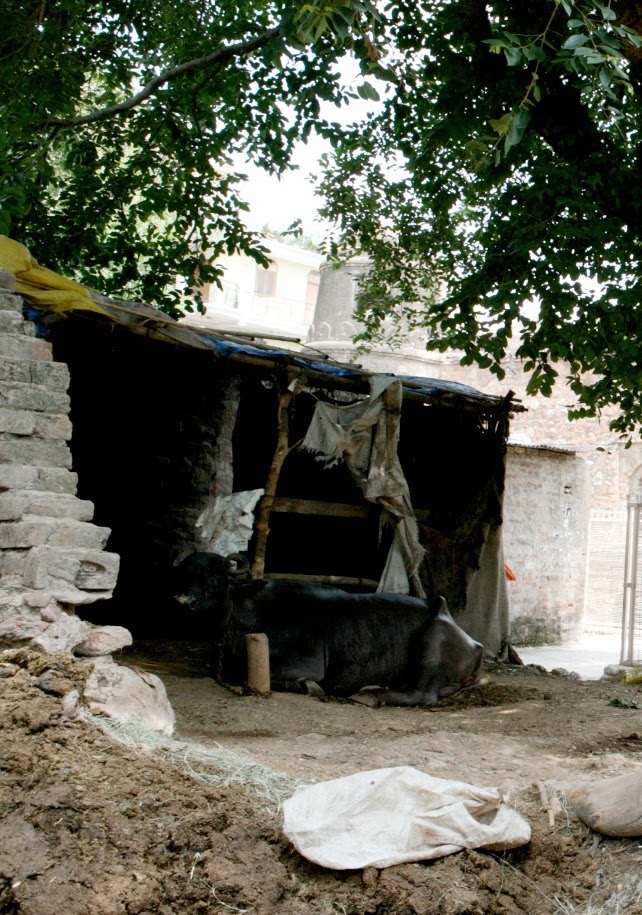 Back of the tabela, with cowdung patties drying in a heap. 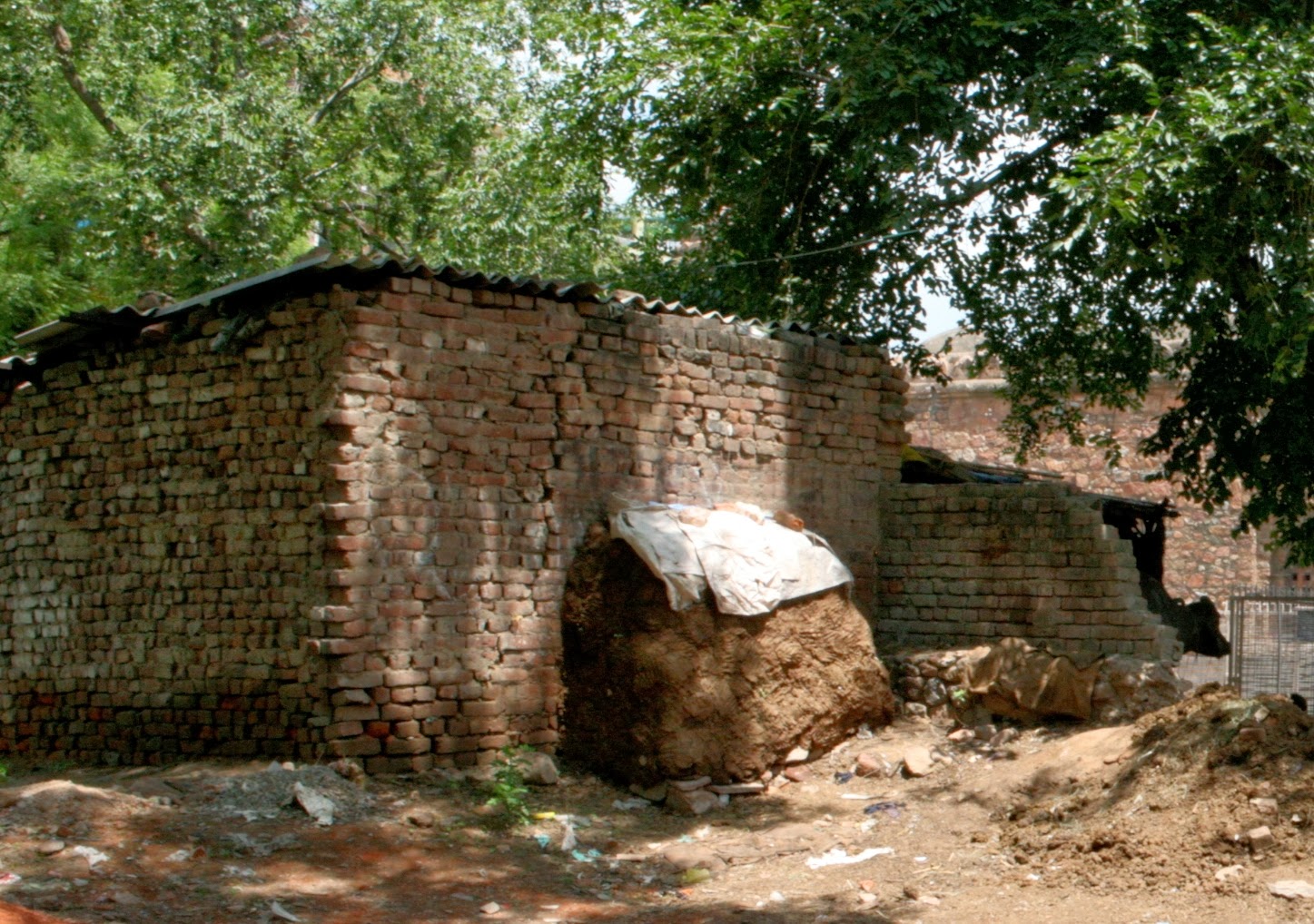 I want to go back and see if the Khirkee of my memory is the same or whether it has changed in the last 5 years. I have to wait for this current political mess to settle down, and for it to fade from people's memories. Then once again I can go in search of a sleepy afternoon in Khirkee... 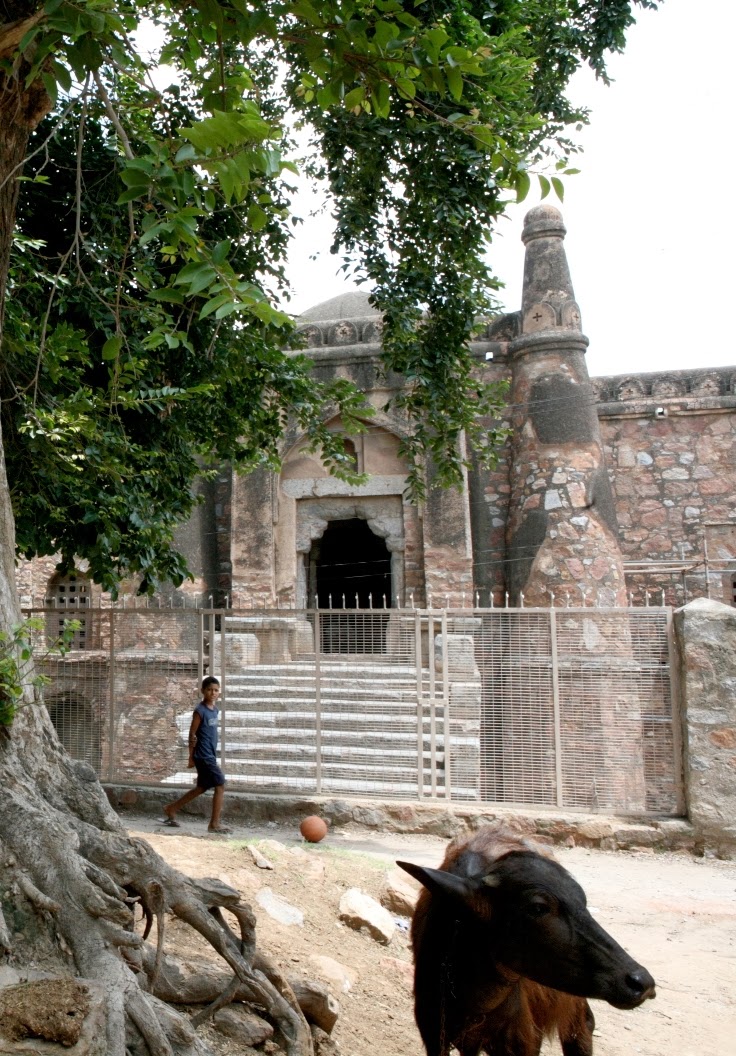 Email ThisBlogThis!Share to TwitterShare to FacebookShare to Pinterest
Labels: Delhi, History of Delhi, People of Delhi

Very interesting Deepa. If we ever go back to India (we would love to), we'll have your driver take us.

This blog is nice

Wonderful posts, Deepa :-)
Tomorrow I'm supposed to travel to Agra and was looking for some real-life experiences and Google sent me to your blog. So here comes another reader to your blog :-)

Though I blog myself and have written more than 800 posts but never wrote something out of my own life. Need to think about it.

Have a great day ahead!
Mousumi

I am so happy to read this blog deepa mam. I also started to write blog, but after saw your blog, I get new way to my blogging. Thanks a lot for making this beautiful blog.