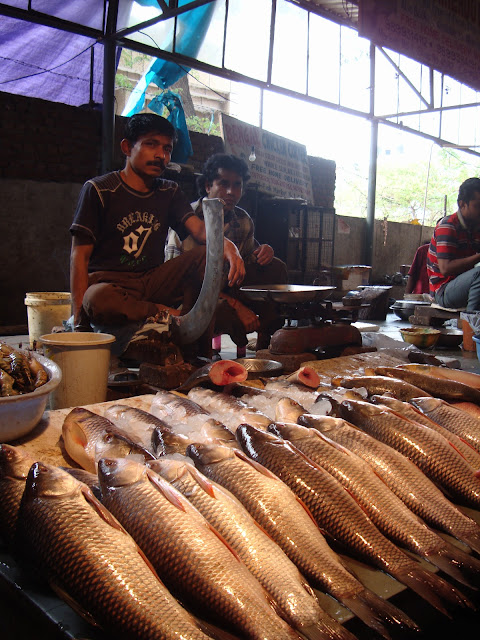 Hey Deepa - great blog! Thanks
Found the history of the Bongs' connection to Delhi particularly informative.
Although I live in CR Park and the places you mentioned are all familiar to me, I found your perspective on CR Park very refreshing.
Look forward to your next blog - keep it up

Great blog on March 24, Deepa! It's been a long time since I had red carrots: I see only the orange ones in our super market.
Mooli is acceptable in English, but its known as daikon, a winter radish.

Hey, I came across this post of yours seems quite from nowhere and I realized an error in your erudition saying that " The Bengalis came in a big wave in 1919 when the British shifted the capital from Calcutta to Delhi or if it maybe a typing one for which I am clueless " for the reason my study on the same says the year of the Coronation Durbar to be 1911 with which the intellect had to flow likewise.

Dear Sudipta, thanks for your comment. The foundation stone for the new imperial city was laid in 1911, yes, but nothing progressed, especially because of the outbreak of world war I. Only after the war the city began to be built and people started moving.

Dear Deepa,this is a great blog however you mentioned the population
only 2 lakh which wrong info.Please check the population.Because it cannot be 2 lakh if there is 450 registered and 200 unregistered durga puja in New delhi.The first Durga Puja held in 1842 by Majumder's of Rajshahi from east bengal.If there is so durga puja so population can be 20,00000 lakh not 2,00000 lakh.

Dear Deepa,you have mentioned 2 lakh
lakh Population .According to census
in 1971 0.5 million bengali arrived from East bengal that 5 lakh.Proper Settlement of Bengali in new delhi is last 200 years.First durga puja in 1842 by majumder's of rajshahi(east bengal).Large population came in before 1900.when capital shifted to New delhi huge population 1911,1947,1971.So how come it possible population is 2 lakh.It can be 20 lakh not 2 lakh.Please reserch and update

It is as per the 2011 census:
http://censusindia.gov.in/Census_Data_2001/Census_Data_Online/Language/parta.htm

Dear Deepa,
In that link it says 2001 census not 2011 census....and other language population is also not correct updated....it seems like an unresearched page link

Yes you are correct, it is 2001. But I looked up 2011 also, and the population of Delhi in the central areas (where typically Bengalis stay) has actually decreased. There is overall 20% increase in outlying areas, but I don't think we can assume that means 20% growth in Bengali-speaking population. Therefore I still prefer to go with 200,000 figure which comes from the http://www.censusindia.gov.in/ website.

Precise, sweet and profound narration. Very thoughtful profiling of Bengali community. Compliments first! And next, would you be eager to accommodate further input in relevance?

"Remember that Bengali households still are known for their amazing food culture and this fact is known world-wide :)

tanSEN was bengali my dear friend, so were a lot of other people! want to see the entire list as it stands today? so was subash chandra bose and sri aurobindo :)

and i can name a million others and i am proud to say our greateness can be exerted beyond our national borders.
we are the fifth largest speakers!

these guys are not just making India proud but half the world knows about these guys dude :)
c’mon
we bengalis have won pretty much every award in the world stage
you name it we have it and we are damn proud of what we have :)

its the only country in the world which took rebellion because it couldn’t speak its mother tongue and it won! and won so hard that the UN had to adopt that day as the international language day, which celebrates languages from all over the world.

did you know that the FAMOUS SEARS TOWER is architectured by another bengali?"

Very interesting write-up. You mention that the Grand Trunk road as it was later named initially began at Tamlok. Could you tell me the source of this information? Thanks.

The reference is below:

Book: Scroll Paintings of Bengal: Art in the Village By Amitabh Sengupta
Chapter 3: Historical Background of Bengal
It says under Guptas (320-480 AD) Bengal was connected from Tamralpiti (Tamluk region) to Hindukush. Tamluk had sea links to Sri Lanka and Myanmar also. Chandragupta (375 - 415 AD) had defeated the Vanga kings, making Bengal into a part of Gupta empire.
http://books.google.co.in/books?id=Jiqph80aDMwC&source=gbs_navlinks_s

Many thanks, Deepa. That was a very useful reference.

The post missed a point that a large number of bengali settled in dELHI DURING 1971 INDO PAK WAR WHEN BANGLA DESH GOT INDEPENDENCE.

Good point Sadhak Mandal, even though it's out of Deepa's post's context.

... A large number of Bengalis left Bengal during those trying times, some 80% leaving South Asia.

If you were one of those emigres who fled S. Asia then, I wonder how you have promoted the obvious achievements of Bengali culture. Please elucidate for my benefit.

One gets no insights into the Bengal connection with Delhi prior to 1919. Can you throw some light on this aspect please