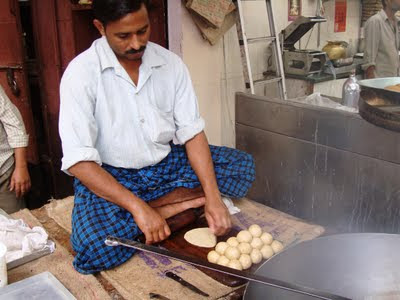 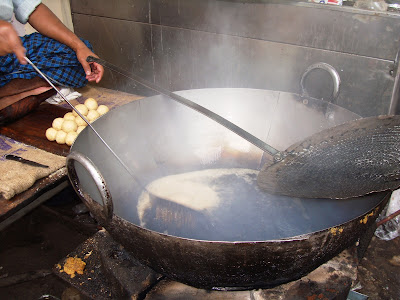 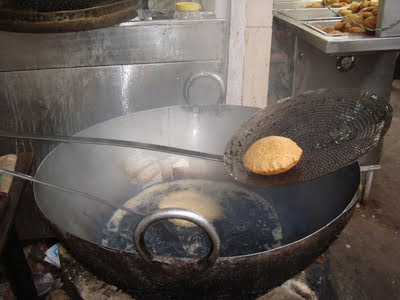 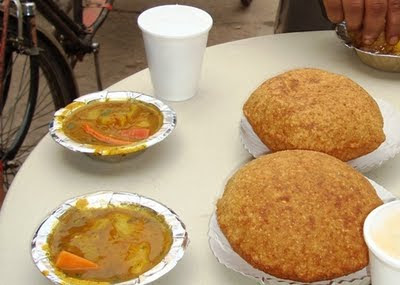 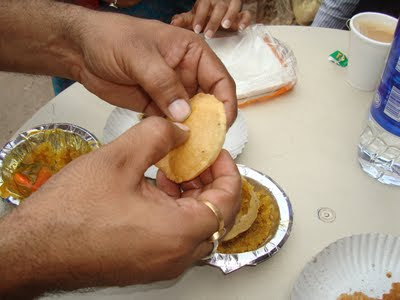 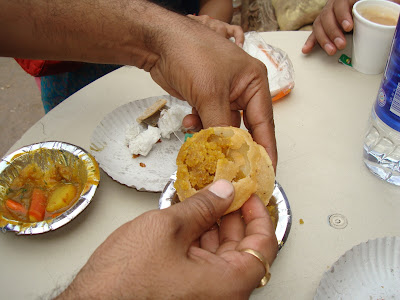 Sweet halwa in the nagori
If you want, you can also mix the two tastes, sweet and savoury, by sstuffing with halwa and dipping the nagori into the aloo sabzi as well (not my thing!).
We ended the morning with sweet refreshing tea. I left Old Delhi in a happy state - great food, good company, and to top it all, I clicked lots of interesting photos (material for several more posts, thank you Dhruv!).
Email ThisBlogThis!Share to TwitterShare to FacebookShare to Pinterest
Labels: Food, Old Delhi, People of Delhi

as usual very intersting. i think i will try the spicy poori. thanks. can u do a visit on a kumbakonam degree coffee and mylaopre elai vadams..[ if you really need elai vadams, my marathi maid does a great job now). arvind rangarajan tca

I stumbled onto your blog recently and really enjoy your posts. This one was especially tasty!

Puri! how do I love thee? let me count the ways...delicious blog! Old Delhi for breakfast next sunday

I love the food in the walled city. it's totally unhealthy but yum and irresistible. One thing I love about Delhi is it's no pretension food.

Yumm Yumm Yummy!!!! You write very well. If you are interested in reviewed ur fav eat-outs, jus see this link http://www.spiritzandmore.com/outlet-reviews

P.S they are givin away prizes too... I won a Fasttrack watch!

Delicious Delhi. I recently had the little puri with halwa in Purani Dilli and didn't know what it was called. What a yummy post this is.

Superbly written and well clicked pictures. The poori at chawri bazar seems worth a try. I bet the breakfast joints in Delhi also serve some delicious and nutritious breakfast. Thanks for the wonderful treat

I especially am grateful for the directions you give for each location (although your own Google Map, with all these locations marked out wouldn’t be half bad!)
restaurant in rajouri garden & best restaurants in ncr

Bring back old memories of old Delhi when i was used to live there.