The Indian Water Buffalo - A Tale from my childhood

When I was 10 years old, I read an amusing Marathi folk tale. It was about a man who left his home in a huff after a quarrel with his wife. When evening came, he regretted his rash action, but couldn't bring himself to go back and say sorry. Besides, too many of his neighbours had seen him walk off swearing never to return. He would become a laughing-stock if he returned meekly.
But he badly wanted to go back home for dinner, especially since his empty stomach now reminded him of his wife's lovely cooking. Desperate, he looked around, and spotted one of their buffaloes returning home unescorted after the day's grazing.
So he grabbed the buffalo's tail and went back home behind it, pretending the buffalo was dragging him back against his wish.
As he went, he sang a rhyme loudly: "Aga Aga Mahshi, Mala Kuthe Nehshi?!" (Oh, Oh, my buffalo, where are you dragging me?!).
He sang loud enough for the neighbours to hear :) When he reached home, his wife, wise woman that she was, smiled to herself at the hilarious sight, but welcomed him and gave him dinner. And that was the end of their fight.
Even today, every time I see a buffalo, this story brings a grin to my face. 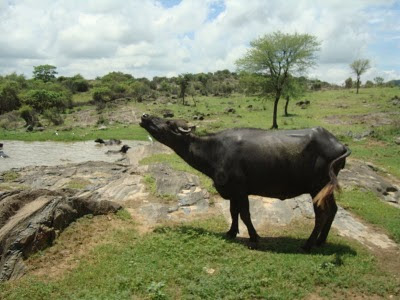 Aga Aga Mahshi, Mala Kuthe Nehshi!
Buffaloes are a big deal in India. I was looking at the National Dairy Board figures, and we seem to have an astounding 100 million buffaloes. That's one buffalo for every 10 Indians!
We have a lot of cows as well; in fact the cattle population is nearly double that of buffaloes. But the buffalo population has been growing far faster.
While buffalo numbers have grown by 130% in the last 50 years, cattle population has grown by only 15-20%. The trend is sharper in more recent years. Clearly, buffaloes are fast becoming the animal of choice in the Indian dairy industry.
Why is this happening? Simple. The buffalo offers the most reward for the least cost and effort.
Firstly, the buffalo is hardier, and survives better under poor fodder and poor management conditions. 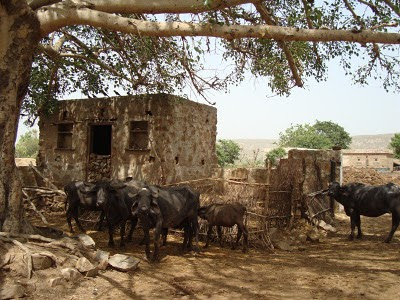 Skinny buffaloes in a dry village near Dausa, Rajasthan.
In this village home that I visited, there was no feedstock anywhere in sight; and grass was scarce. The buffaloes were skinny, and some had skin infections, but they still yielded milk. These buffaloes were still the biggest source of that family's income, and I'm guessing they made a big contribution to the family nutrition levels.
A buffalo yields richer milk than a cow (typically, buffalo milk has twice the amount of butterfat than cow's milk). The milk therefore fetches better prices. Buffalo milk is whiter, and better suited for the manufacture of milk powder. Traditional paneer cheese made from buffalo milk is better. Buffaloes can be used in agriculture for tilling, and also as a source of meat.
With the start of Operation Flood in the 1970's (specially the second phase of the program in the 80's), there has also been infrastructural support from the Indian government for buffaloes. Feedstock availability has been improved, veterinary services made available, and, most important, a stable, self-sustaining distribution channel has been established for buffalo milk. Both cows and buffaloes form part of the staggering 73,000 village co-operatives that produce milk for sale; supplying over 300 towns and cities. Each co-operative is made up of multiple small producers, allowing rural as well as semi-rural families (like the one below) to prosper. 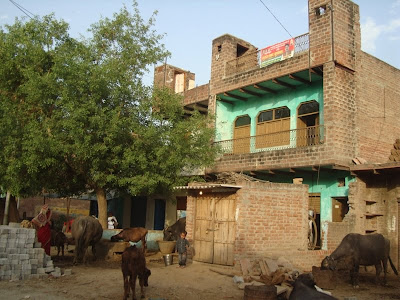 This family near Agra had four fat female buffaloes with three calves.
The children of this family looked well-fed and healthy. Obviously, the milk was for sale, and not just personal consumption. I could not stop and check if the milk was being sold to a co-operative. But since this home is not far from Delhi, I assumed the milk would probably end up there.
There are several breeds of buffalo in India; but the champion milk producer is the Murrah. You'll see the Murrah in Delhi, because it is native to Haryana (adjacent to Delhi). It's really easy to identify this champion - the horns are small, upwards, backwards and tightly curved inward at the end. 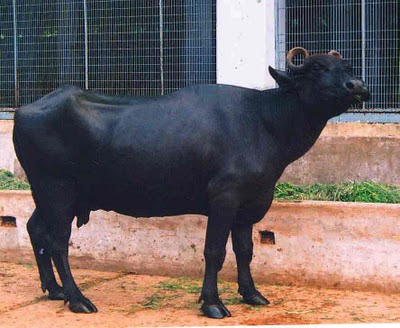 Haryanvi Milk Goddess :)
The tail of the Murrah often has a white switch at the end; and that's an easy identifier too (although you can't see it in this photo). There's a very nice page here, managed by Central Institute for Research on Buffaloes, that describes all the buffalo breeds in different parts of India. As you can see, they're each quite different; and some of them look very fancy! I'm going to click buffalo photos now, whenever I travel through the country!
All this milk-talk has suddenly set up a craving in me for paneer. Thick, creamy, soft, paneer... I'm thinking we'll try palak-paneer tonight! You're invited :)
Email ThisBlogThis!Share to TwitterShare to FacebookShare to Pinterest

I fell in love with the water buffalo and took lots of pictures of them when we were there... cows too but for some reason, the buffalo really piqued my interest.

Very Interesting and informative, I am actually amazed to learn we have that many buffaloes in the country.

Pretty nice post. I just stumbled upon your blog and wanted to say that I have really enjoyed browsing your blog posts. In any case I’ll be subscribing to your feed and I hope you write again soon!.

Can some of that palak-paneer be shipped to Michigan???? :) I LOVE reading your blog and can't wait to go back to India to see some of the water buffaloes! We saw a lot of them in Agra!

Nice and very informative post :) I love your blog completely .. there is always lots I gain from it. While studying in Pilani, I too have seen many rear buffaloes in Jhajjar, Bhiwani, Rohtak .. they are very hardy and I must say I had very delicious hostel food - thanks to many buffaloes :) - creamy milk, set curd, nice paneer.
I think I can smell the palak paneer you have made ;)