Let there be light

Living in a city, I take electricity for granted. City roads are brightly lit at night, restaurants are packed with smiling diners, traffic moves busily, and headlights cast shining beams everywhere.
I don't think about "light".

But last month, I spent a night at a desert "dhaani" - a small hamlet, with no electricity. When the sun went down, I realised I was in a completely different world. 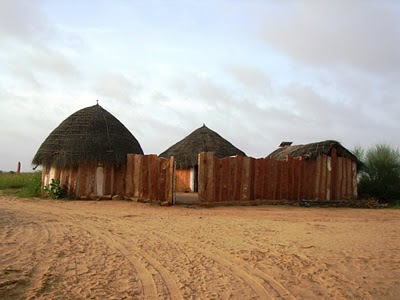 See the small solar panel sticking out at the top? It provides just enough to power his cell phones and computer, and to charge the batteries of his 3-4 lanterns. His neighbours are simpler folks, but Gemar - who runs a travel company and a homestay - has learned to harness technology. Unfortunately, the solar panels aren't powerful enough to provide more light than the small lanterns. 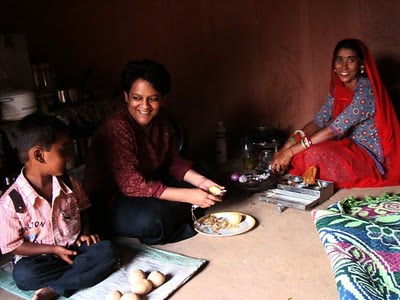 We got to the dhaani by 4:00 p.m. After tea, we began preparations for dinner while there was still daylight. We cooked using water frugally - I think we must have used about two litres of water in all, including washing vegetables, cleaning the utensils before cooking, etc.
Spending just an hour with a family in the desert teaches you the value of water like nothing else can. My daughter's school keeps running campaigns to teach schoolchildren to turn off taps at home...but really, what every city dweller needs is to go spend a night in the desert. You'll come back changed.

In Gemar's dhaani, there are no government-laid pipes that bring water. Instead, he arranges for water to be brought on camel carts whenever supplies run low. The water is free, but he pays for it to be transported. Gemar stores the water in a covered underground tank that he has built. Why underground? To prevent evaporation, of course. 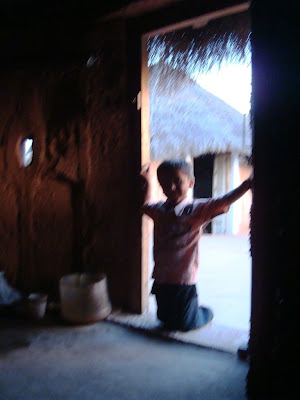 As we cooked, the light started to fade.
Rawal Singh, Gemar's little boy (who was also Commander-in-Chief of Potatoes!), ran in and out of the kitchen all through the evening. At the door to the kitchen, you can see the slop pail. Water that we used to wash vegetables and dishes was poured into the pail. Later, this water is not wasted, but is given to livestock, or used to water plants. 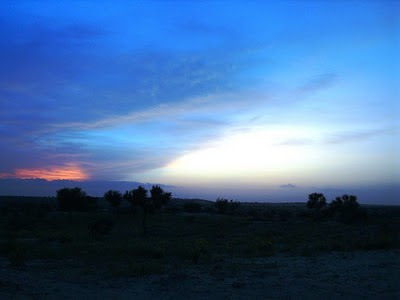 Glorious sunset
With the last bits of light going, darkness descended inside our little cooking hut. Meanwhile, we had reached the final stage, the making of rotis. For this part, we switched from the gas stove to a traditional firewood oven. 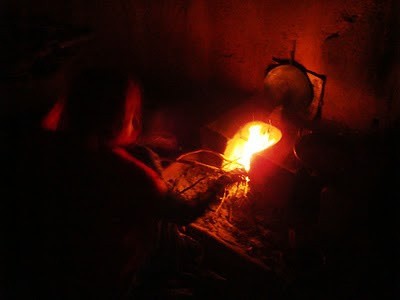 Cooking on a traditional firewood "choolha"

The choolha was lit with firewood collected from the surrounding countryside. One large piece of wood provided the basic heat, while smaller sticks were fed from time to time to raise the heat whenever the flames went low. Firewood cooking produces fantastic food, but it also creates a lot of heat and smoke. Much has been written about the potential health fallouts of long exposure to wood smoke inside kitchens. 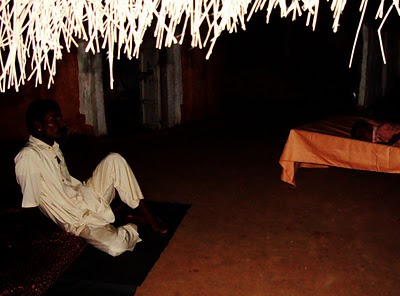 Gemar Singh sitting in the courtyard outside the kitchen.
By this time, it had become really dark both outside and inside; and I could no longer photograph anything without the flash on my camera. We ate in the courtyard under the moon, a simple, delicious meal, made all the more tasty because I had participated and watched the cooking. Later, Gemar brought out the desserts - the goodies he bought from Jodhpur - and we ended the meal with sweet memories.

And then it was time to sleep - the day ends early when there is no electricity! No television, laptops, no other distracting gadgets - so my husband and I just admired the stars, sent up thanks for the lovely cool breeze, and went to bed. 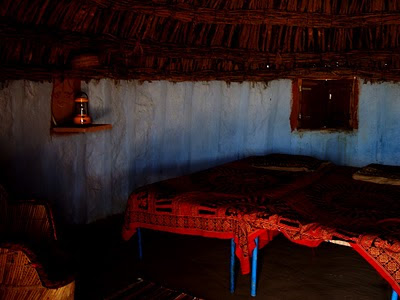 Little yellow lantern in our hut. Life-saver in the dark!
When morning came, I pushed open the door and stepped out into the daylight. I actually smiled when I saw the sun, and said to my husband, hey, daylight's here, let's make the most of it! And we set off early to see the nearby sand dunes. I tell you, I won't take light for granted any time soon :) 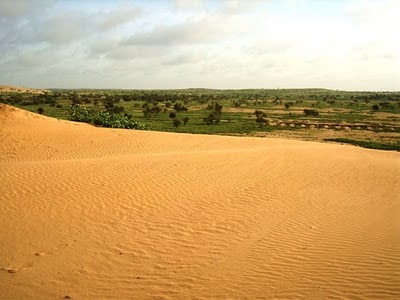 If you would like to visit this part of Rajasthan, and stay with Gemar Singh, please let me know. He runs a sustainable tourism initiative that supports local communities, and it is a great way to understand desert life. He's roped in a local team of cameleers, and they also organise camping. You can choose to stay in a hut like we did (I slept outside the hut for part of the night, under the stars), or camp out in a tent at the nearby dunes.
Email ThisBlogThis!Share to TwitterShare to FacebookShare to Pinterest

SO cool!!! Thanks for sharing this!

This is such a simple yet effective way to see how we take so many things for granted - light, water and so much more.

See Delhi like you’ve never seen Delhi before! Join us at PURANA QILA, THE OLDEST FORT OF DELHI, on 18th September 2010, to watch 100 percussionists perform together to Stand Up against Poverty. Passes are FREE. Fan http://www.facebook.com/unmcampaignINDIA for more details.

Wish I had been there :(

......reminds me of my childhood when we used to go to our native place and things were done with the small kerosene wick lamp.

I think the best part would have been lying there under the sky gazing at the stars.
Yes do send me the details as I intend to make a visit.

Great article and am sure even greater experience. I graduated from BITS, Pilani and learnt the value of water, almost respected it in the course of 5 years. Will love to take contact details from you of Gemar when a trip is on cards. Thanks for the lovely post.

I love all your stories here and everything being told here have excite me even more to visit amazing India and guess what, I'll be there next year. I cant wait and hope to be part of the wonderful cultures and meet all the lovely people..