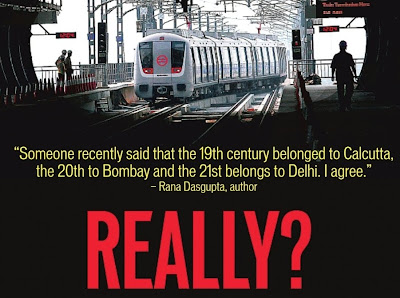 Bombay, which looked like the Golden City of the 20th century, now appears to be on a downward slide. The closure of the mills in the 1980's, the 1992 Hindu-Muslim riots, the current anti-migrant policy of the Sena brigade, the slums, the traffic woes...these seem to suggest that the city is becoming cancerous.
Delhi, on the other hand, seems to be on an upswing. The article suggests that Delhi has many things that make it a city you want to live in - a new Metro (finally, safe public transport for women), new roads and flyovers, an increasingly cosmopolitan mix of people (unlike the earlier Delhi of Punjabis and Haryanvis), and a happening cultural scene. Most importantly, Delhi is not a state capital; it is not constrained by the demands of less prosperous rural surroundings, therefore it can determine its own future.
So what do you think? Does the 21st century belong to Delhi?
Email ThisBlogThis!Share to TwitterShare to FacebookShare to Pinterest

Do beleive Delhi is moving towards being the only World Class city of India...and is way ahead of Mumbai, which i beleive is living on past glory and dying of a regressive political mindset...

I guess Bangalore will give it a good competition...

bombay will remain its financial capital.
delhi is only the nations capital, and money flows to delhi via bombay (bombay/mumbai etc etc)
and with the current form and style of political government and with the clout of money over power and vice versa, bombay will rule, until and unless money is made in delhi as well

It takes a lot to be a 21st century city. A financial hub does not get created in a decade or two it takes centuries.

Mumbai's asset is its multi-cultural inhabitants who offer multiple skills to drive the financial engine.

It's true that money drives the city and that in turn drives a lean process that is unmatched anywhere in India.Be it public transport, "dhabbawallas", professional behaviour, or safety.

The traffic though heavy is well behaved.I've seen more dented cars and worst driving in Delhi last week than in Mumbai. Bengaluru with it's software engineers on bikes has more chaotic traffic than Mumbai.

Coming to the sena brigade, they are insisting on what is already on in other cities.......local pride. One needs to be in Chennai or Kolkata to understand it.

What is the percentage of revenue that Mumbai generates and gets back for development? minimal. Did riots happen only in Mumbai?

Life in Mumbai is not an easy one but every one finds a way to live.

Delhi has to come a long way from the ruling mentality to generate considerable wealth in an efficent manner.

Washington with it's memorials and museums may be great but the crowded NY city is the one that generates the money. Same here.

Bangalore is in its infancy and can take on nothing greater than maybe Hyderabad! What makes Bangalore popular is the young crowd there, again which is good mix of ppl from other parts of India, as a city it sucks. The infrastructure has a long way to go before pubs can beat dhabas!

Mumbai is the cash generation machine for the country. But for who? Its got Bollywood, so its got glamour. Again where does the most powerful of these Bollywood personalities hail from and owe allegiance to? SRK - Delhi, Akshay Kumar - Delhi. Priyanka Chopra-Delhi.. etc.

Chennai - I dont think its even in the picture.

Kolkata is a old decadent and gone..

Delhi - The influence of Delhi in the rest of India comes from the political power that it exudes. The money may be made in Mumbai but it is siphoned off to subsidize goods in Delhi. Port cities like Chennai, Mumbai and Kolkata where fuel prices should be cheapest because we import 90% of our oil needs, have the highest fuel prices. Delhi however controls the fuel prices all over the country and not surprisingly, fuel is cheapest in Delhi (include LPG, CNG etc).

Infrastructure in Delhi outscores any City in India. Mumbai has the most horrible roads. I dont know if they call them roads in Bangalore. Chennai probably has next best roads. Kolkata, well.. least said the better. If you want to ride your sports car in Mumbai you will most probably end up in Pune, because its the only road. That is not the case in Delhi. Lamborghinis are driven in daytime and on open stretches they scream away(in the heart of the city). You can only imagine what happens at night on Ring and Outer Ring roads in Delhi.

Money can be made in Mumbai/Bangalore.. it will always find its way back in Delhi.

I Think rather discussing 21st century city we are suppose to think as a 21st century COUNTRY and then the universe......

Very nice blog. Loved the content! Brings out the truth!
We still love our cities and Delhi has a special connection to us. We have a wonderful design made for Delhi. Check it at http://www.teesort.com/teesort-winner-dilwalon-ki-dilli.htm

Nice short write up leading to a difficult question which may not find an easy answer. I see many responses already. I have visited Calcutta multiple times and from all these visits, it is not in the race at all .. ppl lead a very laidback life there and to catch up all the lost time of 2 centuries at snail's pace is impossible.

Laurels for Bangalore,a resident for 6 years in this city, I find it nowhere close to competing with Delhi. Bangalore is overstifled by the migrant IT population and still staggers to manage the "cool" tag. My tie up with Chennai for 20 years only tells me that whatever aspect it catches up with alongside Delhi .. on the weather aspect - people will love to detest it - it is hot, hotter, hottest always in Chennai.

Delhi is the only national capital and mumbai is the financial capital...you are right.


Thanks for u effort..