Delhi to Agra by train

It started, as many trips do, with chaos.


We were taking the 6:15 express train from Delhi to Agra. We got to the New Delhi Railway Station in time, but were met by a crazy mess of cycle-rickshaws and cars and autos and buses, all trying to get to the same place, and weaving in and out of the "lanes". A 20-minute hold up, while we debated how heavy our bags actually were, and if we should make a last dash to the train on foot. 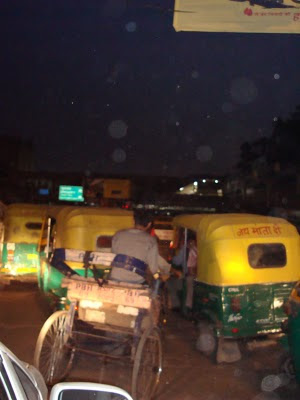 As we neared the station, the mess worsened. Meanwhile a bright yellow board smiled down benignly at us. "Zero Tolerance for traffic law breakers" it said. I simply had to grin. Our car driver was confident. "Don't worry, madam, there is enough time". 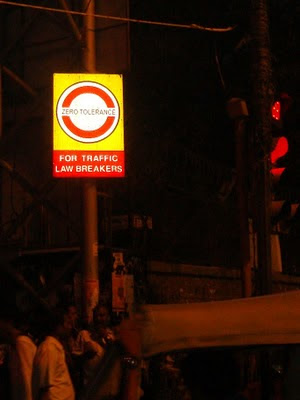 The sky lightened while we waited, and finally we entered the station with 15 minutes to spare. The first thing we did was to find a porter. We gave him our bags, and told him our train name. 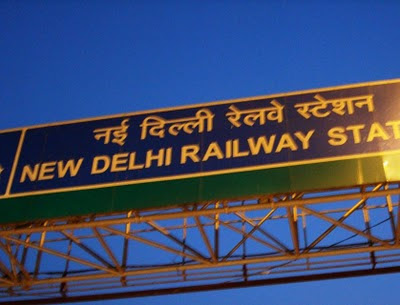 Inside there was the usual crowd, but the big pink and red board was easy to read. We found our train was on time. 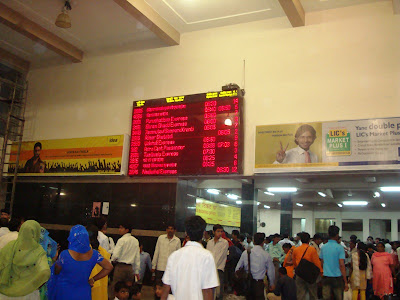 As we walked inside the station, we found people waiting for trains. There are simply not enough seats, so people with long wait just find a convenient place, spread a newspaper and sit down. Most of the pillars were already taken :) 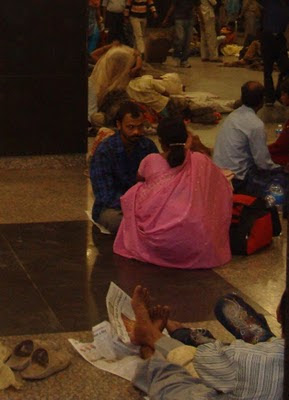 We trundled blindly along behind our porter, trusting him to find our train and coach. That's my husband with his laptop. I hurried behind them, stumbling as I clicked and half-ran, half-walked. In case you didn't know this already, porters in Delhi walk really fast! 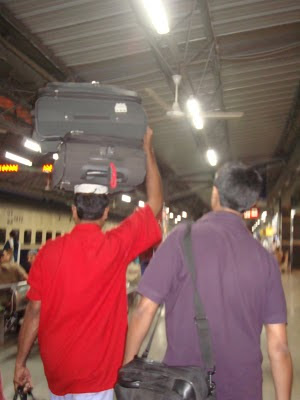 Voila! Our compartment! The porter was right as usual, leading us unerringly to it. I got a photo of him as he waited for me to catch up. 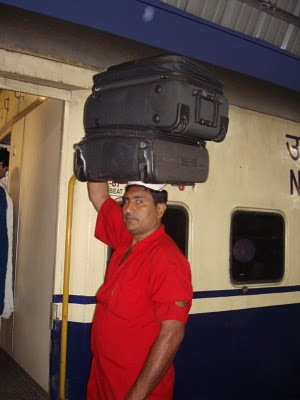 We checked and found our names neatly printed on the Reservation Chart stuck near the compartment door. 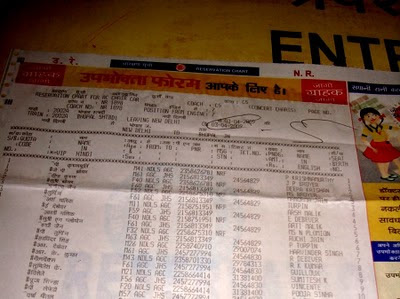 He helped stow the bags, and smiled his thanks when we paid well. 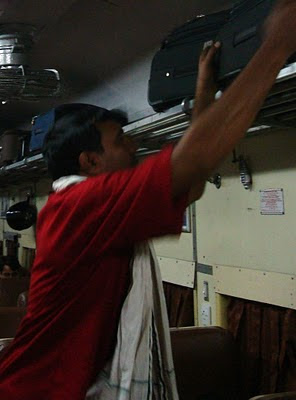 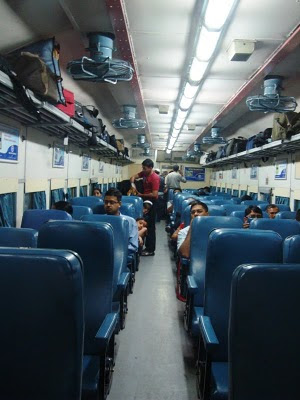 In spite of the traffic, we had arrived with some minutes to spare, so I went exploring. The cabins are connected through little gangways, the toilets are near the gangways. 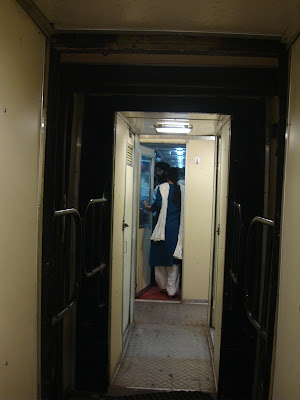 I pushed open the toilet door somewhat gingerly and took a peek inside. It was a Western-style toilet, with toilet paper, but not a particularly nice toilet. I was glad it was a short trip! 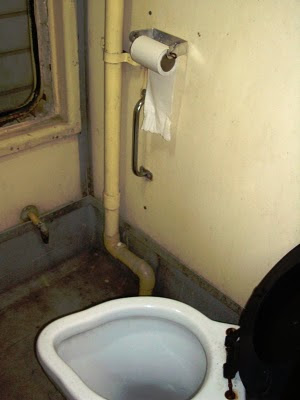 I stepped out of the train to click some photos. Several families were waiting for our train to leave, and for the next train to come in. 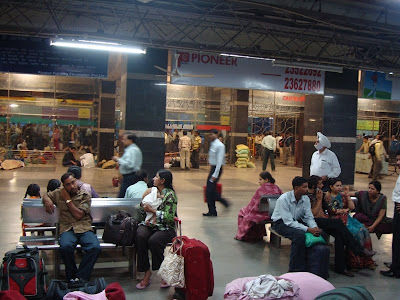 A railways employee was transferring what looked like the post. Piles of blankets and pillows were on the station, perhaps to be transferred to the next long distance train. 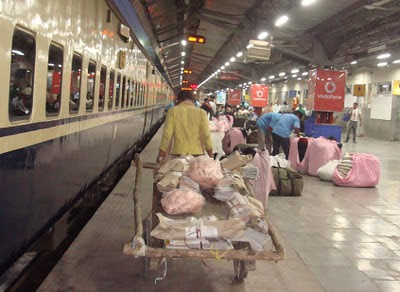 I went back inside the train, just in time for the newspaper delivery. The turbanned "bearer" is a cool idea! The Railways employs 1.4 million people, by the way, but very few of them have turbans :) It is India's single largest employer.

As we settled down, the train moved with a little jerk; and we were off to Agra! 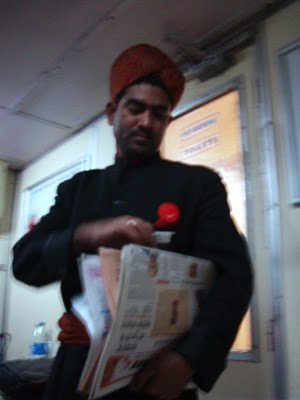 A security guard came round, checking that all was well. 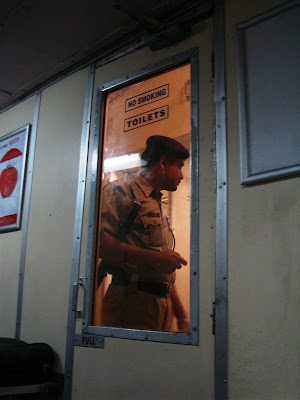 In about 15 minutes, morning tea arrived on a bright red tray, with a couple of biscuits. It was very welcome. For me, the worst part of the Agra trip was having to wake up at 4:30 a.m. and get out of the hotel by 5:30 a.m. without a decent breakfast. I polished off the biscuits but I was still hungry. 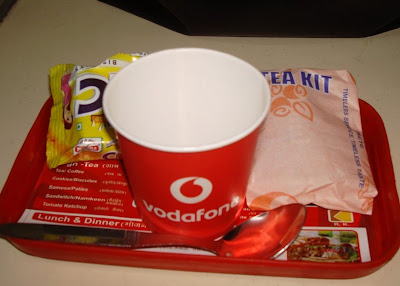 Then came the ticket checker, to inspect our tickets. 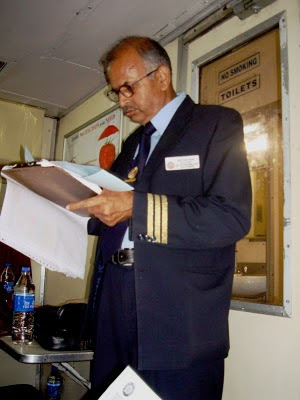 I was glad to see the breakfast tray. It was a mediocre breakfast at best, but I didn't care. I polished off two slices of bread with jam, and ate my oily cutlet. My husband had an egg omelette instead of the cutlet. 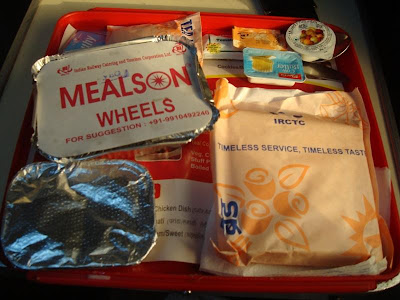 After breakfast, I tried to snooze a bit, since I was still groggy. In any case, there isn't much by way of scenery. We pulled into Agra Cantonment at 8:15, to a pleasant sunny morning. We had pre-arranged to be met at the station, so everything was nice and easy, we had another porter to manage the bags, and all I had to do was walk out, clicking away. 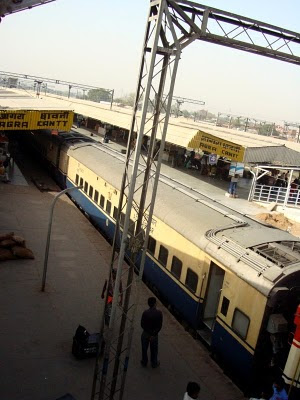 Here's the exterior of Agra Cantonment. It was less crowded than I expected; or perhaps most of the crowd had dissipated by the time we exited the station. 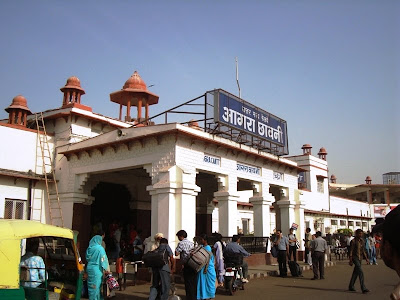 And so ended our train trip from Delhi to Agra. Of the 9000 or so trains that the Railways runs, this is one of the most popular ones on the tourist circuit. If you're taking this train, you will arrive too early in Agra to check into your hotel, so it is better to head straight to the Taj, and then go later to the hotel for check in and lunch. Also, I guarantee you, if you're anything like me, you'll be sleepy after lunch, so plan a little snooze before you head for Agra Fort at 3:30 p.m. And stay the night at Agra if your itinerary will allow it. Heading to Jaipur (5 hours), or back to Delhi, (long wait for the express return train at 8:30 p.m.) can be very tiring.

Post-Script: If you are considering a day trip to Agra, please see this new blog post. I wrote it after the new expressway to Agra opened in 2012, and it has timings and schedules for how to best manage a day trip.
Email ThisBlogThis!Share to TwitterShare to FacebookShare to Pinterest
Newer Post Older Post Home