.
Shahjahanabad - yeh dilli hai mere yaar...
.
If you open any Delhi Guide Book, you'll see the city divided into two parts - New Delhi and Old Delhi.
.
By Old Delhi, they mean Mughal Delhi, Shahjahanabad, the city that Shahjahan founded in the mid-1600's. It was the new capital of the Mughals, a prosperous city of fabled riches, of elegant mansions and gardens.
.
Two hundred years after it was founded, Shahjahanabad fell to the British. The end came as a consequence of the Sepoy Mutiny of 1857, when Indian troops (sepoys) in the service of the East India Company rebelled and tried to overthrow the Company. Fighting spread across the Gangetic plain and Central India as civilians rallied under local banners and joined the resistance.
.
Shahjahanabad was the epicenter of the battle. The 82-year old Mughal Emperor Bahadur Shah II - more a poet than a commander - became the frail figurehead under which Indian forces rallied. Indian rebel troops arrived in Delhi in May 1857, routing the small British force which was present in Delhi at the time.
.
Over the next 5 months, the British (with their Pathan, Sikh and Gorkha regiments) laid siege to the city. On September 14, they stormed into the city through Kashmere Gate.
. 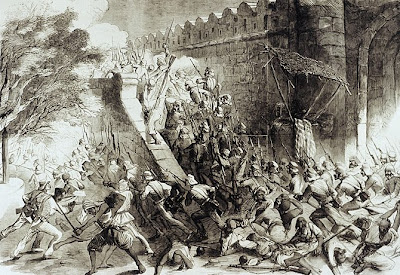 The storming of Kashmere Gate
. 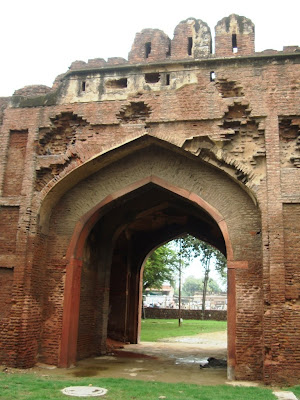 The gate still bears marks of cannon.
After a bloody fight that raged through the streets of Shahjahanabad, the Mughal empire ended.
.
The fall of Shahjahanabad, and the surrender of the Mughal emperor Bahadur Shah, had far reaching consequences. The city was looted, its civilians killed, the Red Fort vandalised...it became a ghost city as many of its inhabitants fled.
.
Today when you walk into Old Delhi, you can still see the ruined mansions and gardens, vestiges of the once glorious Shahjahanabad.
. 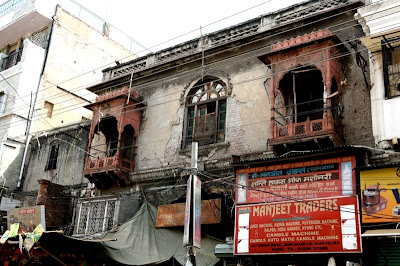 To me, Shahjahanabad is the very heart of Delhi. If you explore Shahjahanabad on foot, then amidst the crazy noise and chaos, Delhi's history will still call out to you. There are so many buildings here, each with a story to tell. You just have to stop and listen.

Previous post in this series: Ten things that define Delhi - (7)

Wow! This is interesting to know. How many times have I walked through the streets of Old Delhi without thinking about the kind of history these walls have to tell.

I am on a food trail to Delhi. May you kindly help me to list down the famous and trusted eateries I may visit to complete my food trail. A similar blog on delhimagic has no name of the eateries to go to.
mulshankar13@gmail.com
Regards.