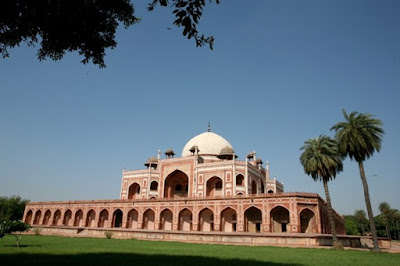 Humayun’s Tomb in Delhi – a relaxing Char Bagh-styled Persian garden area that served as the inspiration for the Taj Mahal
To me, Delhi has always been the city of the Great Mughals.
.
Babur, the first Mughal Emperor, was descended from the Mongol invader Ghengis Khan on his mother's side and on his father's side the infamous Timur (Tamberlane). The word Mughal itself is derived from the word Mongol.
.
Babur was succeeded by his son Humayun in 1530. But Humayun was only 22 and soon lost his territories to the Afghan Sher Shah Suri. He regained them with Persian aid ten years later, returning with a large retinue of Persian noblemen.
.
Humayun's return with a Persian entourage signalled an important change in Mughal Court culture. The Central Asian origins of the dynasty were now largely overshadowed by Persian art, architecture, language and literature.
.
The Persian influence is still visible today, not only in the monuments of Mughal Delhi, but also in the Urdu language and Mughlai cuisine of Delhi.

Previous post in this series: Ten things that define Delhi - (5)

Next post in this series: Ten things that define Delhi - (7)
Email ThisBlogThis!Share to TwitterShare to FacebookShare to Pinterest

Hey a lot of this doesn't ring a bell for "my Delhi" at all. The Metro, Dilliwali, Humayun's Tomb - none of these fit in. For me, it's a whole lot of other stuff - dust storms (including my one and only hailstorm !), street vendors selling cold water, the green Delhi buses (what a change from a decade ago !), so many large parks (at least that's what I can remember from when I was a kid), Feroze Shah Kotla (and Kumble's 10-fer)...and road rage I guess, unfortunately. The only place where I can expect to get shot at if there's a little incident on the road. The list is different for everyone I suppose