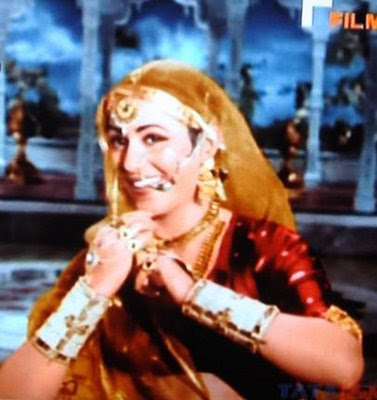 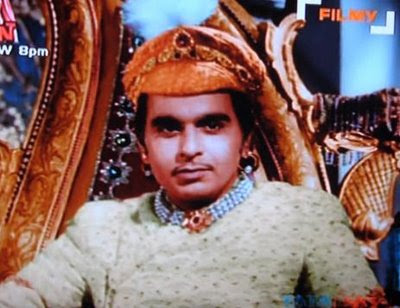 For a battle sequence between Akbar and Salim, 2000 camels, 4000 horses and 8000 troops were used, many of them soldiers on loan from the Jaipur Regiment of the Indian Army. In the movie, Salim's father throws Anarkali into jail - and Asif ordered that real irons be used, not fake light ones. It was Madhubala's greatest ordeal in the film and she was bedridden for days nursing the bruises caused by wearing those chains.
.
Shooting began in 1944, but was completed only in 1960. In 1957, colour technology came to India, and Asif was immediately galvanised to shoot the movie in colour. By then, of course, the cost of the movie had already reached astronomical proportions, so only 3 reels were shot in colour, and 85% of the movie remained in black and white. When you went to the cinema, it started as a black and white film; then changed to colour, went back to black and white, and then colour again! The movie was recoloured recently, and relaunched in 2004. I guess Asif would be happy.
.
Strangely enough, I've only seen the movie in bits and pieces. I watched one dance clip recently on TV (from where I got the photos above). It prompted me to write this piece, and now I'm itching to buy the DVD. But I think I'll need to brush up on Urdu before I attempt this film!
Email ThisBlogThis!Share to TwitterShare to FacebookShare to Pinterest

I simply love/loved the music! And the defiant 'Pyar kiya to darna kya' had us roundeyed in wonder with its attitude.

I love this movie! I have the DVD with english subtitles, yes my urdu is close to nothing. I am french by the way, and I live in Delhi for 15 years. A proof of the exchange of culture, I have taken some of indian ways; This to fill the cultural discussion regarding Valentine's day.
I just came across your blog, and I will come back.

The great, great and great movie. I just love it.
Agra India

Really Gr8 ! Thanks For sharing..