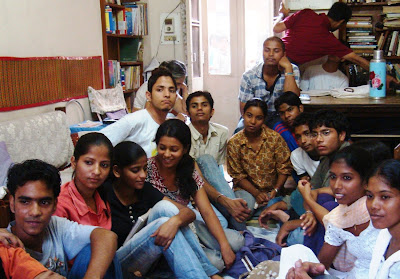 The guides for the tour are special too. They are a group of youngsters from Manzil, an NGO that works in children's education. The kids at Manzil come from diverse backgrounds, but they are all united by a keen sense of wanting to learn, of wanting to make something of themselves. I was amazed and humbled and challenged by the energy and spirit I saw among them. We've now selected eight students from Manzil, and have started a training program for the tour. We're teaching them history, geography, and speaking skills, using a script researched and written specially for this tour. Manzil's own volunteer team is helping with the training as well.
The tour itself is interesting, and covers both New Delhi and Old Delhi. It starts at Connaught Place, with an introduction to the history of Delhi, and a geographical orientation of the city. From there, we take tourists by auto on an exploration of 'Lutyens Delhi' - the city of grand public spaces designed by the British, which is now called New Delhi. We drive through the Central Business District, seeing the markets and businesses there. We go to the Lutyens Bungalow Zone, Janpath, Rajpath, and visit the President's House, Parliament House, Secretariat and India Gate.
After this, we board the Metro to go to Old Delhi, where we experience the bustle of the bazaars both on foot, and using cycle-rickshaws. We will see the famous Jama Masjid (the largest mosque in India), Dariba Kalan (the silver market), Kinari Bazaar (wedding market) and Paranthewali Galli (Lane of Parathas). We'll visit Gurdwara Sees Ganj Sahib, built at the site where Guru Tegh Bahadur, the ninth Sikh Guru, was beheaded for refusing to convert to Islam. We will also see Hindu temples, Jain derasars and churches, all standing cheek-by-jowl.
The final stop at the tour is the legendary Haldiram's for chaat and a cold drink. After that, we clamber on the Delhi Metro again, to end the tour at Connaught Place.
.
So - what do you think? Sounds good? If you are a Delhi local, tell me if you think I should improve something. If you're an overseas visitor, does it sound appealing? If any of you want to be guinea pigs at discounted prices, let me know!
.
Here are some photos of the tour training in progress.
Email ThisBlogThis!Share to TwitterShare to FacebookShare to Pinterest

We will be more than happy to recommend this to our guests who visit Delhi! Let us know when its up and running. Association with Manzil is fabulous and this is the right way to tramsform Indian travel industry. Initially when we started our work, TBY had to employ its own staff to promote tours in River Nila. By building their capacities over the last 4 years, now the tours are entirely run by our communinities, including high-profile press trips.
We will be more than happy to share our experiences, may be we should think about doing a workshop as an exchange program..Delhi to Nila, Nila to Delhi??

This sounds brilliant and would definately be something i will want to do when i visit India.
I will be checking out your website when I come yo ensure i do your tour.

In my view, the place in the world which has packaged tourism best is Barcelona. It will be the only city where everything offered by the tourism department is so well marketed that a tourist doesnt feel embarassed even to book a hop-on, hop-off bus tour!

Based on experience of the guided walks and themes around which they are being marketed, I would think following three walks would have a great potential with tourists:

1. Secular India Walk: A Walk from Jama Masjid (a religion where animal sacrifice marks an important festival) through Lal Jain Mandir (of a religion which considers killing an insect a crime), through the Church, Seeganj Gurudwara (in the memory of Guru's sons beheaded by family of those who built the mosque), to Fatehpuri masjid : I have used rhetorical descriptions, but in today's world of religious intolerance, every westerner I have talked is unable to conceive that you can walk through all this over a kilometer and a half! The story strung along with history and architecture as in most walks should be facinating and mareketeable

2. British India Walk; Covering the Victorian architecture, Lutyens Delhi, Rashtrapathi Bhavan, Parliament House, India gate - together with the story of freedom movement and Mahatma Gandhi (not sure if either Birla House or Raj ghat can be included). If it was in Europe they would converted one of the Lutyens Bunglows with all British furtniture into a tea house where the walk would end !

3. A Culinary Yatra of Delhi: The EoiD guys would plan this much better, but Chandni Chowk and surrounding areas have such treasure troves that they can match a tapas trail in Andalacia! Not sure if many tourists from abroad would consider all the places hygenic but those from other parts of India including the upwardly mobile population of southern states who have travelled abroad and done such walks should find it of interest

Hello there! I am actually travelling through Delhi from Nov 27th-December 2nd, and I would love to go on this Delhi by metro tour! Could you give me more information? My email address is zina.alam [at]gmail dot com

It is extremely interesting for me to read the blog. Thank you for it. I like such topics and everything connected to them. I definitely want to read more soon.

Good Day!!! delhimagic.blogspot.com is one of the best informational websites of its kind. I take advantage of reading it every day. Keep it that way.