The Southwest Monsoon will be upon us next month. Delhi is baking-hot right now (88 °F / 31 °C), but the blessed rains will bring cheer to everyone, especially farmers and traders. The Southwest monsoon represents more than 80% of India's annual rainfall. Indian agriculture is still largely rain-fed, and produces 20% of our gross domestic product.
.
For those of you who are planning to travel to India between May to September this year, let's look at what the Rain Gods did last year, shall we?
. 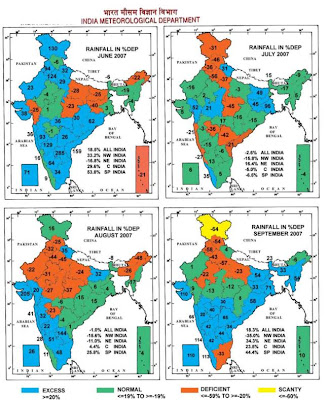 In 2007, the Southwest monsoon arrived over the south Andaman Sea, Nicobar Islands and parts of southeast Bay of Bengal on May 10. It was 5 days ahead of its normal date.
.
There were some disruptions, after which the monsoon revived gradually and arrived over Kerala on 28th May (again about a week earlier than its usual June first week arrival).
It advanced further up the country on 8th June, after a hiatus of 9 days. It covered the north-eastern states by 10th June, Peninsular and Central India by 25th June and subsequently the entire country on 4th July, nearly 11 days ahead of normal date.
We had good rains last year - overall 5% more than normal. Click on the image to see the rainfall distribution pattern across different states. The red states are the ones that didn't get enough rainfall last year. The blue ones got more than average, and the green ones are those that had normal rainfall.
.
Last year there was an unusual delay in the withdrawal of monsoon from extreme west Rajasthan (cyclonic circulations, said the Met, whatever that means!). The southwest monsoon withdrew from western parts of Rajasthan and some parts of Punjab and Haryana on 30th September (normal date of withdrawal from west Rajasthan is 15th September).
.
I'm waiting to see the forecast for 2008. There was one report that said it would be early this year. We had unseasonal rains in Kerala and Andhra Pradesh in March this year. I haven't yet seen the forecast for 2008, I'll look for it online and update this post in a couple of days.
Email ThisBlogThis!Share to TwitterShare to FacebookShare to Pinterest

I look foward to your update as my wife and I will be in Mumbai and Goa from June 01 till June 10,and hope to miss the monsoon.Hopefully it will not make life too uncomfortable if it arrives early!

Thank you,we should miss the monsoon then.No slow boat to the airport for us!

nd here we are from Kuwait..eagerly waiting to experience the monsoon...and hopefully a small flood too...

had enough of dusty sprinkles....

No update yet from the Met department for 2008. Will post as soon as it is up.

Deepa, can I look forward to Delhi? We should be moving there later this year, after finding a suitable house, and school.

Update from the IMD's monsoon forecast for 2008 - it is going to be a normal monsoon i.e. no scarcity of rain or excess rain. Good news for everyone.

In May they usually post their expected date for the onset of the monsoons. Waiting for it.

Meanwhile, we had squally conditions and rains in Delhi. I was in Simla this week, and it was raining there.

One more update today - monsoons are expected to set in over Kerala on May 29, with a possible error of 4 days this way or that way.
http://www.imd.gov.in/section/nhac/dynamic/mon-prog.htm

Update: Rains expected in Mumbai June 8-10th (from the Times of india today)

Mumbai and the entire sea-kissing Konkan strip are expected to receive more than their normal share of rain this season, while Nashik, Kolhapur and Nagpur districts are likely to be lashed by occasionally heavy rains, according to a scientific study by the Pune-based Agriculture College affiliated to the Mahatma Phule Agriculture University in Ahmednagar.

With rain showers likely to touch Maharashtra between June 8-10, Dr Ramchandra Sable, head of the university's agriculture meteorology science department, said that Mumbai, Thane, Raigad, Ratnagiri and Sindhudurg districts could expect 102% rainfall. Anything between 5% and 100% is classified as normal rainfall.

Hi We are looking to book a week in Kerala and a week in Goa in November / December. We know Goa but have always been in March. Guide books indicate Kerala may be wet at this time? I would welcome any guidance.

The period October to December is referred to as Northeast Monsoon season.

The principal rainy season for Kerala is the Southwest Monsoon season (June to Sep), but rainfall does continue until December. The period October-December accounts for about 20 % of Kerala's annual total.

Northeast monsoon rains occur in spells of about 3 to 4 days duration. Spells exceeding 4 days are much less (20%). There are at times long spells of dry weather with little or no rain.

Wooohooo! It rained last night in Mumbai! Just a brief shower, five minutes or so. My daughter went out to get drenched and came back grinning.

On June 2, the rains advanced into Karnataka. Another couple of days, and they'll be ready to move on further!

many thanks, looks like we will give it a go and hope to miss most of the rain.

I am just seeking your advice about monsoons in september. We will be arriving in Delhi on the second of september, to go backpacking for a month. Where we go is dependent upon the rains, do you have any advice? We plan to visit Rajastan- what is the expected rainfall for here? Also- we would love to visit some sunny beaches, but is this an unachievable dream??!

Please see this link for my advice on sunny places and beaches in September:

I found this site using [url=http://google.com]google.com[/url] And i want to thank you for your work. You have done really very good site. Great work, great site! Thank you!

Hello Deepa, do you know what the rain gods might be organising for 2017? Thanks, Manda.

Should be ok to visit Kerala, it will be the end of the monsoon period. There are beaches in Kerala, Kovalam/Varkala are popular with tourists, and there is also Marari Beach.