In a crowded little spice shop in Khari Baoli, I found a Sri Yantra hanging on the wall, alongside heaps of pistachios, almonds and dates. The man in the shop smiled at me in a benign sort of way. Business was brisk.
. 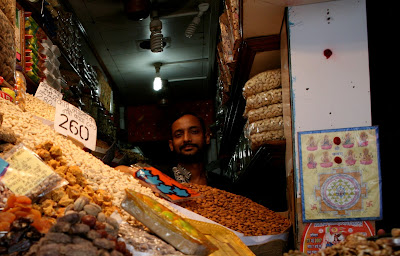 The Sri Yantra was drawn on a faded piece of paper, covered with plastic to protect it from the elements. It was anointed with two vermillion dots. Clearly, the shopkeeper believed it would bring him luck. The little shop was filled to the brim with spices; maybe it was the yantra doing its job!
.
I've never understood this Sri Yantra thing, perhaps because I didn't grow up with yantra-worship at home. But geometric figures - symbolic representations of divinity or truth - are common to both Hinduism and Buddhism. They are most commonly seen in the traditional rangolis and kolams of women. The most auspicious of these figures is the Sri Yantra. Here's a better illustration of it: 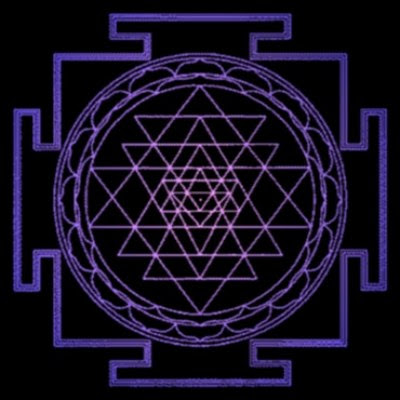 Here's a three-dimensional view of the Sri Yantra. I am oversimplifying, but in this form, it is easier to see how you can focus on the Sri Yantra as a way to ascend from the outer material levels to the ultimate reality of the bindu. 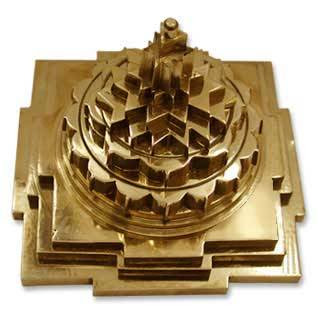 hi,
more than the yantra I liked the way you've written about ur self ( or the different LABELLINGS!)
just to add there are two types of sriyantra one has a male dominance and other has fem dominance.(ref to triangles)

Thanks for introducing those two symbols. I had those before with me and I forgot what they actually mean.