I have to admit, at the very beginning of this post, that I'm vegetarian.

I've been vegetarian all my life. Anything I write about meat, is therefore totally suspect. Still, these photos speak for themselves, so I should be ok! 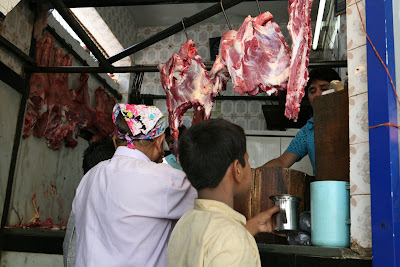 This area of Nizamuddin is predominantly Muslim. This is one of the neighbourhood butchers. Check out the wooden chopping block - it's a round tree stump. I wonder what the little boy is trying to buy. Do you know? On second thoughts, don't tell me - I don't *want* to know :) 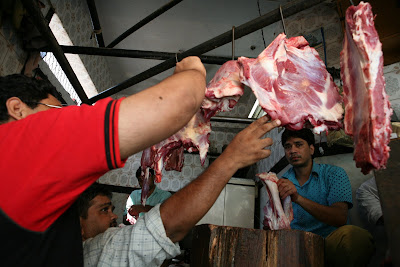 Some more customers walked in as we were photographing. Their motto seemed to be "inspect before you buy". There was a lot of examining going on, before orders were placed. Meanwhile the butcher was shaving off the remnants of meat from whatever it was that he was holding. Since this is India, it's probably whatever's left of a buffalo. 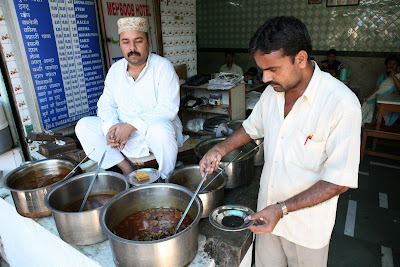 Further down the street was Mehboob Hotel - for ten rupees you could get a plateful of mutton curry and a tandoori naan to go with it. 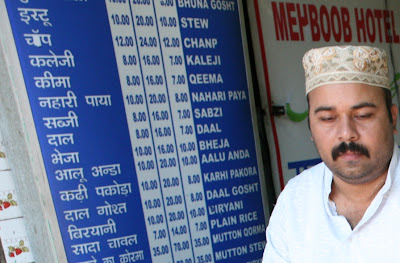 Here's a closer look at Mehboob's menu, it had both Hindi and English spellings -
...and so it goes on, the menu, tempting people to stop and eat.

If you walk further along the road, you'll also see this - meat on the hoof. To my vegetarian mind, this scene was both interesting and disturbing. On the left were the sheep, and on the right, a big aluminum handi in which they would later be cooked and served as mutton biryani. 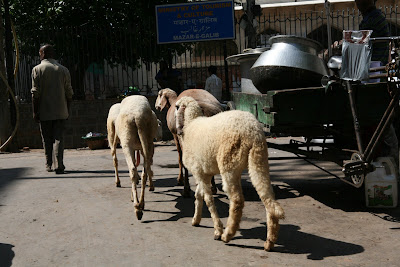 I walked a little further. A goat and kids sat by the edge of the road, cool in the shade. The black kid was shy, but the white one was the inquisitive sort. I said to myself, it's one thing to see meat dangling from a hook, or ladled on a plate. It is something else altogether, to see it look curiously at you! 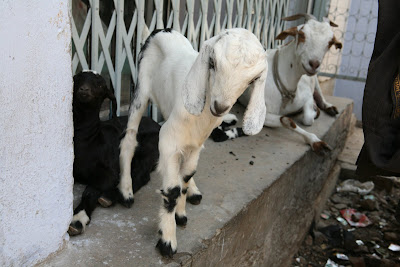 Walking along this area is difficult for me. I grew up in a family and social circle where almost everyone was vegetarian. Watching these gentle creatures in Nizamuddin, knowing that death awaits them, and knowing I cannot do anything about it, is very disturbing for me.

But I still think it is a good thing for me to see this place - because this way, I learn a very important lesson. I learn that not everyone is the same. Not everyone was brought up with the same beliefs as me. There are other communities and people, with other ways of life, all of which are just as equally valid. The things that seem disturbing to me are perfectly normal to someone else.

Perhaps this is the essence of all travel - it can give us the opportunity to see differences, to acknowledge them, and to accept their validity.
Email ThisBlogThis!Share to TwitterShare to FacebookShare to Pinterest

Isn't that ironical? The goat looking at us when alive and we looking at the goat when hanging as meat? When one sits down to think, it does reveal a lot about the reality of life. Nice work.

Touchy? I not sure what you mean.

//On the left were the sheep, and on the right, a big aluminum handi in which they would later be cooked and served as mutton biryani//

Deepa, I want to start by saying that I really appreciate your intelligent and concise, entertaining posts. They really give you an otherwise sorely missed glimpse into the daily hustle of Delhi. It sends my nostalgia into overdrive. I noticed that you are also a regular at the Tripadvisor forums. I wanted to ask you for some tips on eating out in Delhi. I tried looking through your previous posts, and found a smattering of posts; I would appreciate it if you could narrow down all your best recommendations (i.e vegetarian, non vegetarian, Chinese etc) for food in the city. I really need to pig out after reaching a BMI of 18 (pretty lean). I will definitely stuff myself there. Kind of like a gastronomic journey. I would especially appreciate recommendations for various Punjabi foods, (butter chicken, choley etc) I am Rajput, but have a weakness for these comfort foods. You see, I am a NRI that has not had the opportunity to visit India for the past seven years. I unfortunately don't know much about Delhi. Please respond. Once again, I appreciate your expertise on the subject. Shukriya.

Beautifully sharp observations which are all supported by extremely good articulation.