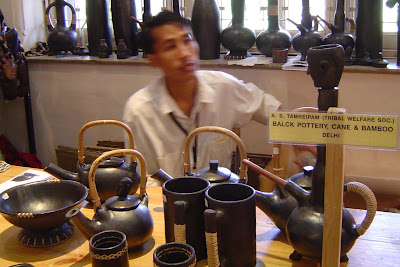 From Manipur, a little state in the easternmost part of India, comes a craft that is both interesting and useful - Longpi Ham, the lustrous black pottery of the Longpi Village.

Longpi artists make striking pots, mugs and vases. They're all black in colour, simple and almost minimalistic in their design.

What gives Longpi its appeal is the finish. The pots and vases are smooth and lustrous. When you touch them, your fingers glide over the surface, and they leave you wondering if this is stone, ceramic or clay. 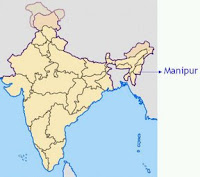 At a recent exhibition, I bought a set of 6 beer mugs from A. S. Tamreipam, a Longpi craftsman from Manipur. That gave me the perfect opportunity to ask him about this craft.

"Is this black terracotta?" I asked him. "No", he said, "it is stone." He rapped on it with his knuckles. Yes, it was stone. But stone that looked like clay?

I was intrigued, and looked it up a bit. I found out that Longpi pottery is actually made by crushing stone into powder and then mixing it with clay. 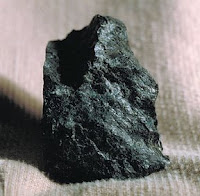 But Longpi craftsmen don't use just any kind of stone. They use serpentinite, a dark black stone that powers the fascinating hydro-thermals of the Lost City in the Atlantic Ocean. When serpentinite is formed, the process releases large quantities of heat. At the Lost City, this has created an eerie undersea world populated by strange invertebrates. (By the way, serpentinite is also the state rock of California.)
So anyway - to make Longpi pottery, you first hunt for serpentinite. Then you pound it into powder with a hammer, and mix it with other materials to form a sort of dough. You shape the dough by hand into the things you want to create. There is no potters wheel, there is only the skill of the artist. When you finish, and it hardens a bit, you bake it in a kiln at 900 degrees Centrigrade.

When it's taken out of the kiln, it is then polished with a local leaf called Chiron Na. That's what gives it that lustre.

Longpi beer mugs, anyone?
Email ThisBlogThis!Share to TwitterShare to FacebookShare to Pinterest

From where can i get these??/any contacts

from where do you get these pottery...any contacts???

The Panthoibi Manipur Emporium at Baba Kharak Singh Marg should have these.

Hi, Can you tell me how much they cost?

Sorry bought them a long time ago and don't remember the price.

You may look and order Manipur Stone Pottery items at http://www.rangiru.com/category/manipur-stone-pottery/

We are glad to hear that people like Longpi art. We are supporting artisans and their talent to provide a suitable platform for their growth.

For Longpi product's inquiry you can contact us at

thank you so much for your beautiful write up madam
like the proverb To get the full value of joy you must have someone to divide it with.thank you for sharing the beauty of longpi pots. iam feeling wonderful reading your article.

A good selection of exquisite Longpi black pottery from Manipur is available for online purchase @ www.giskaa.com

I need to contact the person who practice longpi pottery for my collefe project ...please help me with the details..I will be highly obliged if you do it fast