A little primer on Hindu Literature

Working in tourism, I meet a lot of people whose religion is enshrined in a Book. The written word is held in great reverence, and the Book has a position of religious and moral authority.
Coming from that kind of background, a lot of tourists naturally ask me "What is the holy book of the Hindus?". Usually I tell them a simplistic answer, for example, I usually say "The four Vedas are the primary books".
But it's not that simple. The Vedas are not really "books", are they? They are ancient oral recitations that were written down much later. The truth is, Hindus don't really have a universally agreed upon single "written" Holy Book. What we do have, is a vast oral as well as written tradition which serves as the source of religious, moral and philosophical knowledge. Combined together, these make up Hindu religious literature.
Most Hindus themselves don't know how this literature is classified, so I wrote this little primer (my mom helped me put this together). I realise the article is somewhat school-bookish :) but this information is surprisingly hard to find.
Hindu scriptures are broadly divided as follows:

The Srutis (Vedas, Brahmanas, Aranyakas, Upanishads):
The Smritis (Smritis, Itihasas, Puranas):
While the classification of these scriptures is more or less well accepted, their historical dating is controversial. The major languages in which these scriptures appear are Sanskrit in the North, and Tamil in the South. Apart from these, Hindu literature also includes many other treatises - for example, the Sutras are shorter succint versions of Hindism's voluminous primary literature.
The above literature is common to all Hindus. But some Hindu sects have their own sectarian writings - such as the Samhitas of the Vaishnavaites, the Agamas of the Saivaites, and the Tantras of the Saktas.
Because of the huge size of oral literature, as well as the large volume of written texts and explanations, there is no single Book that everyone accepts as gospel truth. Instead, a large body of interpretations has flourished, which vary from place to place within India, allowing for a lot of flexibility in the way you practise Hinduism.
To me, the most amazing thing about Hindu texts is that in spite of the huge volumes, they have been committed to memory by a specialized group of people (Brahmin priests). In case you didn't know, in 2003 UNESCO proclaimed the tradition of Vedic chant a "Masterpiece of the Oral and Intangible Heritage of Humanity". Pretty cool huh? :) :)
We don't usually acknowledge or realize it, but we are truly lucky that we can still hear the same chanting of these texts as was heard thousands of years ago. Not many civilizations can claim that. We don't have to go to a religious centre like Varanasi to hear this; or to a grand wedding. We can hear it everywhere in India; even at a smallish family ritual. Here are photos of typically smaller rituals where you can hear Sanskrit chanting: 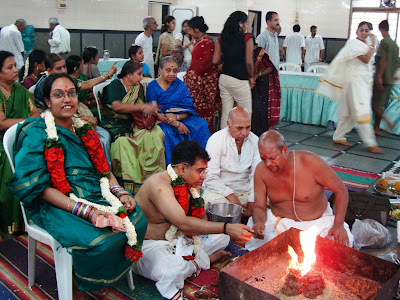 Kerala Palakkad Brahmin "Bangle ceremony" - to pray for the well-being of the unborn child. In this ceremony, the mother is usually in the seventh month of pregnancy. You can see the holy fire into which ghee is being poured by the father of the child. The priest is reciting a prayer which is repeated by the father. The chanting will go on for a couple of hours, and the sound of the mantras is thought to have a favourable effect on both the mother and the unborn child. 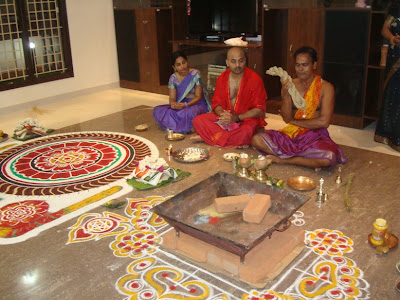 From Mangalore in Karnataka, a Grihapravesham ceremony (housewarming). Again the priest will light a holy fire. The couple whose home it is, are sitting beside the priest. The floor is beautifully decorated with designs using turmeric and red kumkum. The prayers and the smoke will sanctify the house, rid it of insects and pests, and make it fit for a joyful life. 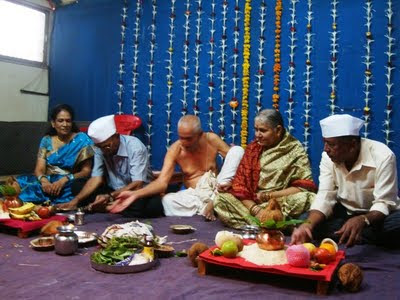 From Pune, Maharashtra: Engagement ceremony. The parents of the bride and the parents of the groom agree to give their daughter/son in marriage. The priest in the centre officiates. Auspicious gifts are exchanged. This is a sort of "contract" read out in the presence of witnesses. 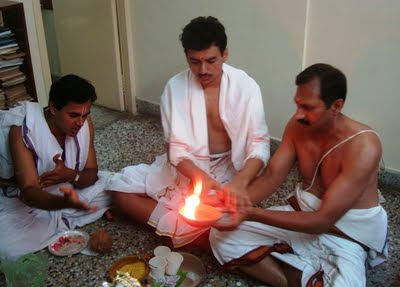 Sanketi Brahmin thread ceremony in Chennai - The young man in the centre is being initiated in "Brahmopadesham" - the Ultimate Truth. His father (on the right) follows instructions from the priest (on the left).
If I hunt through my photo collection, I will find lots more of these...proof that in the daily life of Indians, the old ways continue uninterrupted. Even though we live in a modern world, these rituals and texts provide continuity and emotional sustenance to the people who follow them. I guess this is what characterises "a living religion".
If you're curious about how the Rig Veda sounds when chanted, I suggest you try this link: http://www.vedchant.com/Rig.mp3 It sounds fantastic. After a minute or so, you'll find yourself caught in the rhythm and power of it.
Email ThisBlogThis!Share to TwitterShare to FacebookShare to Pinterest

This is very informative...thanks for compiling and sharing this.

The Bhagavad Geeta is only one chapter in the Mahabharata, which is one of the Itihasas mentioned above. It is thus only of the status of "Smriti" which is lower than that of "Shruti". However because of its importance and popularity, there are those who also call it the Gitopanishad, giving it the status of an Upanishad or Smriti.

The Mahabharata is a recent epic when compared to the Vedas, as it is dated to somewhere between 5th and 2nd century BC. Whereas the Vedas are much older.

Very nice.. Super deepa. Can you send any other reading material?

This is another informative article that helps this foreigner understand India just a little better. For consideration for later topics: Can you tell me more about the religious people/priests? There doesn't appear to be any centralized organization, is that so? Why do some live on the street? When one approaches me, how do I know if he is in a position to give blessings; once a priest yelled obscenities at us because we said 'no thanks' that doesn't seem like something a priest would do, is it?

The answers to your questions would take up an entire article :)

You're welcome to call me and chat about it.

My email id is deepa@delhimagic.com, you can mail me for the phone number.