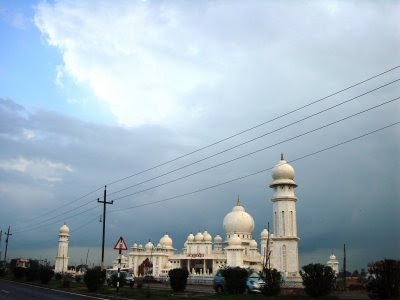 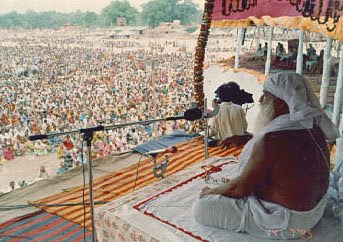 Hymn to the Sun God On the first storey of a house in the Walled City of Jaipur, I saw this man offering salutations to Surya, the Sun God. The man had a wet towel draped around his waist, proof that he had just completed his morning bath. There was no sacred thread around his body such as those Brahmins wear; perhaps he was a trader or merchant. His house, like others on the street, was painted in Jaipur's trademark pink.
Sun worship is an old tradition, that goes back to about 2000 BC. Descriptions of the Sun God in the ancient Vedic texts are awe-inspiring - they speak of the golden efflugent beauty of the Sun, riding a chariot drawn by seven white horses.
Here is a translation of a hymn from the Rig Veda, dedicated to Surya: this hymn is also a prayer against the dreaded yellow-fever /jaundice.

Swift and all beautiful art thou, O Sūrya, maker of the light,
Illuming all the radiant realm.

Thou goest to the hosts of Gods, thou comest hither to mankind,
Hither all light to be beheld.

Seven Bay Steeds harnessed to thy car bear thee, O thou farseeing One,
God, Sūrya, with the radiant hair.

Rising this day, O rich in friends, ascending to the loftier heaven,
Sūrya remove my heart's disease, take from me this my yellow hue.

To parrots and to starlings let us give away my yellowness,
Or this my yellowness let us transfer to Haritāla trees.

With all his conquering vigour this Āditya* hath gone up on high,
Give my foe into mine hand: let me not be my foeman's prey.

*Surya goes by many names - Aditya or First Born, is one of them.

Email ThisBlogThis!Share to TwitterShare to FacebookShare to Pinterest
Labels: Jaipur