At the dargah of Nizamuddin Auliya, I saw this young woman in prayer. She was not a fast reader. Her finger moved slowly, right to left, tracing the Arabic script. Her lips moved silently. In the five minutes that I stood there, she didn't look up even once. 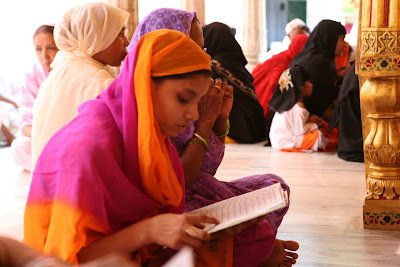 Her copy of the Koran seemed new. I wondered what passage she was reading, and how much of the Arabic she understood. Perhaps it wasn't important to understand, perhaps the sound and rhythm were themselves compelling.

Have you seen the opening lines of the Koran? Even in an English translation, without any rhyme to it, I can sense the powerful cadence of the words:
In the name of the merciful and compassionate God!

Praise belongs to God, the Lord of the worlds,
He the merciful, the compassionate,
He, the ruler of the day of judgment!

Thee we serve and Thee we ask for aid.
Guide us in the right path.

When I hear the muezzin's call in the evenings, although I don't understand a word of Arabic, it still resonates inside my body, and I am drawn to the sound. I feel the same way when I hear truly inspiring choir music in a church, or the deep chanting of Sanskrit.

I'm not religious, yet there is something fundamentally appealing in the sound of all prayer.
4 comments:
Email ThisBlogThis!Share to TwitterShare to FacebookShare to Pinterest

The Giving of Water

All cultures have it - the giving of food and shelter to pilgrims and wayfarers as an act of kindness.

This is Old Delhi's way of doing it - by giving free water to anyone who asks for it. In a hot country, naturally, this is the quintessential act of hospitality. A boy is employed, to sit there all day long, offering water to anyone who asks. The water is cold - they use big blocks of ice to cool it down. Someone rich sponsors the whole thing, and of course, earns much merit in the process. 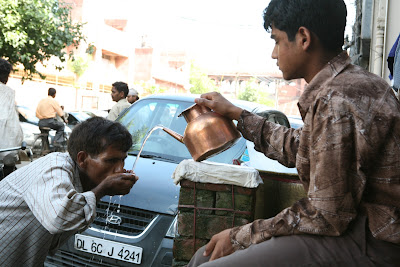 Hinduism uses the word athithi-dharma to describe every man's obligations to visitors or guests. It is one of the many dharmas a Hindu has. Others include dharma to your parents, to children, to ancestors, to birds / animals / plants and so on. As part of athithi-dharma, a Hindu is expected to attend to a visitor's needs before attending to his own.

The dharma of hospitality is not peculiar to Hinduism. There are several stories in the Bible, about men who took strangers into their homes. The Middle Eastern ethic of offering hospitality (and protection) to strangers is well known - in fact, there are elaborate and binding rules both on the host and the visitor. The Greeks were big on hospitality too - the god of hospitality is Zeus himself, and he's called Xenios Zeus (xenos means stranger, in case you didn't already know).

Mankind's long traditions of hospitality are still alive and kicking - for a modern international rendering of athithi-dharma, you really don't have to look beyond the CouchSurfers. Couchsurfing amazes me. What would make someone share their home with a complete stranger? I can understand this sort of thing if you live in a mansion with 20 rooms, with enough hired help to manage guests. But imagine living in a tiny apartment in New York! And waking up to find a guy snoring in your living room - or worse, messing up your one small bathroom. Gross.

Yes, there's the charm of meeting people from all over the world. There's the offchance that you'll meet someone warm and friendly (and clean), who'll tell you funny stories, help cook dinner, and - maybe they'll even like the same authors that you do. But personally, I think you should never get into Couchsurfing with any expectations. Just do your atithi-dharma. Make that leap of faith. And let events play themselves out.
1 comment:
Email ThisBlogThis!Share to TwitterShare to FacebookShare to Pinterest

I met a South American lady recently - she was the Technology Head for a large bank, she had studied in the US, and she was taking one of my tours. During the tour, we saw a very young couple, they seemed recently married. The girl could not have been more than 16, the guy perhaps 18 or 20.

"She's very young", said my guest. "Do you think this was an arranged marriage?".

"Probably", I said, giving her my stock answer.

"I don't know any official statistics, but I think over 90% of marriages are arranged."

"Does everyone marry this young?" 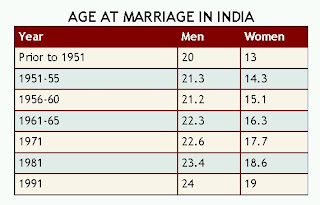 "Yes, but at the time the British left India, the average age of marriage was 14. We've come quite a way from there, especially if you look at the size of our population, and what it takes to change a whole nation's average in 50 years. It's nothing short of a revolution."

She looked at the young bride again. I could see her thinking, how does this girl feel about this? A stranger in her bed, chosen by her parents? What is this relationship really like?

And, seeing the couple again through my guest's eyes, I thought yes, how does this girl put up with this stranger in her bed?

My guest turned to me.

"Can I ask you something personal?"

I could see it coming.

"Did you have an arranged marriage?" she asked me.

Her relief was palpable.

"I cannot understand this arranged marriage business! How do you put up with it!!", she said.

I could see that for her, being told who to marry was about as medieval as it gets.

I launched into an explanation of expectations and conditioning, and how marriage in India is not between individuals, you marry into a family, so the more similar your backgrounds and religion, the easier it is to fit in. We spoke of East versus West, Hollywood's romantic brainwashing, divorce rates, the caste system, the obsession with fair skin, matrimonials, the shaadi.com revolution, and so on. She was a highly intelligent lady, a pleasure to talk to.

At the end of the conversation, she had heard it all, and it didn't change her mind a bit. The bottomline was - sometimes East is East and West is West, and there ain't no middle ground! 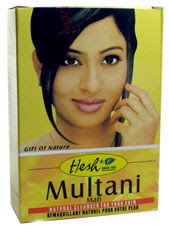 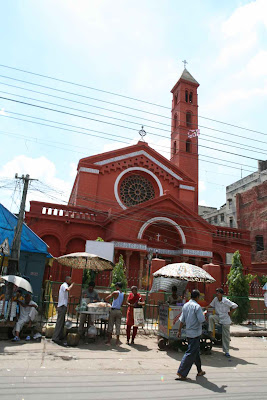 If you're in Old Delhi, take a rickshaw ride past Church Mission Road. Amidst the dilapidation and chaos, you'll spot a brick-red building, neatly painted and maintained.

This is St Stephens Church. It is all of 140 years old, but wears its years lightly.
The church was built ten years after the 1857 'Sepoy Mutiny', in memory of Christians who died during the Siege of Delhi. It is in a rectangular Romanesque style, but to truly appreciate its real beauty, you have to view it from the side (which is kinda hard, given how crammed the sides are, with other buildings!).

The inside of the church has surprisingly high ceilings - the decoration is baroque, and the stained glass circular Rose Window is beautiful. The interior is still in good shape. If you want to take a look, go on a Sunday morning, when the church is open.

Here is what St Stephen's looked like in 1872: see what I mean by having to look at it from the side? The arches are elegant - they're made of yellow sandstone and are beautifully carved. I also like the pleasing proportion of the really tall bell-tower. 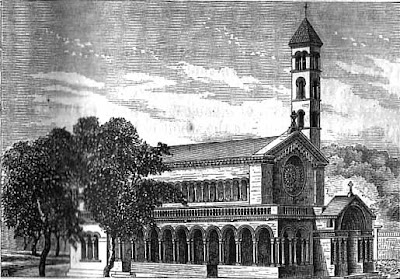 The Mutiny - also called The First Indian War of Independence - was the first wide-spread uprising against the British East India Company. The rebel forces gathered under the banner of the Mughal emperor Bahadur Shah Zafar. Fighting was concentrated primarily in North India.

Delhi saw a great deal of violent bloodshed, and indeed, marked the turning point in the war. When the rebels lost the Siege of Delhi, it brought about the end of the Mughal empire. Bahadur Shah's sons and grandsons were killed, and he was exiled. In 1858, control over India was transferred from the East India Company to Queen Victoria, thus marking the beginning of the British Raj.
3 comments:
Email ThisBlogThis!Share to TwitterShare to FacebookShare to Pinterest

A lesson in paan counting 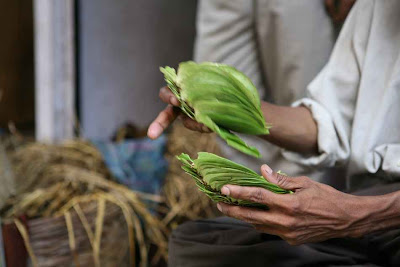 Sure, you've counted currency notes many times in your life.
Ever try counting leaves?
I saw this man in Old Delhi, his fingers were flying from one paan leaf to the next.
What arrested my attention, actually, was how gentle he was with the leaves.
The photos can't capture that...the finesse and care with which he handled them. 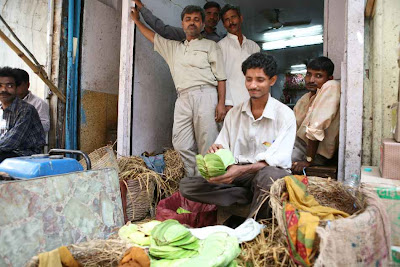 When the counting was done, the leaves went into little baskets.
They were covered with damp cloth, to protect them from the sun.
And from this wholesale market, they went to little retail outlets all over the city. 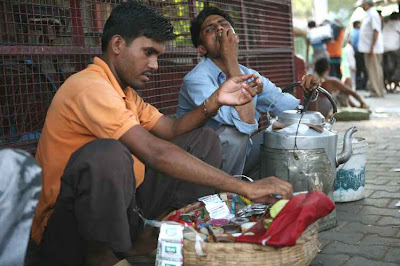 If you're wondering what a retail outlet for paan is like, look no further.
I found this paan-wallah opposite Red Fort. See the leaves, hidden in damp red folds of cloth?
Next to the paan-wallah is a chai-wallah - with his trademark aluminum kettle.
These two guys are cultural icons of sorts, so this photo is almost a Delhi cliche.

Enough and more has been said about paan. Bloggers blog about it; paan aficionados dedicate websites to it. Bollywood celebrates it in song and dance. Mouth freshener, palate cleanser or digestive - whichever way you look at it, you either love it or hate it.

Me, I'm a firm hater. I don't like the sharp raw taste of the leaves. The lime irritates my mouth. And if that's not enough, here's the final decider - I'm so not into bright red lips. If you peer into my purse, all you'll find is a sensible brown lipstick for day time wear, and a sultry purple for the evening. I'll leave the bright paan-red lips to the Noor Jehans of the world.
2 comments:
Email ThisBlogThis!Share to TwitterShare to FacebookShare to Pinterest
Newer Posts Older Posts Home
Subscribe to: Posts (Atom)