As of Dec 15, the old currency notes are no longer accepted as tickets at the Taj Mahal. They've started accepting payments by credit card now, so you can swipe a card at the counter. Huzzah. No more cash woes.

You can also buy tickets online at the ASI website: https://asi.payumoney.com/

Here's what the Scaffolding at the Taj Mahal looks like now: 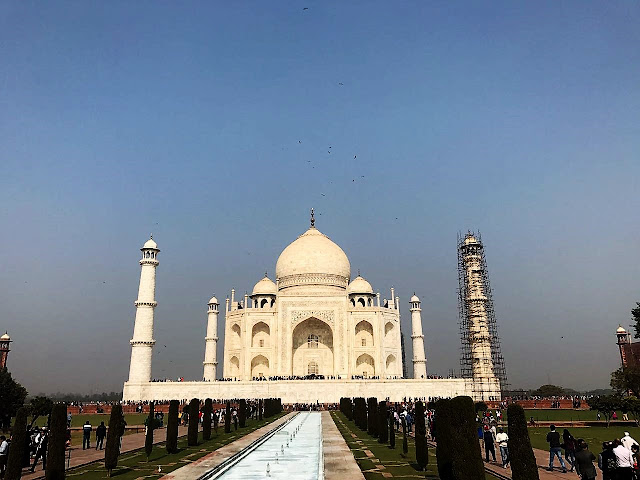 This photo is clicked in the afternoon around 1:30 p.m. yesterday. Morning temperatures are at 8 C (47F), rising to 22 C (72F) in the afternoon. Nights are cool again.
No comments:
Email ThisBlogThis!Share to TwitterShare to FacebookShare to Pinterest
Labels: Agra, Delhi, Taj Mahal

Portraits of labourers in Delhi (2)

What words would you use to describe the people in this photo? Relaxed? Happy? Yes. They're having a nice break, waiting for work.

But there are two more words that come to my mind, and those are not-so-nice: Uneducated and Unskilled.

The informal sector in India is characterized by uneducated and unskilled labour.

Education levels are abysmal. One-fourth (23%) of informal labour is illiterate; having never gone to school. About 10% have studied upto primary school. So that's one-third of the labour force, which doesn't really know how to read or write much. They are vulnerable to exploitation, not just by employers and middlemen, but also by moneylenders. Roughly 48% of workers in the informal sector have studied until Grade 10.

In addition to the poor literacy levels, informal labourers do not have specific vocational training or skills that will bring them better paid jobs. Thus they bring literally nothing to the bargaining table, and must make-do with whatever current rates are offered to them. More than half of the informal labour force is self-employed. This makes it even more difficult to negotiate for improvements.

At the end of the day, it's about education. Until we improve vocational skills and ensure basic literacy, we're going to keep seeing low-paid, poor and unhealthy workforce.

Data source:
Confederation of Indian Industries
An Analysis of the Informal Labour Market in India
A. Srija & Shrinivas V. Shirke
4 comments:
Email ThisBlogThis!Share to TwitterShare to FacebookShare to Pinterest
Labels: People of Delhi

Portraits of labourers in Delhi (1)

These men in the photo are hired to transfer goods from shops in the wholesale markets, to waiting trucks. The gamcha, a checked towel, is a multi-purpose textile that all of them have. Almost a class trademark.

The government has mandated minimum daily wages for unskilled, semi-skilled and skilled labour, but that applies only to those who you hire for the full day. The men in this photo are probably being paid by piece / sack loaded or unloaded.

No comments:
Email ThisBlogThis!Share to TwitterShare to FacebookShare to Pinterest
Labels: People of Delhi 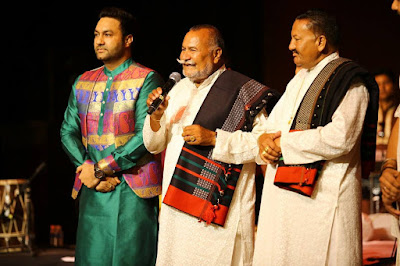 Thus, Sikhism and Sufism have many linkages, and they are not just at a philosophical level. Did you know that the foundation of the Golden Temple at Amritsar was laid in 1588 by a Sufi mystic, Hazrat Mian Mir? Guru Arjan Dev sent a palanquin to fetch Mian Mir to Amritsar from Lahore!
2 comments:
Email ThisBlogThis!Share to TwitterShare to FacebookShare to Pinterest
Labels: Faiths of India, Music 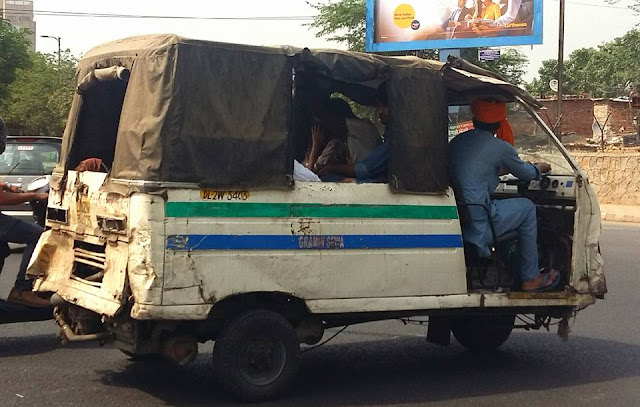 Recently the AAP government has checked and renewed licenses for 4200 of the original 6000 Gramin Seva vehicles. Hopefully some of the really decrepit ones have been thrown out. They have made it mandatory for the vehicles to be fitted with a working GPS, so that it is easy to track whether a vehicle goes out of its assigned route. Will things improve? We can only hope!
2 comments:
Email ThisBlogThis!Share to TwitterShare to FacebookShare to Pinterest
Labels: Delhi, Indian highway, Indian roads, New Delhi, People of Delhi, Travel in India

The ruins at Hauz Khas are a happy place to spend the evening catching up with friends. Amidst the medieval architecture of an old university complex, you can find a quiet spot to relax. 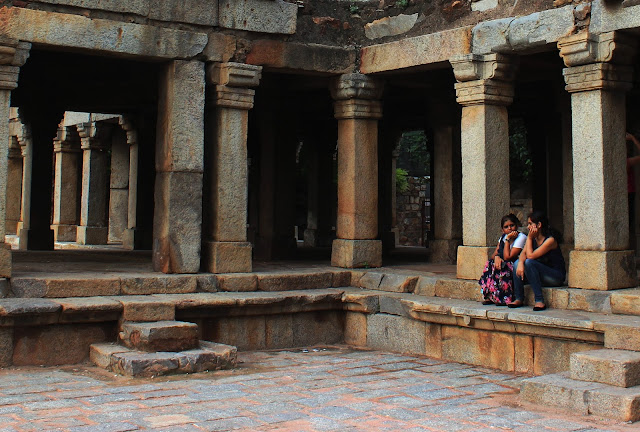 After the sack of Baghdad by the Mongols in 1258, Delhi became the most important place in the world for Islamic education. Many leading philosophers and teachers migrated to Delhi. The university at Hauz Khas was established in 1352, and became one of the largest and best equipped Islamic seminaries in the world. 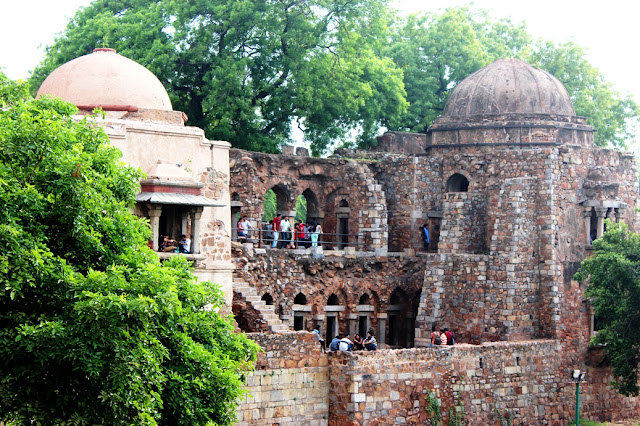 They university came up around a beautiful Royal Tank (Hauz Khas). The tank was originally dug by the Khiljis in the 1200's, but it was deepened and improved by Firoz Shah Tughlaq (1309 - 1338). Can you imagine how beautiful this university must have been? It is a green oasis even now. Firoz Shah Tughlaq's tomb is also there, in the building on the left. 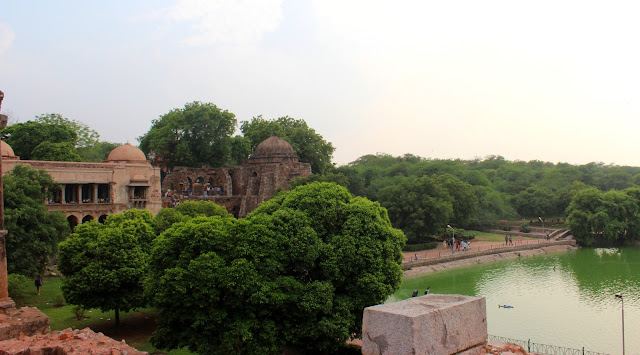 On weekends, Hauz Khas is very popular. Here's a group that was playing the guitar when I went: 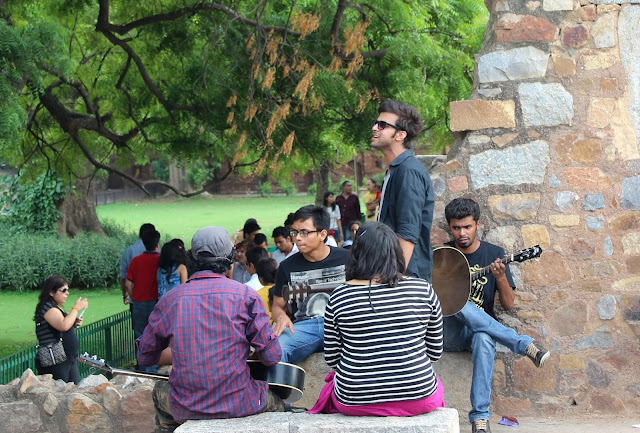 Another bunch of people were practising parkour: 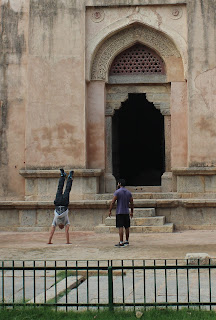 There are usually lots of people around, but you can still find quiet places to sit and chat. Or have a romantic moment. See these photos below, for glimpses of a Sunday evening at Hauz Khas. 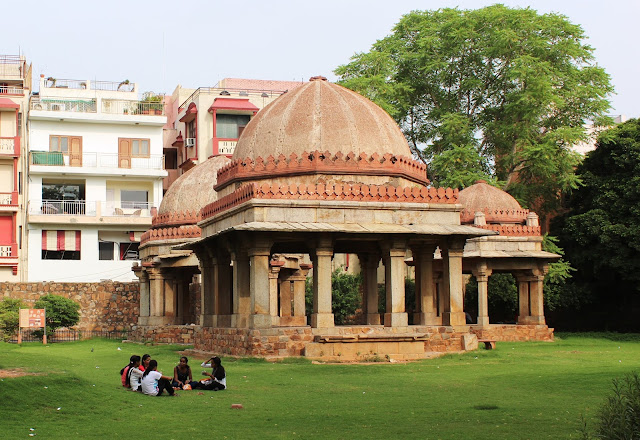 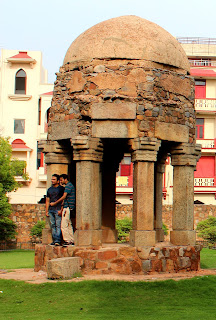 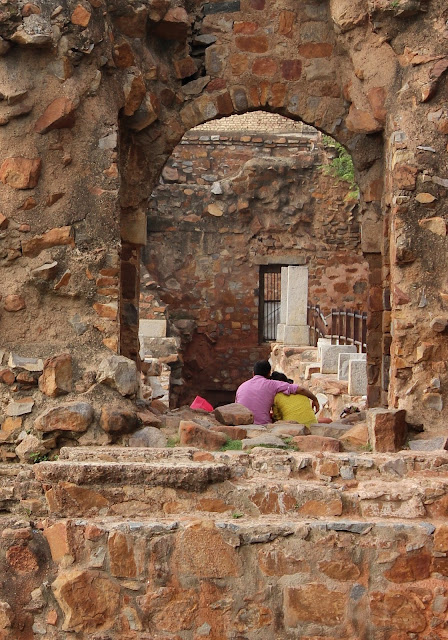 So many people, each lost in their own world :) Perhaps just a handful of them knew the history of Hauz Khas; or that algebra was once taught here, and astronomy, and poetry, and calligraphy and geography.
8 comments:
Email ThisBlogThis!Share to TwitterShare to FacebookShare to Pinterest
Labels: Delhi, History of Delhi 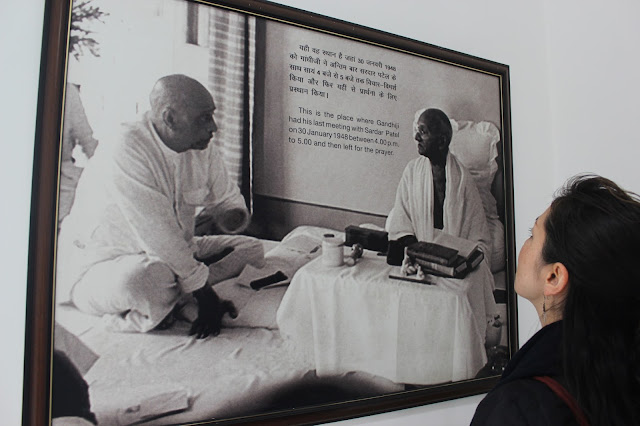 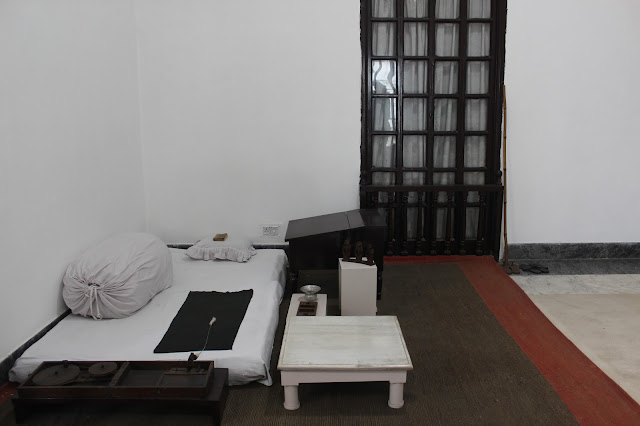 Gandhi is not a man, Gandhi is an idea. He is only dead if we let the idea die.
7 comments:
Email ThisBlogThis!Share to TwitterShare to FacebookShare to Pinterest
Labels: Delhi, History of Delhi, Museums, New Delhi

Scaffolding at the Taj Mahal 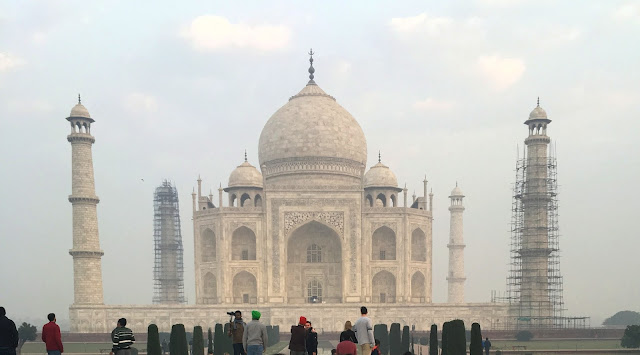 It is on two of the minarets, one at the front and one at the back. Photo clicked 6-Jan 2016. The scaffolding is temporary and meant for cleaning and restoration of the marble. I don't know when it will come off. I will post an update when it does.
4 comments:
Email ThisBlogThis!Share to TwitterShare to FacebookShare to Pinterest
Labels: Agra, Taj Mahal
Newer Posts Older Posts Home
Subscribe to: Posts (Atom)