Life in Delhi under the Last Mughal

I have been reading Dalrymple again; in particular his description of Delhi in the mid-1800's. What an interesting period it was!
During the reign of the last Mughal Emperor, Bahadur Shah Zafar, Delhi was a city of learning and arts; there was patronage for poetry and painting, great colleges flourished.
But to me, the most interesting feature is that under Zafar, the citizens of Delhi, both Hindus and Muslims, seem to have lived a life without undue religious coercion and fear. 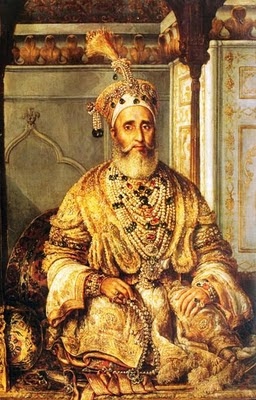 Upper class Hindus, says Dalrymple "went to the Sufi shrine of Nizamuddin, could quote Hafiz, and were fond of Persian poetry". Hindu children from the administrative Khatri and Kayastha classes studied under maulvis. Among the most popular local festivals was the Sair-e-Gul Faroshan (Phoolwalon ki Sair), a festival where Mughal royalty made offerings at both a popular dargah and a temple in Mehrauli.
For many generations, the Mughals had married Hindus; Bahadur Shah Zafar himself had a Rajput mother. He had a team of Hindu astrologers who advised him on many matters; and he followed the old Mughal custom (borrowed from Hinduism) of drinking only water from the Ganges. The Hindu festivals of Holi and Dussera were celebrated in the Red Fort; the burning of the Ravan effigy in the city during Dussera was watched by the Emperor himself.
I do not quite know how to describe this sort of life; a sort of fluid co-mingling of religions. I do not want to use clichés about "harmonious" Hindu-Muslim relationships...in reality, the two communities led distinct and separate lives, but there was a meeting and coming together; some for fleeting moments and some for longer intervals.

It reminds me of my school biology lessons, where we drew shapes of cell fusion. Maybe that's the best way to describe life in Delhi in those days. Cell A and Cell B lived together, each maintaining a separate identity. But there were meeting points. Some meeting points, like the bazaars, were physical places, where communities interacted. Some were events and festivals, where the populace came together to celebrate something or pray for similar boons. For a short while, then, at these points of contact, there was fusion, and then the cells went back to their original separate state.
But eventually, the two cells started resembling each other in many ways. In matters of food, fashion and clothing, architecture, and ornamentation, there was a great mingling of cultures. Muslim women pierced their noses, after the fashion of Hindus. Muslims lit diyas on the tombs of saints, a practice followed in Hindu temples. They sang songs at shrines, and consulted Hindu holy men and astrologers. Although there was a core that would never change (and even today, these cores remain different), there was definitely a lot of fluidity and intermingling.
This tolerant state of affairs continued with the support of the Emperor, but in parallel, there were also other less liberal influences. A more orthodox form of Sunni Islam, supported by rich Muslim businessmen from the Punjab, had taken root in Delhi.
This version of Islam had found its way into Delhi in the 1700's under Shah Wali Allah; and was propagated further by his sons. Shah Wali Allah was born at a time when the Mughal empire was in a state of political decline; and he believed that this was because the court had become corrupt and debauched (and certainly anyone looking at the pleasure loving folks that ran the Mughal Empire could be excused for thinking so!).
Shah Wali Allah believed that Muslim downfall was because people had stopped adhering to the pure tenets of Islam. So he advocated a simpler, purer life, a "Return to the Koran", so to speak. He translated the Koran into Persian to facilitate its understanding among all the Muslims of India (this is believed to be the first complete translation of the Koran from the Arabic by an Indian Muslim scholar).
By the mid-1800's Shah Wali Allah's brand of Sunni Islam was firmly entrenched in Delhi, and it was directly in conflict with Bahadur Shah Zafar's brand of Sufism.
And then - setting fire to the tinderbox, perhaps - in the 1840's and 1850's, a new breed of pious Evangelicals descended upon India. In Delhi, they were represented by the zealous Padre Jennings (an unpopular man by all accounts). He arrived in Delhi in 1852, full of religious bigotry, and famously declared that he would spare no efforts to spread the Christian faith. "A strong attack must be made somewhere," he said, "and I hope we shall see it made here".
For the first few months, he made no headway, but then the first conversions began, and it created ripples of alarm in the Sunni circles. Earlier, the officers of the British East India Company had freely mixed with the Mughal courtiers, and several had married Muslim women. They spoke fluent Hindustani, some spoke Persian as well; and they had close relationships with their sepoys. But the new breed of Company servants were influenced by the Evangelical brand of fanaticism; and soon began to veer away from all ties with "heathens", severing the close relationships they had with their own troops and sepoys. 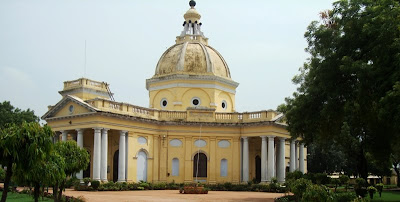 St. James Church, where the first baptisms took place in Delhi under Padre Jennings
Thus the stage was set for a clash between not just Christianity and Islam in India; but also between the Company Sarkar and its Hindu sepoys, leading to the great uprising of 1857, and the end of the Mughal dynasty. In 1858, the British razed the Al Rahimia madrasa of Shah Wali Allah to the ground, bent on stamping out every trace of it.
But from the ashes of that fire rose the Deobandi movement, formed in 1867. It is an orthodox and strict interpretation of Islam, which continues to influence life in India and Pakistan. The Deobandi branches of Pakistan have traditionally been the hotspots for the jihadi movement; and many of the Afghan Taliban have been schooled in Deobandi madrasas.
And so, the death of the last Mughal ruler was not just the death of an empire, but also of state patronage for a more pacifist, liberal, tolerant form of Islam. More's the pity, I say.
Fortunately, even without state patronage, Sufism is alive and kicking. The powerful mystic call of Sufism remains a common thread that unites Indians and Pakistanis; and can be seen in the many popular Sufi shrines that dot both countries. 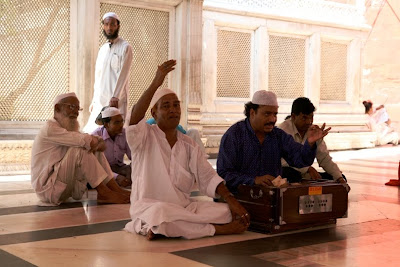 Quwwals still sing at Nizamuddin Dargah, which Bahadur Shah Zafar visited often
Here, in these shrines, the sound of music continues to resonate, and the faithful of all religions continue to flock to seek blessings. If you want to hear a fantastic example of the songs of the Sufis, you must listen to the maestro Nusrat Fateh Ali Khan. Here is one of his live performances; the music is uplifting and appeals across all borders.
Email ThisBlogThis!Share to TwitterShare to FacebookShare to Pinterest

Very nice post. The harmony of Indian Muslims and Hindus in Mughal era is something we have forgotten in post partition era. We need take those books out where this is all written and share that with our youth who is getting more indulged into anti-harmonious acts.

Thanks for your effort.

Great Post, Deepa. I really enjoyed Dalrymple's 'The Last Mughal' as well. He was a renaissance man in 'renaissance' times in Delhi - with poetry, arts, singing, literature at its peak and religion not defining our station or standing in these spheres.
Sufism is truly alive and still 'beyond religion' kind of philosophy.I remember getting introduced by my mama (uncle) to quawalis during urs at Hazrat Nizzamuddin Auliwa's dargah and over time, getting to appreciate that genre. Truly uplifting.

Love this history post and its tie into today. It's especially informative for someone like me, from the West that didn't study much of this history in school. Thanks.

I too am reading Dalrymple's "The Last Mughal" and find it fascinating. I am looking forward to my second visit to Delhi where I will see and appreciate its history with new eyes. And you should check out Dalrymple's latest, "Nine Lives" -- which consists of the stories of 9 individuals of varying faiths.

Thanks for such a brilliant post. I have'nt read The Last Mughal, but like Dalrymple and have read his book - From the Holy Mountain: A Journey in the Shadow of Byzantium.
Thanks for sharing such wonderful information with all of us.

Great post! Even today the Phoolwalo Ki Sair starts from Yogmaya temple, a perfect example of some great traditions of mutual harmony still being followed.

This is very nicely written. I particulary love the part where you compare the common life to cell fusion.
The funny thing is that I was looking for images of biological cell fusion as a metaphore for Merger & Aquisition in Business.

very nice post and i liked most your describing system :)

I was greatly fascinated by the vivid account written on the harmony that existed between the Hindus and Muslims of Delhi in 1850s. Going back in History, one would realise that barring Aurangzeb, the seeds of secular India were actually sown by none other than the Great Mughal monarch - Jalal ud din m
Mohd Akbar, who not only married Harka Bai, the Hindu rajput princess of Amer, but also evolved Deen e illahi a fusion of Hinduism and Islam. Kudos to such visionary manarchs for promoting religious tolerance in times when votes did not matter. Their contribution towards secularism is immensely fascinating !

where the muslims tolerant of hindus marrying Muslim woman, or are we to beleive that secularism means only Muslims marrying Hindu women and converting them to islam and bearing children that would grow up muslim. Thus they could marry as many Hindu women and grow their tribe