I learn about the Trees of Delhi

Every time I drive past the shady avenues of Lutyens Delhi, I look at the trees lining the roads, and wonder what they are.
Are they local trees, native to Delhi, planted in straight lines along the avenues when Imperial Delhi was created? Or have they been imported from elsewhere? When do they flower? How are they pollinated? What happens to the fruit? A zillion questions; and no answers!
This week, by some blessed chance, I spotted this book at an airport bookshop. Pradip Krishen's "Trees of Delhi" - a fantastic 360-page book of the most interesting tidbits and trivia. I am now a fan. 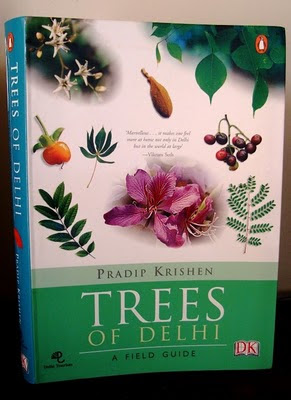 I discovered, through this book, that the trees in Delhi have wonderfully evocative names. In fact, they're lovely enough to invent an entirely new alphabet string for Delhi's schoolchildren!

A for the golden Amaltas
B for Lord Shiva's favourite Bael
C for the maple-like Chinar
D for the showy orange Dhak...

Ah, when am I going to learn all of them? But I'm determined to make a start! So here's where I'm beginning - with the big line of trees all along Rajpath and India Gate. Quite a fitting start, don't you think? 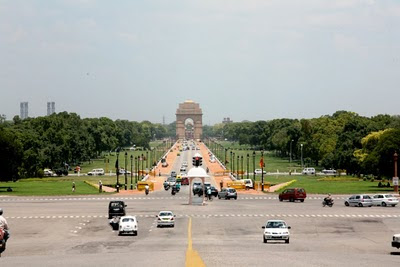 These beautiful dense green trees are rai-jamun (R for the blessedly tart Rai-Jamun! There! One letter done!).
Wondering what a rai-jamun is? It's a tree from the myrtle family, a species of flowering trees that grow widely around the world, primarily in Asia and Australia. It is evergreen in nature, which might explain why this sort of tree was chosen by the city planners to line this important road. If a deciduous tree had been chosen, it would shed its leaves in the scorching hot Delhi summers, you see? That would not have suited the British planners of Imperial Delhi, who definitely wanted a very green Delhi.
Here's a report from Captain George Swinton, Chairman of the Town Planning Committee, sent in 1912, referring to the creation of Imperial Delhi:
Trees will be everywhere, in every garden however small it may be, and along the sides of every roadway, and Imperial Delhi will be in the main a sea of foliage. It may be called a city, but it is going to be quite different from any city that the world has known.
Quite a vision, eh? So the evergreen rai-jamun found favour with the planners; whereas many other earlier Mughal garden favourites lost out.

Both rai-jamun and jamun were planted by the British. The rai-jamun was planted on Rajpath and India Gate; and the jamun, the most popular of the Lutyen's avenue trees, was planted on Tughlaq, Rajaji, Motilal Nehru, etc. In case you're wondering what the difference between jamun and rai-jamun is, here's a dummies guide :)

So if you walk past India Gate in August, you'll be eating the smaller jamuns! Every year the Delhi civic authorities auction the rights to collect fruits off the avenue trees. Fruits are either hand-picked or more popularly just shaken down (all fruits on a single tree don't ripen at the same time, so shaking makes sense). The jamunwallahs at India Gate sell it with chaat masala. Or is it kala namak? I'm not sure, so if you know what it is, then tell me!

Meanwhile, I'll just head back to my book and look up more trees. I can't think of a better way to spend Sunday :)
Email ThisBlogThis!Share to TwitterShare to FacebookShare to Pinterest

Deepa,
Looking forward to some more posts on this theme. One of the most memorable experience of my school life was to organise what we had called a 'Vasant-otsav' (a festival of Spring). During this 4 days festival, we had arranged lots of activities related to nature and spring (music, art, food, activities). One of those events was nature walks to Lodhi Gardens which is stone's throw away from Sardar Patel, my alma mater. We had approached Khushwant Singh and he had agreed to lead these morning walks with 20 kids at a time. He knew names of almost all trees in Lodhi Garden (and there are 100s there!) and had an eye for spotting birds and identifying them (no pun intended!). I absolutely loved those walks and he made them so special by showing his passion for nature and sharing stories of how tree line in Delhi shifted with different rulers but one thing that Delhi was always blessed with was that all rulers wanted to make it beautiful and green !...I hope Delhites and politicians continue to aspire for this ideal.
Vandita

I remember crossing Delhi with a botanist who commented that the choice of trees was important to maintain aquifers. Delhi's aquifers are now drying up because the of the move to plant more eucalyptus trees which take up a lot of water.

If we had fruits growing along Mumbai, nobody would go hungry. Interesting read - great going, Deepa.

I'm constantly amazed by just how lush and green Delhi is, even in the middle of summer, many months since the trees have seen a drop of rain. Can you shed any light on that?

Come to think of it, the Jamun is very rarely seen now a days.
I remember the number of times we had to hide from our parents to go and pluck the jamun and eat them (it was forbidden at home as it produces permanent stain on the clothes)

Great post and please do enlighten me with more trees & their related info. I hope I can grab a book on trees in bangalore !
You are a superb writer, like your blog a lot - very varied topics. Keep up the enthu. Thanks for the report from 1912, interesting and the differences between rai jamun and jamun.

Great post.. I too have this book but not read it..will do so immediately.

The jaamunwallas sell thier jaamuns fresh off the trees ,on the roads of new delhi.

Ms Krishnan, These days (Autumn to be precise), theres a tree that flowers and gives aroma very similar to catechu or betel. Do you know which tree is that?

Hi..Come plant a tree with us.
:-)..connect with peepal baba and his give me trees trust on fb to know more about the work we do