I walk into a wheat field

Have you seen wheat being harvested anywhere in India?

I hadn't seen wheat farming up close, until I walked into a golden-yellow wheat field in Rajasthan last week.

I was on a trip to Agra and Bharatpur, with my friend Stephane. Everywhere along the highway we saw big overloaded tractors, looking like very pregnant cows, trundling along. 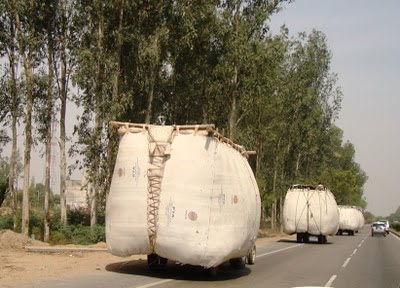 "What are they carrying", I asked our driver. "Is it wheat?" I knew that in North India, March / April is the month when the wheat crop that is sown in November is harvested. Mustard too is harvested at this time.

The driver smiled at my city-bred ignorance, but said kindly "Na, na, madam, it is the left over dry grass after the wheat is harvested. It is used for fodder."
Ah, I nodded, realising my stupidity. Of course. The wheat is harvested in the field, threshed, and only the grains are transported to the market. These huge overstuffed straw bags were too flimsy to possibly contain the precious grain.

We drove further along, and in many fields, I saw women and men harvesting the crop by hand.

"I'd love to go into these fields", I said to Stephane. "Just to see what it's like, you know?"

As luck would have it, we met a guide in Bharatpur Bird Sanctuary, who was also a farmer. He was perhaps 50 years old, a grizzled and seasoned birder. We chatted about birds and Bharatpur's seasons; but it was too hot to go bird-watching.

So I asked the guide: "Can you take me to see the harvest?" He said yes, and in 20 minutes, Stephane and I found ourselves rather unexpectedly walking through a golden wheat field! 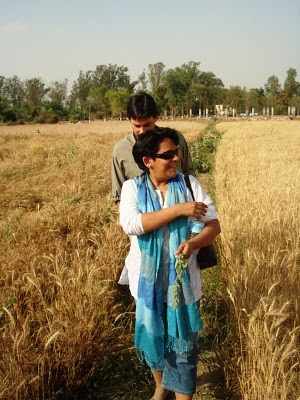 On both sides of the small dirt embankment, the wheat crop was ready for harvesting. The first thing we did was to pluck a single stalk, rub it to remove the chaff, and taste the wheat. You know the most surprising thing? The grains were soft, not hard. I was expecting it to be exactly like store-bought grain, hard to bite. But no, it was chewy and lovely to nibble. I remembered the famous Aesop's fable about the Town Mouse and the Country Mouse. I felt like I had actually transformed into that Country Mouse! Wholesome wheat grains everywhere but no fancy pantry with sugar and treacle and ham and sausages in sight! 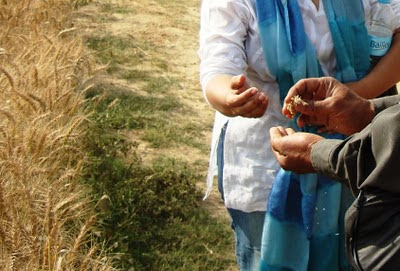 We walked further along and came to where the women were at work. It is not an easy job. Work starts early in the morning, and continues through the day, although temperatures at noon can be something like 30 - 35 C.

We were a welcome diversion; but not until our guide walked away did the women begin to chat with me. I didn't understand their silence at first, until our guide explained it to me - he was the senior member of their family, and in his presence, the women would maintain a modest silence, and would not unveil themselves. 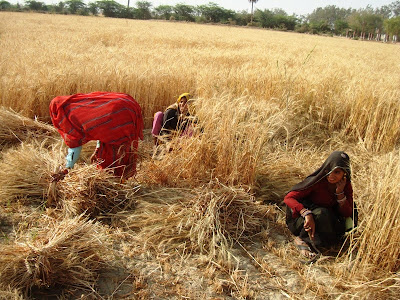 But when he left, the women transformed into a chatty, laughing trio. They were as curious about me, as I was about them. Where do you live? What work do you do? Where are you going? They peppered me with as many questions as I did them.

I was curious about the sickles, so one of the women lent her sickle to me. I hunkered down to examine it. It was surprisingly light, and unlike the smooth curve that I was envisaging, it had a pointy inside edge. I realised the women were actually using wrist /muscle power to hook the knife around the wheat and pull it at a particular angle, slicing through the wheat stalks with a smooth technique. 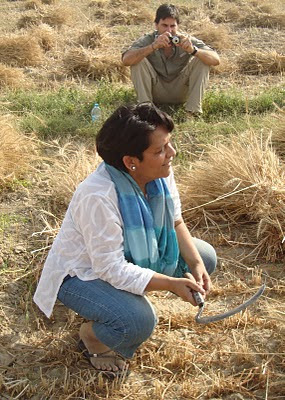 "Man, how do they sit like this the whole day long", asked Stephane, who - in true tourist fashion - was quite amazed by how comfortable the women were in the squatting position. "Isn't it murder on the knees?" 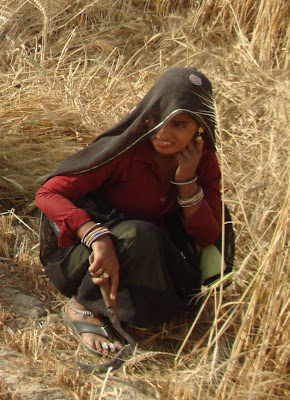 I very wisely decided to find a more comfortable cross-legged position on the edge of the field. (Behind us you can see the other side of the field, which the women had already harvested) 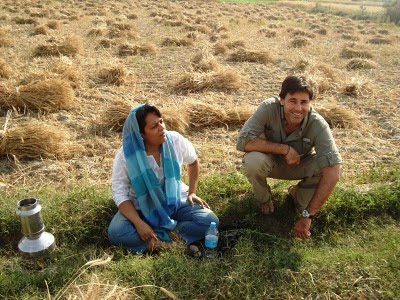 I spent a happy 15 minutes sitting cross-legged, chatting and exchanging stories. Although initially I was a "city-mem", a stranger to the women, somewhere along the conversation, things changed and we became friends on a more equal sort of footing. Must you go? Can't you stay longer?, I was asked. I was invited home for dinner, and to stay the night if I wished. (I am always humbled by the hospitality and kindness I experience in rural India - no matter how poor people are, the genuine warmth that they extend to complete strangers is amazing). 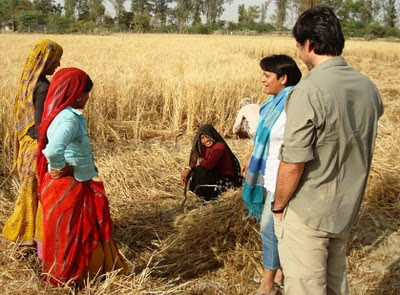 I was also offered some advice on the importance of having male children. In fact, the women were quite distressed to hear I had no sons.

I said no, I had only one daughter, but she was pure gold ("Lakhon mein ek hai meri beti").

They shook their heads. That apparently didn't count.

"Ek beta hona chahiye", I was told, somewhat sadly. You must have a son.

Uh-uh. No dice. I had to have a son, for my own good. "Phir bhi, ek beta to hona chahiye, behen. Ek beta jaroor kar lo aap"

It was advice lovingly offered, to someone who they thought would benefit by listening to it. What could I say in the face of such utter conviction? I gave up, and smiled and told them, ok, next time I'll come here with a baby in my arms! We all laughed, and I waved goodbye...

...But as I was walking out with our guide, I wondered when these attitudes would change, and when these women would stop viewing themselves as second class citizens. Will the new Women's Reservation Bill be able to change anything in this village? I don't know. Not in this lifetime, perhaps. 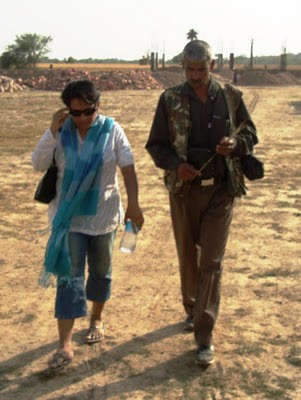 Still, I was glad I spent some part of the afternoon here with these women. Living in my elitist "emancipated" world, I had forgotten the ground realities. Seeing the lives and beliefs of these women brought me sharply back in touch with the real India. I remembered Mahatma Gandhi's famous trip through the country, to meet the people of rural India. How much he must have learnt and observed as he spoke to his fellow countrymen!! Not surprisingly, it transformed his life and influenced his economic and political policy.

As usual, the brush with rural India had left me both elated as well as depressed. This sort of contradiction defines my love-hate relationship with my country. I marvel at its beauty, delight in its simplicity, but know there are many changes needed, and that there is a grim, long road ahead.
Email ThisBlogThis!Share to TwitterShare to FacebookShare to Pinterest

The bias just shows up in one form or the other all over the world...you just have to scratch the surface. Why do women have to take their husband's name after marriage ?

I absolutely loved this post, from the description to the harvesting to the chattering with the women (topic included). So glad you decided to take the tour!

Nice to know all the details about the wheat farming.

If boys get parents to heaven what happens to the parents with girls -somewhere in between, perhaps?
So if heaven is above (beyond the sky)hell is underground - the parents turn up as birds - maybe that is it.
Reconcile to birdhood :->

the last two lines of your post kind of sum how many indians feel. India has so much to give and so much more to grow!

I came here after googling 'sickle indian lady', and loved the post. Thanks for sharing your experience 7 thoughts!

Can I use one of the pictures from this post?

Sure Jayshree, go ahead and use it.