And the chilli conquers India 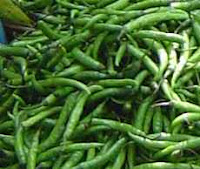 Every Indian woman knows this simple truth: the chilli rules the kitchen. Ground into paste, or sprinkled as powder, red and green chillies are the secret weapons of every Indian cook.

But did you know that before the Portuguese brought it to India, no one in India ever used chillies?

Seems unbelievable - but apparently, before Vasco da Gama came along and changed everything, we used pippali, long pepper - and not chillies. 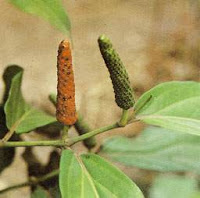 Long pepper is a strange looking thing (reminds me of a rattlesnake's tail, actually). It is native to Bengal, and in the sixteenth century, it also grew wild on the Malabar coast. According to the French trader Jean-Baptiste Tavernier, long pepper used to be thrown into Muslim pulaos 'by the handful'. It was used not just in cooking, but also in ayurveda as a cure for impotency (I'm not surprised).

So how did long pepper lose the battle to the chilli? Chillies had several advantages - they tasted similar to long pepper, but were easier to grow, and they weren't subject to mould. What's more, they were really cheap. For the vast majority of peasants, that made the chilli a really attractive proposition. So it was a price war, and at the end of it, long pepper went the way of the dodo. Even ayurvedic physicians supplanted it with chillies in their concoctions.
Barely 30 years after Vasco da Gama set foot in India, locals were enthusiastically growing chillies on the Western coast (they were called Gowai mirchi, suggesting that they were originally grown in Goa). From there, chillies spread to South India, and then to the North. Long pepper is now, I suspect, only used in some arcane vegetable pickles. I've certainly never seen it in local markets. The spice markets, instead, are full of different varieties of red chillies. Try walking into Khari Baoli, and you'll see what I mean. At the spicy end of the spectrum there's Birds Eye from the eastern parts of India, and the cleverly named Jwala (Flame) from Gujarat. There's the Kashmiri Mirchi, which is prized for the red colour it gives to food, and the small fat Gundu from Andhra Pradesh and Tamil Nadu. In general, the rule is, if the chilli is small and sharp and wicked looking, then it's probably hot as hell. Bigger, fatter chillies are less spicy, for example, the Tomato Chilly from Warangal.

The other pepper that was widely used in Indian cuisine - and which didn't lose the battle to Vasco da Gama's chilli - is black pepper, kali mirch.

Black pepper is still a traditional ingredient in several dishes. For breakfast today, I had South Indian rice pongal - rice flavoured with cumin and whole black pepper. If ever you go into a South Indian restaurant, ask for pongal. Remember that it's one of the few 'authentic' Indian dishes that you'll find!

Anyway – authentic or otherwise - Indian food is now booby-trapped with green and red chillies. So here’s a survival tip just in case you bite into one of them. What you've always suspected is right - water doesn't help. You're better off sipping cold milk, or eating an ice-cream, because they contain casein, a protein that breaks down the capsaicin in the chilli.

God save you though, if you grab a bite of this - Naga Jolokia, the hottest chilli in the world. All the ice cream in the world won't help.
Email ThisBlogThis!Share to TwitterShare to FacebookShare to Pinterest

U have such an interesting blog!

caught u in my reader.. so i will not be missing u..

Hello all, thanx a lot for tfhis article ..... This is what I was looking for.

Eating is really one of my hobby i mean part of my life and cooking is my passion. I also love going to a place and at the same time taste their delicious and most wanted food.I want to taste something that is new to my palate. Thanks for sharing your article with us.